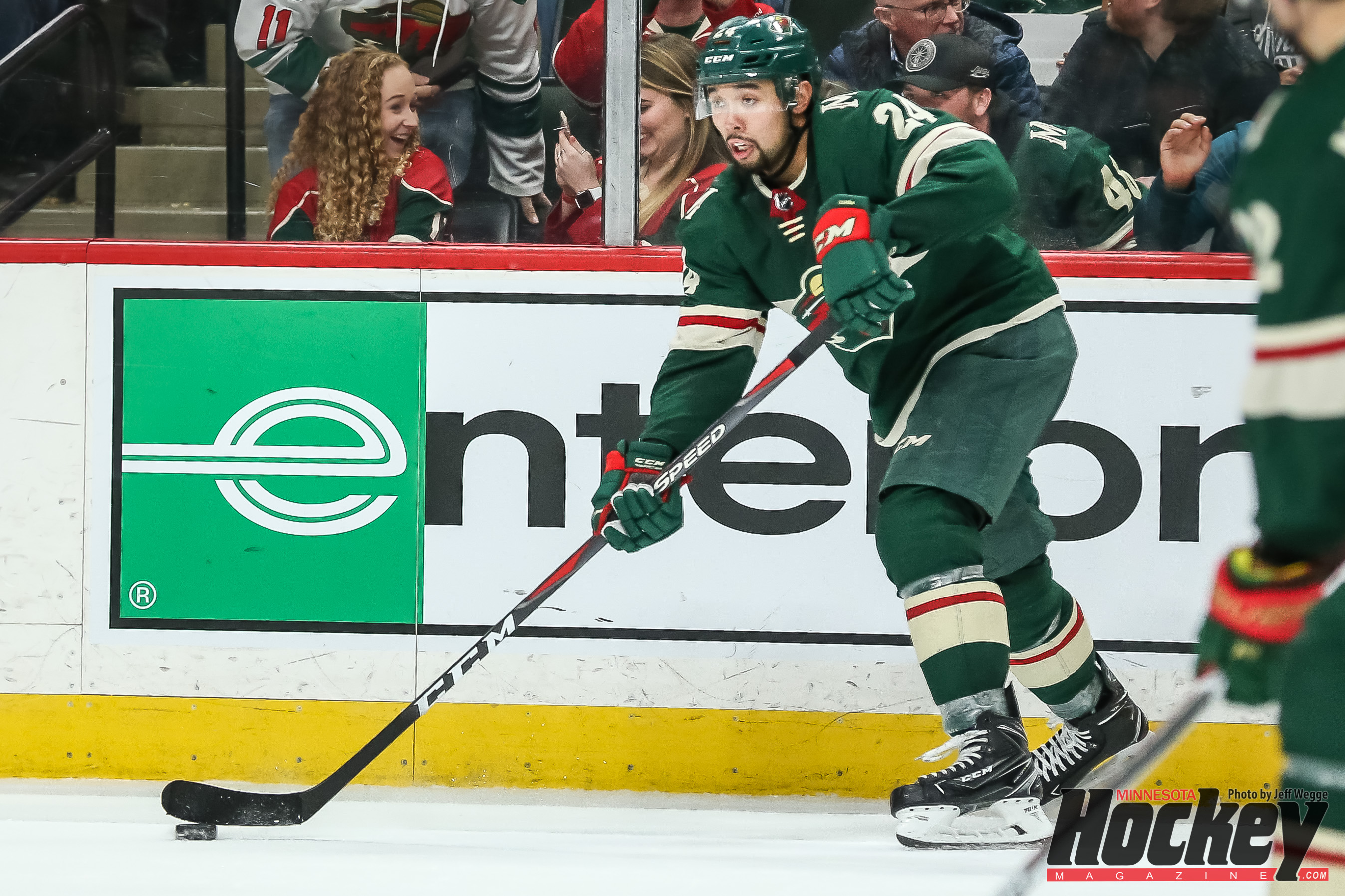 Minnesota defenseman Matt Dumba had a career-high four-point game (1 goal, 4 assists), setting a single-game franchise record for points by a defenseman, in the Wild’s 5-2 win over the Dallas Stars on Thursday night at Xcel Energy Center. (MHM photo / Jeff Wegge)

St. Paul — Love him or hate him, Matt Dumba’s impact on a game rarely goes unnoticed.

Opinions vary on his contribution to the Minnesota Wild, but the opinions are strong either way. There is no Switzerland when it comes to the 23-year-old Dumba who is in his fifth season patrolling, and sometimes abandoning, the Minnesota blue line.

He will dumbfound you with his decision making and defense as he has in recent overtime losses to Los Angeles and Boston yet has the ability to dazzle with is offense as he did in the Wild’s 5-2 win over the Dallas Stars on Thursday night at Xcel Energy Center. 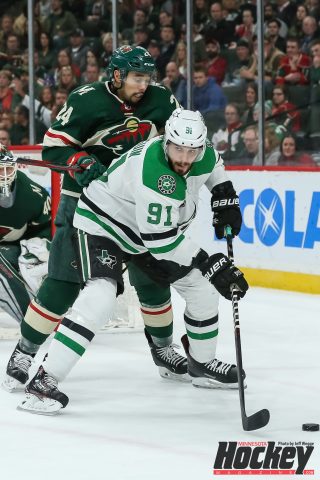 Dumba scored goal and added a trio of assists as Minnesota recovered from an early deficit to win the first of a home-and-home set with the Stars which concludes Saturday in Dallas. The win eliminates the Stars as a threat to Minnesota’s playoff hopes.

The four-point night is not only a career high, but a franchise record for points by a Wild defenseman in a single game. The Regina, Saskatchewan native’s 12 goals this season are a personal best and he extended personal highs in assists (34) and points (46).

With Jared Spurgeon missing his seventh game due to a hamstring tear, Minnesota’s top defensive pair of Dumba and Ryan Suter have been logging a ton of minutes.

The duo was tested even further on Thursday when Gustav Olafsson, inserted into the lineup in place of Nick Seeler after sitting out three games, was lost in the first period to an upper-body injury leaving him unlikely to travel to Dallas on Friday.

With two assists on Thursday, Suter set a franchise record for assists by a Wild defenseman in a single season with 45 which is also a career high.

“When Oly goes out and you have to go down to five and they play 26 and 30 minutes, respectively, and he gets four points, I think that’s what you need” Minnesota coach Bruce Boudreau said. “When your top two D play like that, your usually successful.”

A minute later, Dumba’s pass sent Mikael Granlund into the Dallas zone where he undressed Stars defenseman Greg Pateryn before one-handing a perfect cross-crease pass to a crashing Zach Parise for a tap-in goal, his 11th of the season.

“Dumbs had an unbelievable pass from all the way in our zone and then I kind of wanted to shoot it but (Pateryn) closed it down,” said Granlund, whose shorthanded goal in the first period got Minnesota on the board. “I just tried to go around him and Zach was in the right spot.”

Nearly as impressive as the pass was Parise’s reaction to it after he scored. The look on Parise’s face was that of a man in awe of the gift he had just received.

“He makes those plays a lot, he gives you those tap ins and those freebies so I can’t say I was surprised,” Parise said of Granlund. “That was a world-class play.”

Dumba later helped set up Jason Zucker’s 31st goal of the season, a power-play goal with 11 seconds remaining in the second period. The fourth and final point of Dumba’s night came on Parise’s second of the game, an empty-net goal, with another helper from Granlund.