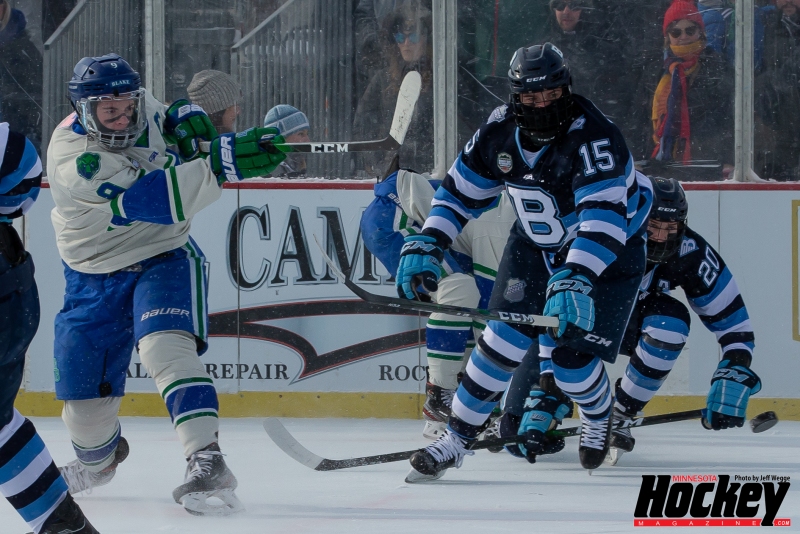 MINNEAPOLIS – Conditions on Hockey Day Minnesota were tough for everybody. Temperatures hovered in the single digits and felt much lower with brutal wind gusts and occasional snow flurries.

It’s because of those conditions that Blake boys’ hockey coach Rob McClanahan had his team do something he really doesn’t like in their game against Blaine.

“We dumped it and chased it,” McClanahan said. “We found a way to make it successful.

“It’s really hard for me to go to that style. I don’t know if everybody understands, exactly. These fellas have never done that with me, and they responded.”

From the second period on, the No. 8-ranked Bears found their game and ended up on the winning side of a 3-2 victory over Blaine with the sun shining down on Parade Stadium. Junior Joe Miller scored the game-winner with 7 minutes, 57 seconds left in the third period.

So, why the shift to dump-and-chase?

The host Bears put up 17 shots in the first period but faced a 1-0 deficit. Miller said it was frustrating for Blake’s top line, made up of Miller and seniors Jack Sabre and Gavin Best, to get a lot of chances and not score. 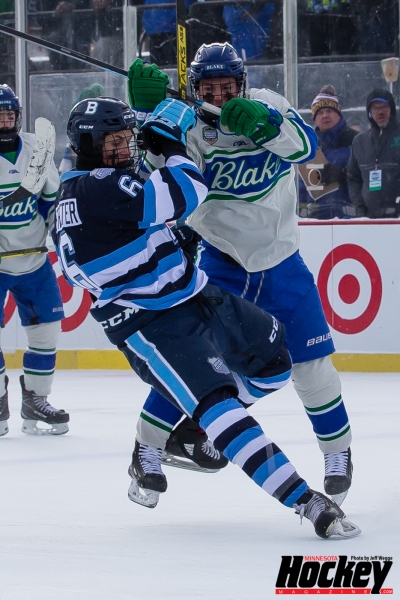 They changed their game plan on the fly in the second period, and they started winning races to the puck. Best made quick work of the team’s adjustment, getting the Bears on the board just 1 minute, 34 seconds into the second period to tie the game. The goal, with the assist from Miller, was Best’s 10th of the season and seventh in the past six games.

Blake took a 2-1 lead at the 7-minute mark of the period on a goal from senior Brett Witzke before the Bengals tied it up again early in the third period on a tally from junior Ben Wallraff.

Blaine senior Cole Hansen started the scoring only 27 seconds into the game, tallying his 16th of the season. But McClanahan wasn’t worried, adding that scoring early in a game like that isn’t always a good omen.

“I’ve been on the other side of that where we score right away and then the floodgates open the wrong way,” said McClanahan, a Mounds View hockey graduate, 1980 Olympic gold medalist and first-year head coach at Blake.

Changing the style of play after the first period was good to show just how adaptive Blake can be, Miller said. It shows they’re a dangerous team, regardless of who they’re playing, Sabre added.

“Especially today, showing that we can come out with a win after changing our style of play is good for us and good for our confidence,” Sabre said.

Miller’s winning goal, the 17th of the season for the University of Minnesota commit, went in off his shin pad on a Sabre shot from the point. It was the hockey gods shining on Blake after having missed wide-open nets three or four times, McClanahan said.

“I was just trying to get to the right place in front of the net,” Miller said. “Luckily this guy (Sabre), he was able to turn around and rip one, and luckily it just hit me and went in.”

The win for the Bears was their ninth in their past 10 games as they improved to 13-4-0 overall. The loss snapped a three-game winning streak, in which they outscored opponents 22-3, for the No. 19-ranked Bengals, who fell to 10-6-0.

Though the ice was outdoors on a field, it’s still right across the street from The Blake School. So it’s a bit like “defending your own turf,” Miller said. All the high school players who participated in Hockey Day suited up in make-shift dressing rooms located in the school. Blake’s dressing room was actually the room where Sabre said he had math class last year.  Because Blake was the host team, it likely lifted the importance of the victory for McClanahan’s players, the coach said.

“This is something that these fellas will remember the rest of their lives,” McClanahan said.

With all the preparation and hype that leads up to Hockey Day Minnesota, the players talked before the game about how it would all go by fast. They really wanted to cherish the moment, Sabre said.

“The head hits the pillow tonight, we’re going to want to remember as much as we can,” Sabre said. “So I think we did a good job of that.”