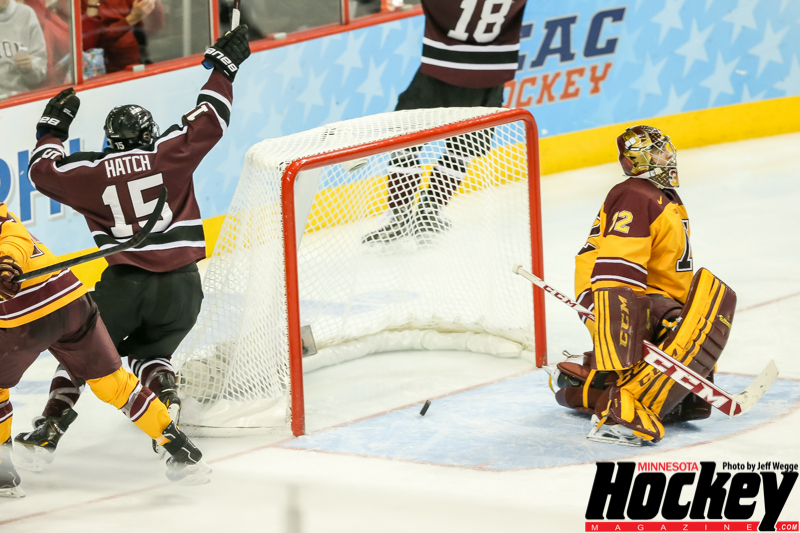 Union’s Matt Hatch (15) celebrates Max Novak’s (18) third-period goal which turned out to be the difference in the Dutchmen’s 7-4 win over Minnesota in the Frozen Four championship game on Saturday, April  12, at the Wells Fargo Center in Philadelphia. (MHM Photo / Jeff Wegge)

The Gophers took two minutes off in the first period of Saturday’s championship game at Philadelphia’s Wells Fargo Center and that was all Union College needed to seize control on its way to defeating Minnesota 7-4 for its first-ever national title in front of a near sellout crowd of 18,742.

The teams combined for a regulation-game record 89 shots on goal, second only to the 96 by Minnesota-Duluth and Bowling Green in the 1984 championship game.

“Kind of looked at the end of the year that there were kind of three teams that were BC, Minnesota, and Union, that were right at the top most of the year,” Lucia said. “Union beat BC and Minnesota back-to-back, and they certainly earned their national title.”

Minnesota led 2-1 just 10 minutes into a thoroughly entertaining contest but Union stormed the Gopher crease from there as Mike Vecchione, Eli Lichtenwald and Daniel Ciampini scored in a 1:54 span in the period’s final five minutes to take a lead it would not relinquish.

The loss is Minnesota’s first of the season when scoring the game’s first goal (18-1-5).

“They just won little battles in front of the net there and were able to put pucks in,” Minnesota forward Seth Ambroz said. “It’s just amazing how quick a puck can get in the back of your net just off little things like that.”

The Dutchmen were all over Minnesota goaltender Adam Wilcox in the closing minutes of the first period with Union’s forwards dominating the Gopher defense resulting in second, third and fourth chance opportunities upon which it capitalized.

“I’m not sure the mental part of our game matched the physical part,” Minnesota coach Don Lucia said. “We made a few mistakes tonight that we don’t normally make … I think some of that was just trying too hard, trying to do somebody else’s job.”

“They battled hard and we battled hard too and made some mental mistakes,” Gopher senior captain Nate Condon said. “That’s what costs you this time of year. When you get switched up and they get a wide open guy two, three shots in a row, you can’t expect Adam to save that.”

Wilcox, who finished with 43 saves, turned in yet another stellar performance in keeping the Gophers within striking distance of Union but, to their credit, the Dutchmen were simply too much for Minnesota’s defense on this night.

“It just came down to grit in front of the net and they got a couple good bounces that went right to them,” Wilcox said. “All they really needed was their first period and from there they never looked back.”

“We hung our goalie to dry,” Minnesota freshman forward Justin Kloos said. “He’s been our best player all year, and for us to put him through that was kind of disappointing. I don’t think you can look at anyone in our locker room and say they weren’t physically trying their hardest, but mentally I think made a few too many mistakes in that segment.”

The Gophers played shorthanded for 3:49 of the game’s first five minutes but took advantage of what little even strength time they had to grab an early 1-0 lead. Just 18 seconds after Brady Skjei’s first roughing penalty of the night, Justin Kloos put a rebound of a Nate Condon shot that Union goalie Colin Stevens thought he had controlled.

Union got on the board with a Shane Gostisbehere goal at 9:26 but the Gophers answered 29 seconds later on Sam Warning’s sharp angle goal after Stevens thwarted Kyle Rau’s wraparound attempt.

Minnesota pulled to within one just 1:13 into the second on freshman Taylor Cammarata’s 10th of the season in which he banged in his own rebound for the only goal of the second period.

The Dutchmen restored the two-goal lead 5:31 into the final period when Kevin Sullivan’s shot off a rush was deflected by net-crashing Philadelphia native Max Novak up and over Wilcox.

“We felt we were in the game the whole game,” Skjei said. “It’s the hardest lead to keep in hockey so we were never out of it.”

They weren’t as Hudson Fasching’s power-play goal with 3:40 to play made it 5-4 and Minnesota was in position for a second consecutive dramatic finish.

But a late goal by Sullivan and Mat Bodie’s empty-net goal sealed the Gophers’ runner-up fate.

“You’re hoping at that point you can get a face off in the offensive zone and call your timeout and try to make a play on 6-on-5,” Lucia said. “They did the job. They closed it out. Like I said, they are very deserving of national champions.”

“You never want to go out like this but credit Union, they came out there flying from the start and they wanted it more,” Ambroz said. “It is what it is, it’s been a fun year and I’m proud of the boys and we’ve just got to take it, learn from it and get a good run there next year.”

The loss is, of course, toughest on Minnesota’s seniors in Condon, Justin Holl, Jake Parenteau, Michael Shibrowski and Tom Serratore.

“They’ve been great since they got here and I think they’ve been the backbone of really getting us back to where we want to be,” Condon said. “A lot of selfless guys and a lot of guys that are really gonna miss playing for Minnesota and I know I’m going to be one of them.”

Condon is confident he leaves behind a team fully capable of making another title run.

“I told them I’m gone but I want nothing but success for these guys and I think that next year they’re going to do a good job,” Condon said. “We’ve got a lot of young guys, a lot of really talented guys, that can go far if they put their minds to it.”