Eagan’s Nick Wolff pitches in a goal and two assists
in the Wildcats’ winning effort. 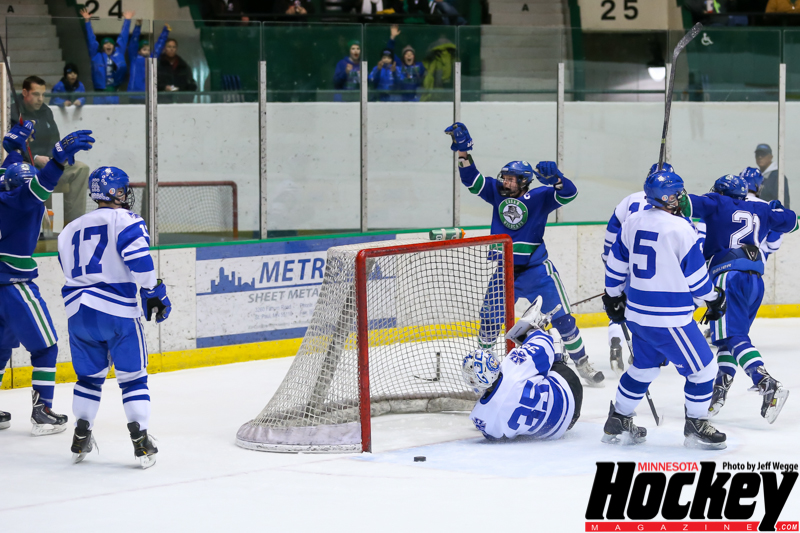 SAINT PAUL—The Eagan Wildcats rallied from a two goal deficit to defeat the St. Thomas Academy Cadets by  score of 4-2 and claim the Section 3AA title to advance to the state high school hockey tournament for the third time in four years.

Eagan’s Kyle Stebbing scored the game winning goal at 3:02 of the third period as he hammered home a one-timer past Cadet goalie Matt Snow.  The feed came from the right side of the rink after Jack Jenson and Kevin Sturgeon forced a turnover in the Cadets zone.  They took advantage of a clearing attempt high at the right blue line.  As the Cadets began to exit the zone, they got caught  and the numbers down low favored the Wildcats.  Stebbing made no doubt about it as he gave his team the lead for the first time in the game.

The lethal power play of the Cadets went to work as the game’s first two goals were scored with the man advantage.  Christiano Versich opened the scoring at 7:55 of the first period with his 29th of the season and Tom Novak fired home his 30th goal on the year for what appeared to be a comfortable 2-0 lead.

The Cadets were able to maintain possession of the puck and keep the Wildcats at bay much of the first period and a half.  It was a time that Eagan coach Mike Taylor said his team was not completely involved in the game.  “When we were down two-nothing, we were kind of going through the motions,”  he said. “The kids were staying positive on the bench, telling each other there was a long way to go and then the power play goal really sparked us.”

The power play goal was delivered by Nick Wolff at the ten minute mark of the second period and it tightened up the game and eventually Eagan was able to lean on the Cadets and take the physical game away and in turn generate more scoring chances.

“They are so deadly on the rush,” Taylor said. “They are oober skilled with Novak and Versich.  Their top two lines were really good and we always wanted to have a third guy back picking up jerseys and then just keep them on the perimeter hopefully when it came to our d coverage.”

Max Elsenheimer scored the game’s first even strength goal at 16:20 of the second period setting up the tense third period and the heroics by Stebbing.  Jack Jenson notched an empty net goal for the final 4-2 margin.

Snow faced 25 shots and was steady in turning aside 22 Wildcat shots.  The loss was just Snow’s second on the season in 13 games.  Andrew Lindgren  made some impressive stops as he made 23 saves in the win for the Wildcats.

The loss was the Cadets first in 21 playoff elimination games that spanned three years and two games into this season.  In their first run through the Class AA playoffs, the Cadets had a chance to advance to the Class AA state tournament and potentially do some damage.

Instead, the night belonged to the Wildcats, a team of players that coach Mike Taylor was proud of.  “These kids did not have a lot of success in youth,” Taylor said.  “For them to believe and them to stick together to get it done, I am really proud of this group,” Taylor reflected as he walked off the ice for the last time at the State Fair Coliseum.

Taylor will be walking back into the Xcel Energy Center where his team will have a chance to capture the first ever State High School Hockey Championship in Eagan High School history.