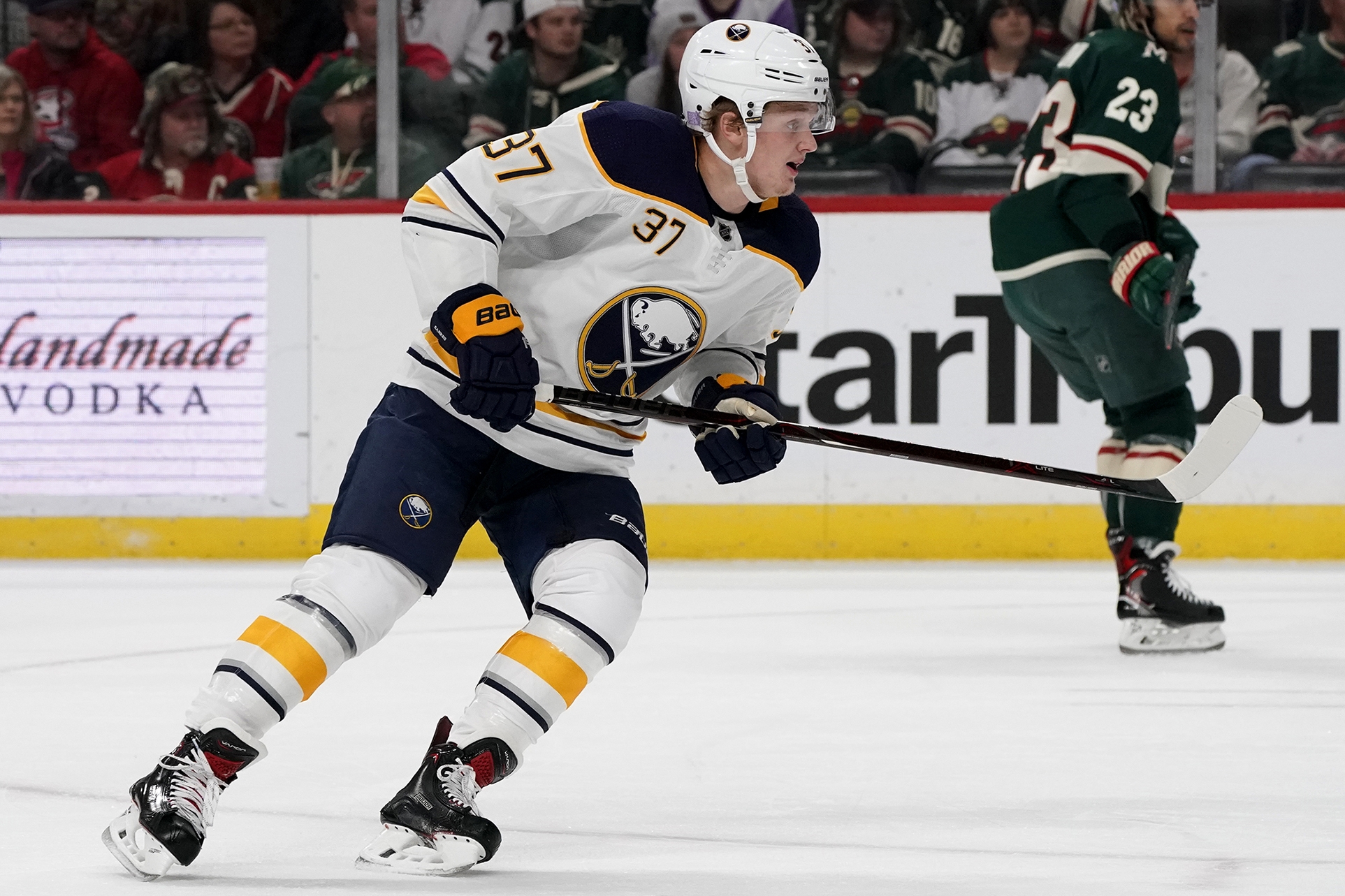 Buffalo’s Casey Mittelstadt keeps his eyes on the play in the Sabres 3-2 come-from-behind win over the Minnesota Wild at Xcel Energy Center on Saturday, Nov. 17, 2018 (MHM Photo / Rick Olson)

Casey Mittelstadt is a teenager playing in the NHL. But the beginning of his story is probably pretty similar to many other Minnesota natives across this hockey hotbed: He first put on skates as a toddler and spent hours on his backyard rink as a kid.

After all, living in Minnesota gives kids a geographical advantage, said his dad, Tom Mittelstadt.

“I wanted to put him on skates when he was young and see how it went,” Tom Mittelstadt said.

Considering his son was drafted No. 8 overall by the Buffalo Sabres in the 2017 NHL Draft, it’s safe to say it went well.

“’Dad, let’s go. Dad, let’s go skate. Come on, dad, let’s go,’” said Tom Mittelstadt, of his young son’s pleas to get out on the ice. “He spent hours out there just playing and shooting and stick handling. I think he loved every minute of it.” 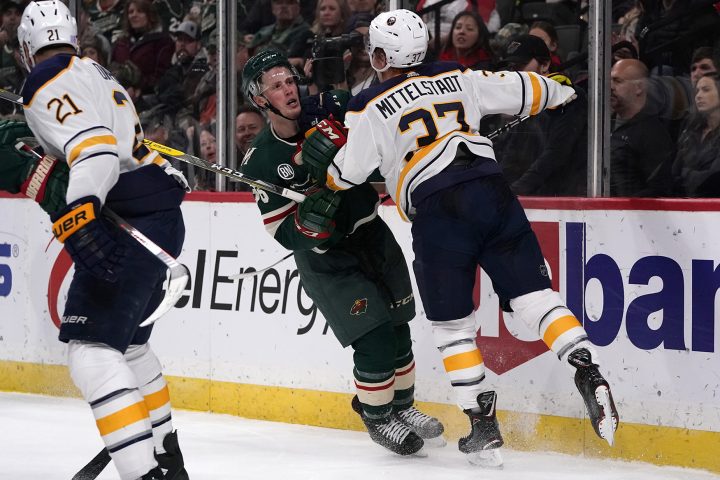 Saturday, Casey Mittelstadt came home and played against his hometown team. He played 13:31 with two missed shots and two faceoff wins as the Sabres defeated the Wild 3-2 in comeback fashion. He also got into a brief, post-whistle scuffle with fellow Eagles alum and Wild defenseman, Nick Seeler, in the third period.

Plenty of Casey Mittelstadt’s family and friends, including his parents and coach Smith, attended the game. His parents watch most of his games, thanks to the NHL TV package, plus they’ve made it to a few in-person as well.

“It’s a little surreal, I have to say,” Tom Mittelstadt said. “We’re getting more and more used to it.”

Casey Mittelstadt played at Xcel Energy Center with four Eden Prairie state tournament teams. Unfortunately, he didn’t get to capture a state title; the Eagles lost 3-2 in the state semifinals to eventual Class 2A champion Grand Rapids in 2017.

“I think that’ll probably haunt me for a little while,” Casey Mittelstadt said. “But I guess the sun comes up the next day, and I’m happy where I’m at now.”

He scored 21 goals and 64 points in 25 games that senior season and was named Mr. Hockey. He finished out his senior season with the Eagles after starting the season in Green Bay with the USHL.

He said he would have regretted not coming back and playing with his friends at Eden Prairie. It was the right decision for him, and he’d do it again, Casey Mittelstadt said.

As a freshman with the Gophers last season, he scored 11 goals and 30 points in 34 games before getting the opportunity to sign a three-year, entry-level contract with Buffalo. He played six games at the end of last season, scoring his first NHL goal and a point in five of the games. 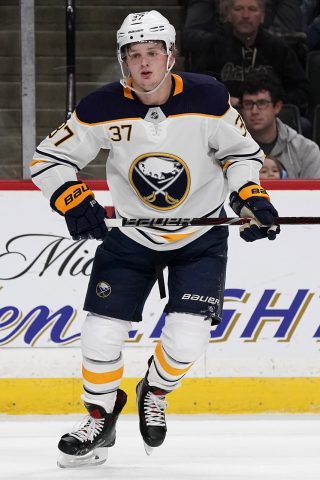 “If you would’ve asked me in high school if I would only play one year at the U, I probably would’ve thought you were crazy,” said Casey Mittelstadt, who added that the opportunity to join the NHL was too good to pass up. “I grew up watching the NHL and dreaming about being in it. I think it’s a matter of whether you think you’re ready or not, too. It’s a different decision for everyone, but for me, I felt like I was ready.”

Casey Mittelstadt, who turns 20 on Thanksgiving, has two goals and four assists for Buffalo this season, including a shootout winner on his first career attempt to seal a 4-3 victory over Vancouver on Nov. 10. He also had a goal and assist in a victory over Ottawa on Nov. 3. Lately, he’s centered a line with Conor Sheary and fellow Minnesotan Kyle Okposo, a player Mittelstadt said he’s leaned on for help.

Being a youngster in the NHL, it’s also weird for him to see his teammates with their kids and families, and he just finished high school a couple years ago, Casey Mittelstadt said. The travel lifestyle is a bit of a change, too. He remembers the first few plane rides and hotels when he joined the team, saying how nice the plane and hotels were. It makes you step back and realize how lucky you are, he said.

“I think just the whole thing overall kind of hits you at weird times,” Casey Mittelstadt said. “You kind of get a reality check.”

He’s also playing with guys he watched in Wild sweaters when he attended his five or six Wild games a season as a fan. That’s players like former Wild forward Jason Pominville, who recently played in his 1,000th career NHL game and scored the game-winner against the Wild.

Casey Mittelstadt isn’t the only NHL product from the hockey powerhouse in Eden Prairie. Along with Seeler, Nick Leddy, Kyle Rau and Mitch Rogge came from the Eagles program.

Smith, entering his 26th season behind the bench, was at the Wild game to see Casey Mittelstadt’s first NHL game in Minnesota. He recalled the big smiles on the faces of Casey Mittelstadt and Seeler when they were just young kids loving the game of hockey.

“A lot of kids love hockey, but they had that drive to be special all the way through that I think separates some kids from being really good to having a chance to accomplish something like that,” Smith said.

With his skillset as a forward, Casey Mittelstadt tops the list of Eagles players as far as his accomplishments so far, Smith said, adding that Rau – who led Eden Prairie to a pair of state titles and has played with the Wild – is right up there as well.

In his rookie season, Casey Mittelstadt’s working on improving the defensive side of his game, including faceoffs. He said he’s not too worried about his slow start offensively.

“I have pretty high expectations for myself,” Casey Mittelstadt said. “I’m pretty hard on myself. If I go in and play well and play the way that I think I can play, it usually works itself out.”