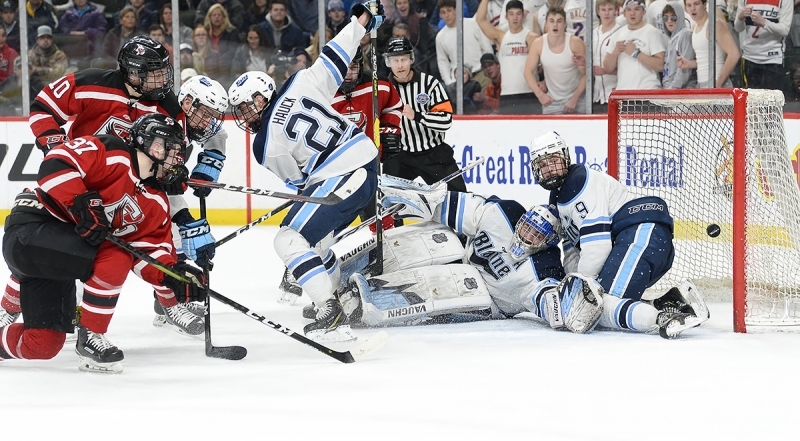 Eden Prairie’s Carson Jones scores what would turn out to be the game-winning goal in the Eagles’ 4-3 Class 2A state semifinal win over Blaine on Friday night at Xcel Energy Center. (Photo by Tim Kolehmainen – Breakdown Sports USA)

St. Paul — A little more than 24 hours after a triple overtime thriller against Lakeville South No. 3 Eden Prairie was rewarded with a semifinal meeting with a well-rested, hungry Blaine team with a formidable top line featuring Mr. Hockey finalist Bryce Brodzinski, Carsen Richels and Cole Hansen. When Hansen had the No. 2 Bengals up 2-0 less than 10 minutes in it had the look of a long night for the Eagles when they headed to the dressing room trailing by two.

Looks can be deceiving, however, as Eden Prairie exploded for four second-period goals — three of them on the power play — and withstood a late Blaine rally to advance to its first Class 2A championship game since the 2016 season.

“Actually I thought we played a really good period and we didn’t get rewarded at all for it,” Eden Prairie coach Lee Smith said. “So my biggest concern was just to make sure we’d have the energy and make sure they were ready to go because we were not out of this game yet and the guys, they responded together.”

Keegan Langfels ignited the comeback with a power-play goal at the 6:08 mark and the game was tied 25 seconds later on a goal by Smith’s son, Garrett, who had to get creative to score his fifth goal of the season face down at the right edge of the crease.

“I tapped it first and I knew it wasn’t going to get all the way in,” Garrett said. “I got a jab from the guy behind me so I kind of used that to my advantage and kind of used the shaft of my stick and maneuvered that in the net somehow.”

With Eden Prairie up 3-2 late in the period on a Luke Mittelstadt power-play goal, Brodzinski was called for cross-checking and it was the Eagles’ second power play unit which made the Bengals pay when Carson Jones scored his second of the year just 21 seconds later.

“We put our second power play out there, who are a bunch of tremendous hockey players, and they scored a goal,” Lee Smith said. “It was a great effort and made it 4-2 but we never really felt confident going into the third but we played a really good third period. For having to battle the way we did yesterday, we played so well tonight.”

Richels closed the gap to one at the 14:21 mark of the the third but Blaine had trouble establishing itself in the Eden Prairie zone after that. Richels added an assist and Brodzinski had primary assists on all three goals but the Bengals could not match Eden Prairie’s secondary scoring on a night when its top scorer, Jack Jensen, was held off the score sheet.

“We also got a couple of shifts out of our fourth line in the first period and they drew a penalty late in the period which helped us because it turned into a 5-on-3.”