Eagles fly past Blaine into semis 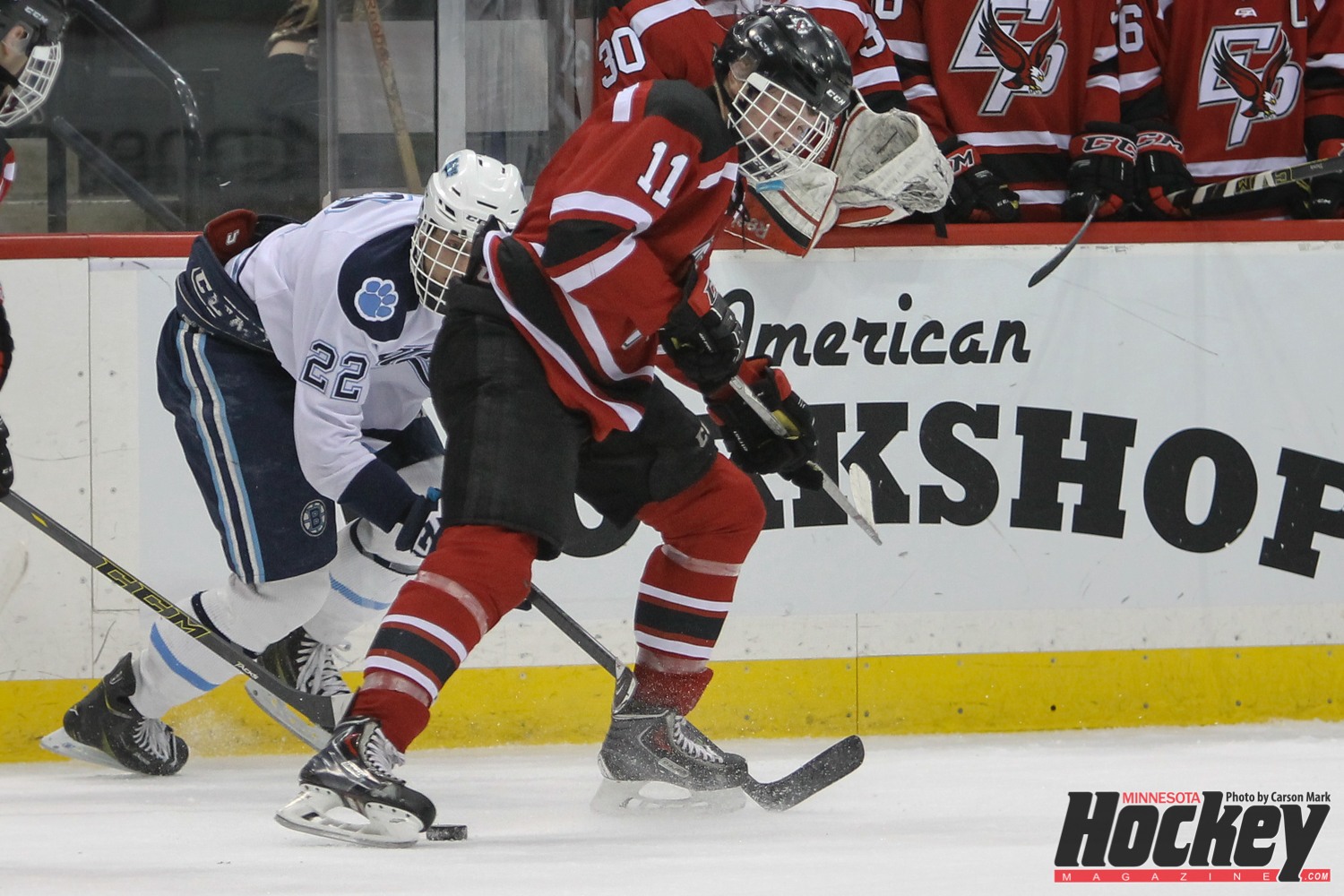 Eden Prairie sophomore Casey Mittelstadt made quite a splash in his state tournament debut, scoring two goals to help the Eagles to a 5-3 win over Blaine in Thursday’s Class 2A state quarterfinal at Xcel Energy Center. (MHM Photo / Carson Mark)

St. Paul — At this time last year, the name Casey Mittelstadt wasn’t known by the majority of those attending the boys’ state hockey tournament. While Eden Prairie made a state tournament appearance in 2014, Mittelstadt did not as he was still a bantam.

A year later, Mittelstadt is already making a name for himself at the Xcel Energy Center and the Blaine Bengals received their introduction on Thursday night.

The first-year varsity starter scored two of Eden Prairie’s first three goals to lead the Eagles to a 5-3 victory over the Bengals in the Class 2A boys’ state hockey tournament quarterfinals. The Eagles will face the No. 1 seeded Lakeville North Panthers — who outlasted Eden Prairie 5-4 in three overtimes last year — in the state semifinals.

In Middelstadt’s state tournament debut, he couldn’t have had a much better experience.

“It’s pretty much indescribable,” Middelstadt said of the state atmosphere. “It’s crazy out there. There’s so many people here and I grew up every year coming to it, skipping school, so it’s pretty special to be out there.”

While it was a surreal moment getting to play in a tournament he watched as a youth hockey player, the University of Minnesota commit had to make sure his nerves didn’t get the best of him. But when he lit the lamp for his first time in the state tournament, his nerves disappeared.

When a shot from Mittelstadt nailed the Blaine post with just under four minutes remaining in the first period, it foreshadowed his goal that came less than 30 seconds later as he redirected teammate Brady Schoo’s shot from the point, into the Bengal net. The sophomore forward would later score his 26th goal of the season with 10:10 left in the second period, giving Eden Prairie a 3-1 lead.

“Coming in, you’re pretty nervous,” Middelstadt said. “I was trying to calm the nerves down in warmups. It’s a big stage and I grew up coming every year. It was nice to get [a goal] early and settle into the game a little bit.”

A 3-1 deficit proved to be too much for a Bengal offense that struggled all night to put any pucks on the Eagle net. Through three periods, an Eden Prairie defense led by Nicky Leivermann held a potent Blaine offense that averages almost five goals per game, entering the tournament, to just three scores and 12 total shots on net.

As the Bengals continued to struggle to produce on offense, the Eagles continued to find even more success in their offensive zone. Their other leading scorer, Michael Graham, tallied two goals of his own with his second goal coming with 5:05 left in the second period.

The lead that Eden Prairie’s top two scorers provided proved to be enough to defeat the Blaine Bengals and Eagles head coach Lee Smith knows he’ll need similar production for his team to continue to win at the Xcel Energy Center this weekend.

“The only chance you have of winning a state tournament is your top guys playing big,” Smith said. “And our guys did tonight, and they’ll have to again tomorrow night.”