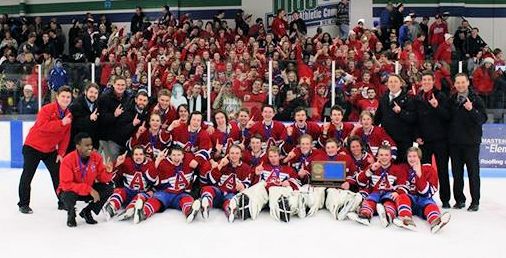 The Apollo Eagles celebrate their Section 6A championship. (Twitter photo)

ST. CLOUD – The Section 6A final’s location was moved down I-94 on Saturday night after both St. Cloud Apollo Eagles and St. Cloud Cathedral won their respective semifinal games. Rather than play it in Alexandria, the two teams would battle in an intercity section championship game at St. Cloud’s Municipal Athletic Complex in front of a standing room only crowd of more than 2,100 fans.

The St. Cloud Apollo Eagles scored three first-period goals and put on a solid defensive effort the rest of the game to earn a 4-2 victory over the defending Section 6A champions St. Cloud Cathedral Crusaders.

After taking an early lead just two minutes into regulation, the Eagles saw their 1-0 lead slip away with a power play goal from Logan Neu to tie the game up at the 7:28 mark of the opening frame. 10 seconds later, Gino Lucia reclaimed Apollo’s lead after sneaking the puck past Cathedral goaltender Zach Fritz.

“You always look to answer right away if you can, obviously, and in hockey there’s opportunities” St. Cloud Apollo coach Pete Matanich said. “But for Gino [Lucia] to come out on a 2-on-1 and make a good shot on Zach [Fritz] and catch him off guard off a little bit, it was exactly what we needed.”

Apollo increased their lead to 3-1 with just 51 seconds remaining in the first period, as freshman Noah Bissett netted a power play goal. It was the eventual game-winning goal, a goal which was hard-earned after Noah Bissett received medical attention twice during the game; once during the second period after taking an elbow to the head and another during the third period when he suffered a brutal open-ice check in front of the penalty box.

“For us it was exciting just to see him take step up in a big role over the course of the last three weeks for us” Matanich said of Bissett. “Obviously he takes a little bit of abuse for it too, but when you’re 5’ 4”, you’re gonna get beat up.”

Leo Lommel capitalized with a power play goal at the 12:41 mark of the second period to cut the lead in half. Lommel’s goal was part of a second period surge for the Crusaders, who more than doubled their shots on goal total from the first period with 10 in the second period alone.

Cathedral’s Zach Fritz played well in the final two periods of his high school career, stopping the remaining 12 shots he faced for total of 16 saves on 19 shots.

An uneventful third period turned eventful as the Crusaders pulled Fritz for the extra attacker. A few late Cathedral opportunities with the 6-on-5 man advantage were thwarted by Eagles goaltender Nick Althaus, who stopped 19 of 21 Crusader shots.

Jason Omann added an empty net goal with 23 seconds left to seal the Eagles’ 4-2 victory and second Section 6A championship in the last three years.