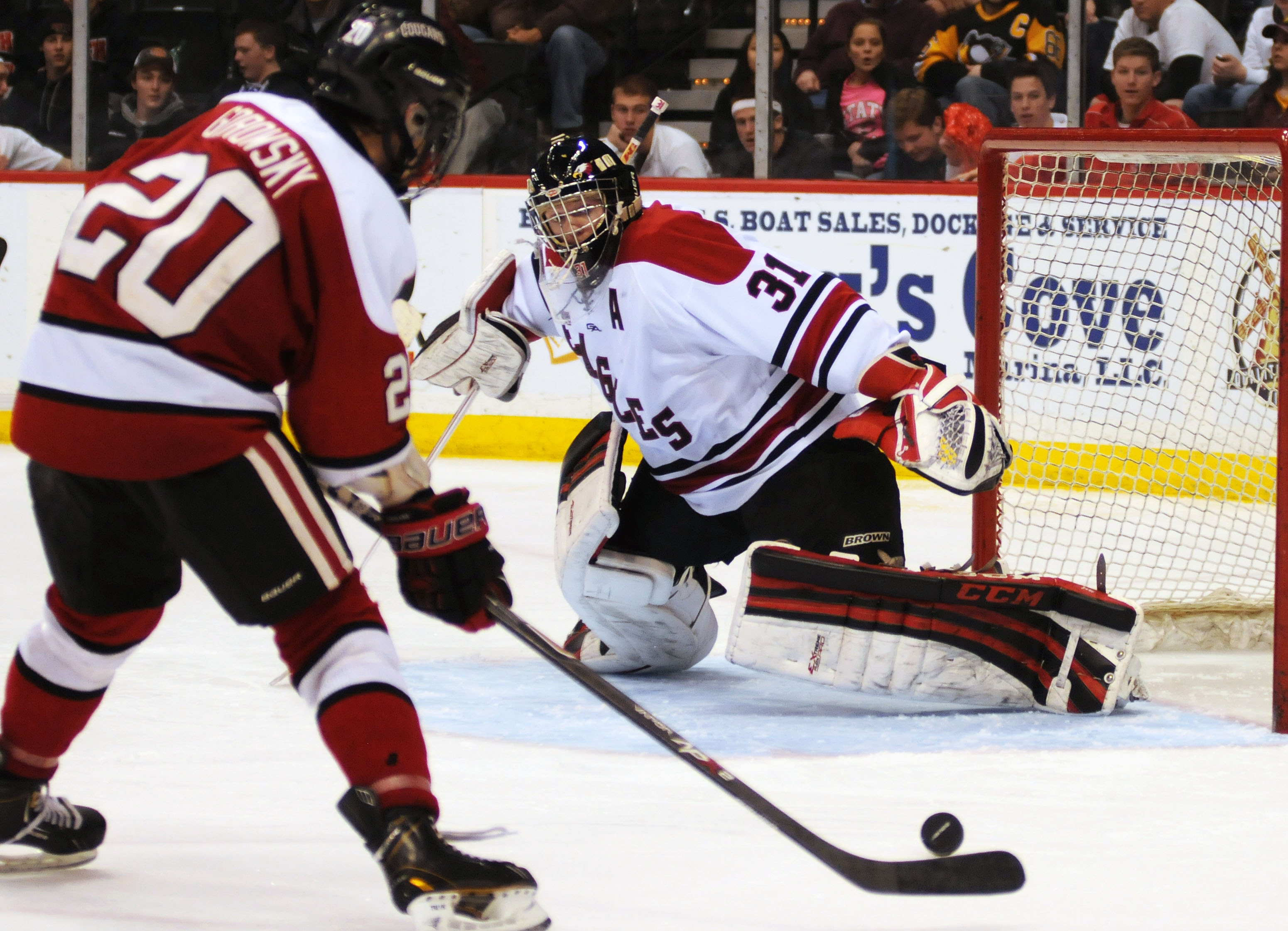 Jake Gerdes and his Eagles’ teammates survived a comeback bid by Ryner Gorowsky the Cougars to move on to the the Class AA semifinals. (MHM Photo / Jordan Doffing)

SAINT PAUL—If there’s a worse time to take a penalty than with just over two minutes left in regulation and down a goal the Centennial Cougars would like to know. Eden Prairie led 4-3 with 2:17 left in the third period when Adam Anderson was called for a tripping penalty.

“Obviously we’re not going to agree with it, but it is what it is,” Centennial coach Ritch Menne said of the penalty. “The officials are out there and they did a decent job. But even with that I don’t think our guys got down and that character was still there.”

The Cougars killed off the penalty but having to pull the goalie just to make the skaters even was just not enough to get something going and tie the game.

Centennial trailed 4-1 heading into the second period before they scored twice on goals by Anderson and Ryner Gorowsky to pull within one goal. But that was all the Cougars could muster en route to a 4-3 loss.

“I think that we stopped moving our feet and they got some confidence,” Eden Prairie coach Lee Smith said. “Their goalie started making some big saves and we started getting less traffic in front of the net.”

The game was mostly in control of the Eagles for the first period as they scored three goals within the first 8:38 of the game to take commanding 3-0 lead. Jack Sullivan scored the first two goals just 2:52 apart and Marc Sullivan gave the Eagles the three goal lead with a power-play.

“It was a rough go – not the way we wanted to start,” Menne said. “But we as a coaching staff knew they had it in them to make a comeback and we just wanted to remind them of that.”

It seemed as though Centennial was going to complete the comeback as they were in control for much of the second and third periods but some good goaltending by Jake Gerdes along with some help from the goal pipes prevented the Cougars from doing so.

“I think we got here so early and the way we came out it was so easy and then you get dealt some adversity and then you get reeling with the penalty kills and then they get confidence,” Smith said. “That’s what the state tournament is all about – it’s about games like this, not 4-1 victories. It’s about games that come down to the wire and our guys were strong enough mentally with our eleven seniors and the other guys jumped on board.”