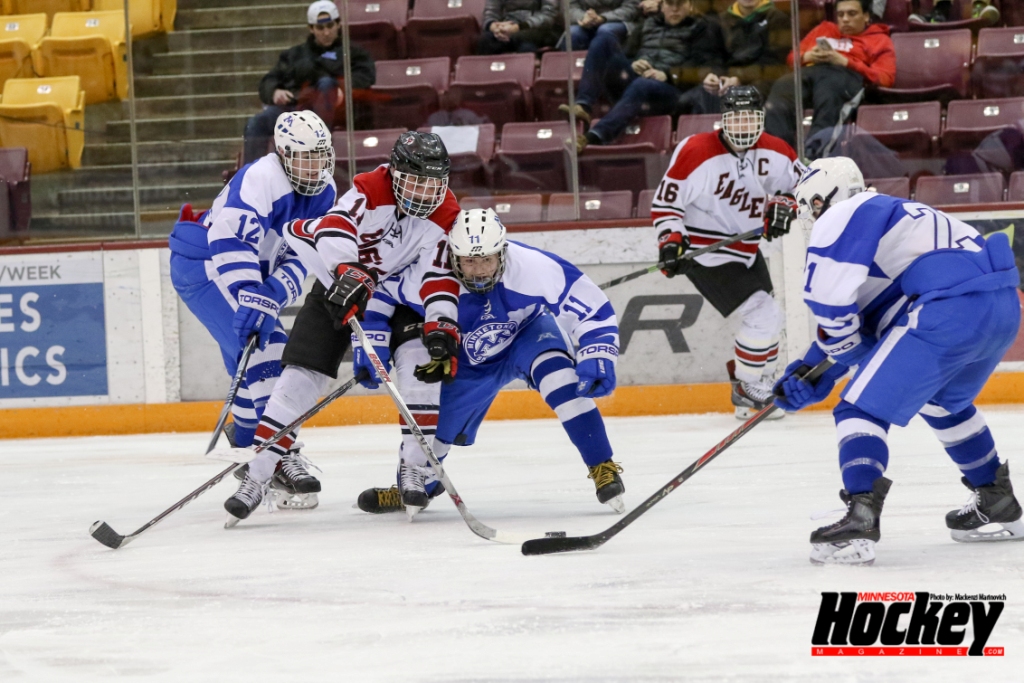 Eden Prairie’s Casey Mittelstadt fights his way through traffic on his way to scoring twice, including the overtime winner, in the Eagles’ 2-1 Section 6AA final win over Minnetonka on Wednesday night at Mariucci Arena. (MHM Photo / Mackenzi Marinovich)

MINNEAPOLIS – Playing without three key players who were suspended for the Section 6AA Final did not deter the Eden Prairie Eagles for capturing a 2-1 overtime win over the Minnetonka Skippers in the Section 6AA final from Mariucci Arena on Wednesday night.  The win marks the first time a team has won back-to-back Section 6AA titles in 15 years and the Eagles were challenged to make it happen with a bench that would be missing two seniors and a junior.  It challenged the Eagles who were facing a Skipper team with plenty of depth.

Sophomore phenom and University of Minnesota recruit Casey Mittlestadt scored both his team’s goals to lift them to the state tournament, yet it was a game that experienced several peaks and valleys for each team and a number of momentum swings.

The Skippers effort mirrored their game in the section semifinal, a 3-2 win over Wayzata on Saturday.  It was another slow start out the gate in the first period for the Skippers yet the club was held in the game early by senior goaltender Jacob Berger who was able to hold serve until a terrific effort by The Eagles Mittlestadt.  The game’s first goal came off a rush up the right side of the ice by Mittlestadt who was his elusive self and cut back to the midde and beat Skipper goalie Jacob Berger to the five hole for the 1-0 lead at 8:24 for the first period.

After absorbing a crushing blow off the end boards, Minnetonka senior Gavin Payne was able to get the puck to Maxwell Cavanaugh who found Dominic Picciano with a pass from the end boards that led to a tap in goal and a 1-1 tie in the second period.  The Eagles could only muster 3 shots on goal for the second period and were limited in quality scoring chances.

One had the feeling as the game wore on, the confidence of the Skippers  was increasing while the Eagles were being taxed witout their top players in the lineup.  Certainly, it was not an excuse, but the reality of a team dealing with a major blow to their depth.

The Skippers picked up where they left off generating a number of scoring chances.  Goalie Shaun Durocher, who was on the Minnetonka roster as a JV player last year, made back-to-back saves including and impressive left pad save from the butterfly thwarting a potential Skipper go ahead goal.

Eden Prairie found its game in the third period, which yeidled puck possession and eventual scoring chances.  The game grew in intensity as the third period wore on with Mittlestadt and Michael Graham,  a pair of Division I recruits hooking up only to have Berger flair the right pillow and turn aside a glorious opportinity witin the final 20 seconds.  Quickly, as play went on, the Skippers countered with a two-on-one chance as the click was winding to zero.  Durocher fired his catch glove at a puck swatting the puck aside.

The Eagles took over in the overtime session and cahsed in on a feed to Mittlestadt from behind the net by Nolan Sullivan.  “I think it is a huge rink,” Mittlestadt said when asked about both teams having their moments in the game.  “Everybody was tired, both sides were tired.  Momentum swung a lot and we tried to get that one chance and bury it.  Berger is a great goalie so you have to find that one chance.”

Smith was quick to credit the Skippers who delivered on their game plan and were a bounce away from a trip to the state tournament.  “I’d like to give Minnetonka credit for what a great game that was,” Smith said.  “That was one unreal hockey game as the other one was and it’s too bad a team has to go home losing after playing that hard but we have been in that position before.  They came at us and juggled some things from Saturday that made things even tougher for us.  What Brian (Urick) did was really good.”

Acknowleging that the three players that were not in the lineup Marc Sullivan, Riley Argetsinger, and Louie Roehl all missing for being involved in a fighting dust up in the closing seconds of their semi-final win over Benilde-St. Margaret’s Smith said his team had to address that they were not there but had to move forward as well.

“I am really proud of our kids for rallying.  We really missed those three guys a lot just because of some line changes and they (Minnetonka) have good depth and the adjustments that he made coming into this game, putting a guy that can score on each line made it difficult for us and somehow we found a way to persevere.”

Video of the Eagles and Red Knights dance quickly blossomed on the social network scene and was picked up by a number of high end news organizations.  There was a lot of attention paid to the turn of events and subsequent suspensions.  Smith had a plan with how to deal with it and it allowed his club to put their best foot forward.

“We had a meeting when we got back that night and we talked about this is blowing up on the social media and I am going to give you until Sunday night to watch it and then after that, you have to stay away from it,” Smith explained.  “Then, you’ve got to focus on playing a hockey game.  You are not bad kids, you are not a bad team.  It’s an unfortunate situation but we’ve got to rally and find a way to get it done.”

Rally they did in a tough situation.  Adding to the dimension of that was how difficult it is to win the Section 6AA in back-to-back years.  According to Smith, Edina was the last team in the Section 6AA to win back-to-back titels.  It was a goal the Eagles looked to accomplish coming into the season yet with the loss of 13 seniors including Division I recruits Luc Snuggerud and Steven Spinner, the Eagles had plenty of holes to fill.  Smith credited his coaching staff and the players for their accomplishing their goal and was quick to hand out praise among his team.

“It all started with great leadership,” Smith said outside his energetic locker room.   “Andy (Aguilar), Brady (Schoo), and Michael (Graham) are all three great captains.  We knew we had a lot of work to do and the first thing was to find our goalie.  Our goalie coach Matt Bertram worked those guys so hard and we found Shaun Derocher.  He stood in there and gave us a chance.  From there, the rest of the guys fell into place.  We had some JV guys that moved up and were great players down there.  They had to wait their turn and they stepped up and played well.  The sophomores that stepped in were all stars and great players off the bantam team. The combination of the remaining guys and the new players was a good recipe.  There are no guantees in Section 6AA.”