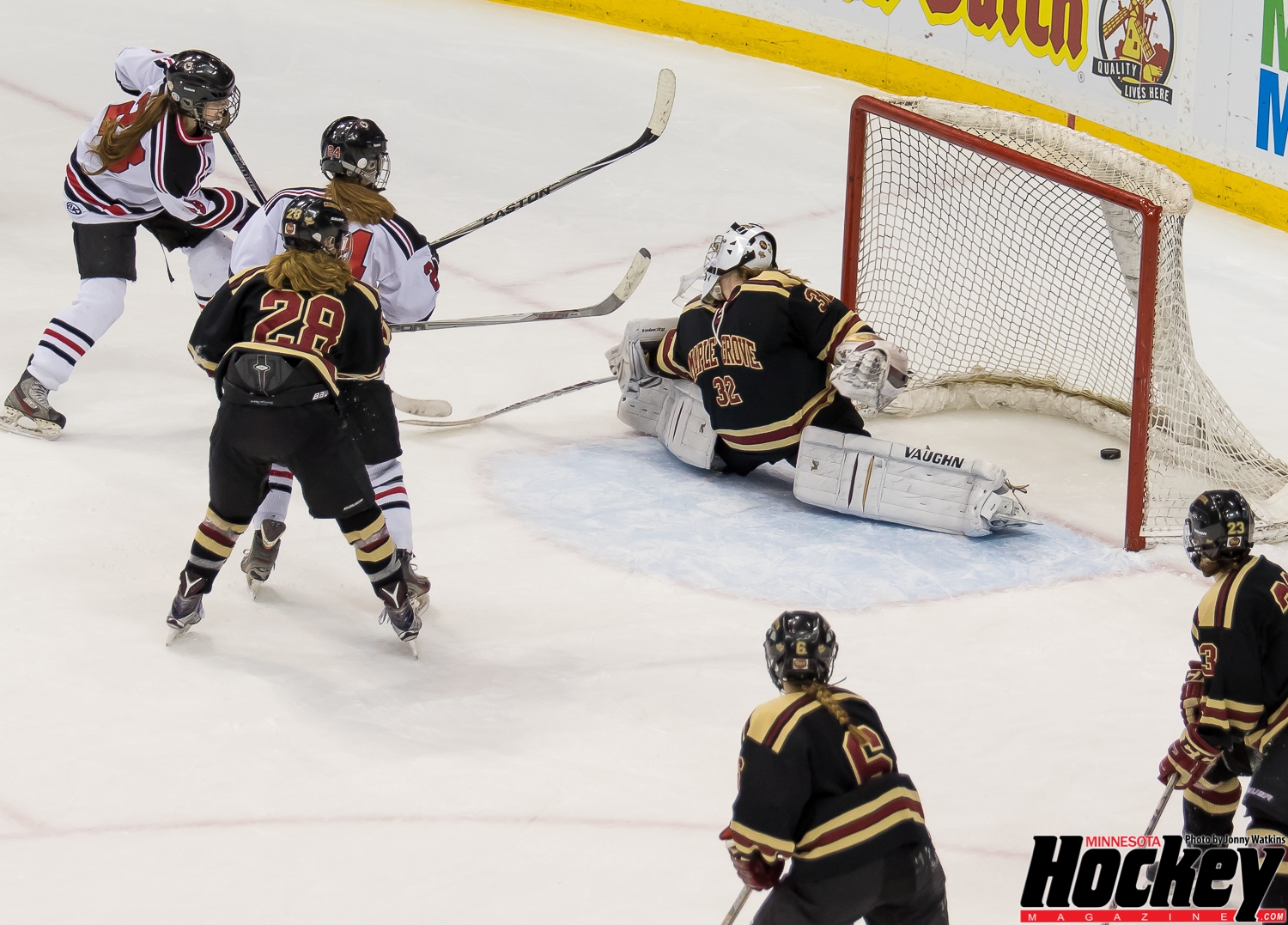 Lauren Oberle (far left) watches her shot hit the back of the net for the overtime winner in Eden Prairie’s 3-2 Class 2A title game win over Maple Grove on Saturday night at Xcel Energy Center. (MHM Photo / Jonny Watkins)

Lauren Oberle could not have picked a better time to score her first goal of the state tournament.

After Eden Prairie gained a two-man advantage with 3:18 left in overtime, Oberle snuck the puck past Maple Grove goaltender Breanna Blesi, propelling the Eagles to a 3-2 state championship victory over the Crimson.

Maple Grove had momentum through the third period and into overtime, which included a puck that hit the left pipe in overtime. Thus, the Eagles knew their best opportunity to win was the 5-on-3. They didn’t want to waste it.

“This is a smart group,” Grossman said. “When we teach them stuff, they pick it up pretty quickly and they execute it the way we ask them to execute it.”

The group was also smart enough not to get down after Maple Grove scored two-third period goals in 80 seconds to tie the game at 2-2 with 10:27 left in regulation.

The way the game was finishing in the third period, it seemed Eden Prairie would walk away with the victory. But, the Crimson had other plans.

The four goals scored in regulation was surprising considering the level of goaltending both net minders displayed in the state semifinals.

Both Blesi and Eagles’ goaltender Alexa Dobchuk shut out their opponents on Friday night, and the goaltending battle on Saturday lived up to its billing in the first period.

Blesi picked up right where she left off on Friday when she made 43 saves in a shut out Hill Murray. She stopped 10 shots in the first period, but her most impressive first period moment was when she denied two consecutive shots when Eden Prairie had a 2-on-1 during a Crimson power play. Blesi never lost composure, keeping her team right in the close game. She finished with 41 saves.

Alexa Dobchuk, who stopped 28 shots in the victory, came out just as strong as Blesi, showing no signs of nerves despite the stage.

“When you know it is going to be a tight game, you have to have faith in the Lauren Oberle’s of the team that they are going to get a goal for you,” Dobchuk said.

Anna Gravelle and Rachel Werden scored the two second period goals for the Eagles, which set up Oberle’s overtime winner.

Eden Prairie doesn’t have any Ms. Hockey finalist, and many of its players won’t likely win individual accolades. Yet, here the Eagles stand with a state championship trophy.

The key to their success: the players bought into playing team hockey.

“We think some of our kids get underrated because we play a team game,” Grossman said. “There are some teams that let their kids take over games and play individual, but we ask our kids to play disciplined, system hockey.”