Jack Keeley’s shortie in overtime vaults Eden Praire over Benilde-St. Margaret’s
in 6AA final and into the state tournament. 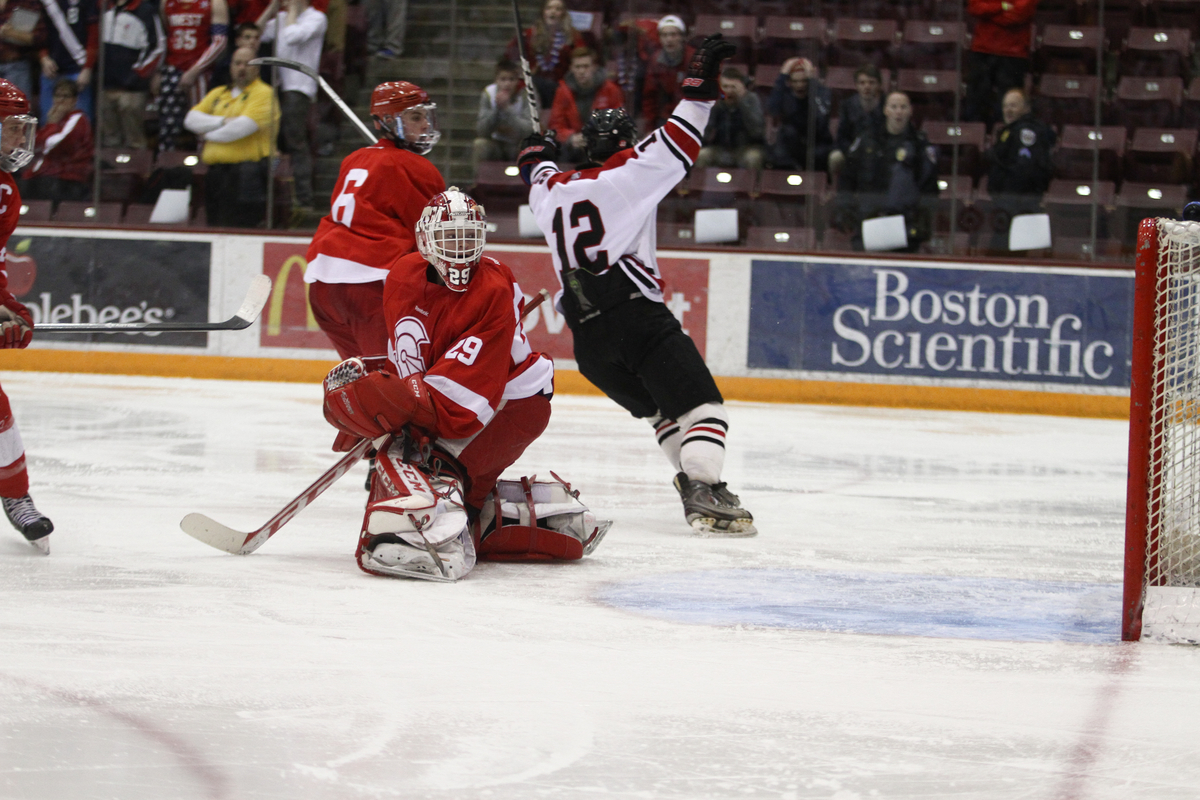 Eden Prairie’s Jack Keeley reacts after scoring the winning goal in overtime to defeat Benilde-St. Margaret’s 3-2 in the Section 6AA final and send the Eagles back to the state tournament. (Photo / Ryan Coleman, d3photography.com)

Rarely do teams meet three times in a high school hockey season and four meetings is all but unheard of.  The Benilde-St. Margaret’s (BSM) Red Knights and Eden Prairie Eagles met for the fourth and final time this year in the Section 6AA Finals and Eden Prairie earned a hard fought 3-2 double overtime win over the Red Knights propelling the Eagles to the Minnesota State High School Hockey Tournament and  a 3-1 season record against BSM.

Not surprising, the top players were peppered on the score sheet and helped figure in the final outcome.  Spinner and Snuggerud hooked up early in the first period for the 1-0 Eagle lead.  Snuggerud sprung Spinner  on a short breakaway and made a quick handed move to freeze Red Knight goalie Jalen Long and deposit the puck through the five-hole for the 1-0 lead at 2:55.  The goal was Spinner’s 20th of the season.

The game saw a number of momentum changes and the first period closed with the shots on goal deadlocked as seven apiece yet the Eagles had the 1-0 lead.  The Red Knights responded with a pair of second period goals, the first coming at 2:57 of the second period.

Naas supported the puck up the right wing wall on an Eagle clearing attempt and handled it toward the Eden Prairie net.  He scooted behind the Eagle defense and out-waited goalie Jake Gerdes to deposit the puck in the open net to even the score at a goal apiece.  The goal was the 31st of the season for Naas.  Ben Newhouse assisted on the goal that sparked the Red Knight second period.

The Red Knights (15-9-3) took the 2-1 lead at 14:03 off a stifling forecheck by Nate Meyer.  He forced a turnover and found a trolling Will Duda who blasted his second goal of the season  from theta low slot area past Gerdes for the 2-1 lead heading into the third period.  The assist was the second of the game for Meyer.

The Eagles Colton Schmidt, back in the line up for the section playoffs, missed games from January 11th through February 19th that totaled 11 games.  Schmidt’s presence has been felt during the post season and he tied the game at 2:49 of the third period on the power play on a set up from Spinner.  Schmidt has (2g-3a-5pts) in his last three games back in the lineup, all playoff games.

The first eight minute overtime session yielded little in offensive chances and  just a 2-0 shots on goal advantage for the Eagles.  Early in the second overtime, The Eagles (17-8-3) were whistled for a penalty, putting the game in the hands of the potent Red Knight power play.  A blocked shot by the Eagles forced a turnover and Jack Keely raced up the ice and fired the puck over Long for the game winner marker early in the second overtime.

The Eagles victory was their third of the season against the Red Knights and the second that needed overtime.  It is the seventh time the Eagles have earned a trip to the state tournament with the last coming in 2011 which was Kyle Rau’s senior season that yielded the dramatic overtime goal.  Eden Prairie is in search of their third state title.

The Red Knights delivered a memorable performance during the Section 6AA Final and none was more touching than the embrace at center ice between Spinner and Naas, great friends with a high respect of not only each other but the game.