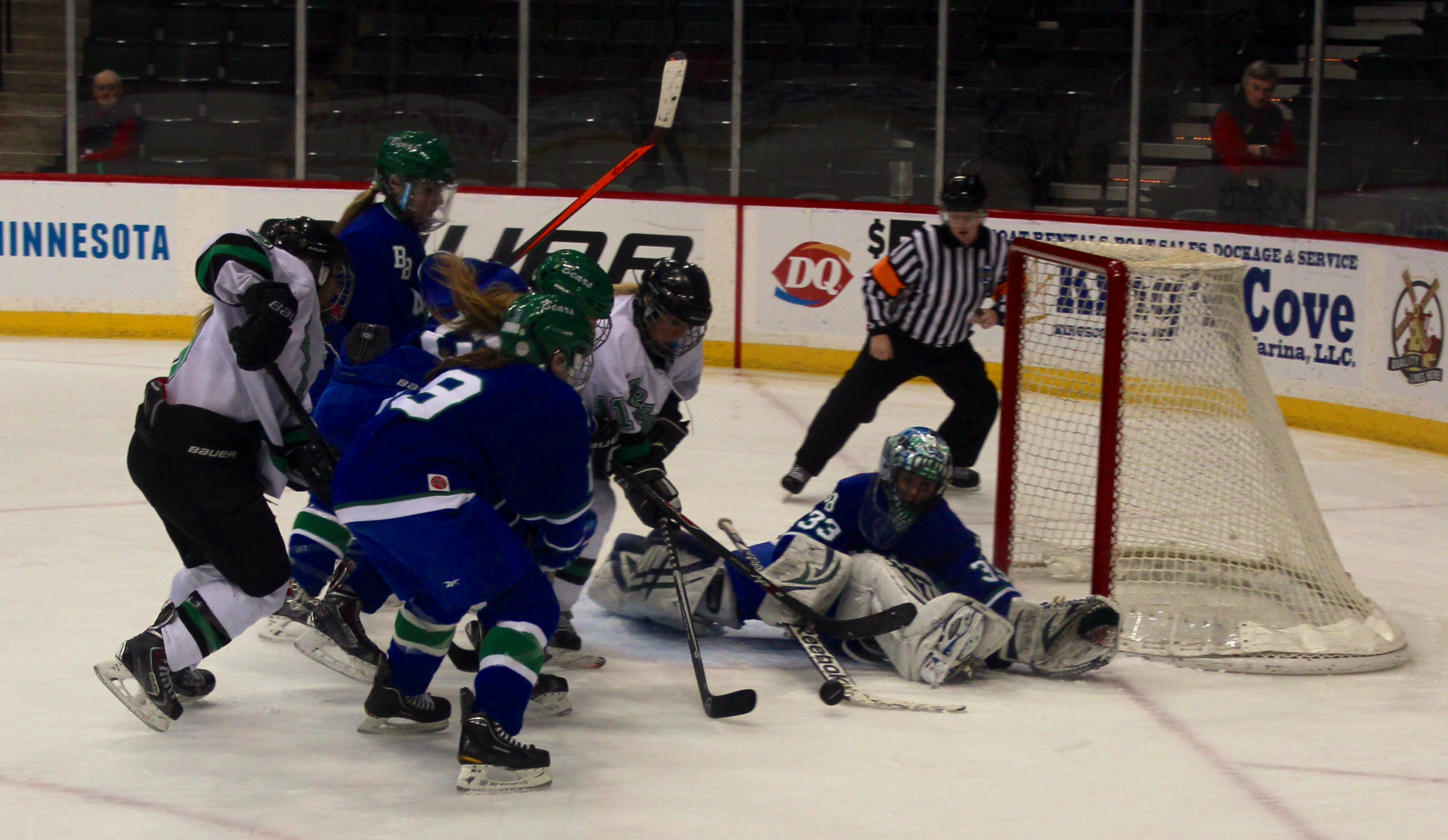 The battle for the 2014 Class A title didn’t disappoint, with drama building, and neither team wanting to be denied.   The Blake Bears valiantly trying to defend their 2013 state title against the top seeded first time qualifier East Grand Forks Green Wave saw both teams get the momentum, but could not maintain, leading to an entertaining up and down the ice game.   East Grand Forks started out quickly, jumping out to a quick two goal lead, the tension mounted, with Blake cutting the lead in half midway through the second period.

Coach Shawn Reid said the momentum changed in the second period, “A big part of the shift was  moving Sylvie Wallin up to forward, as we saw this generate some offense with Carly nearly scoring”.  They would soon be rewarded by the change as Sophomore phenom Carly Bullock  would notch her 5oth goal of the year.  The tension of the game mounted and with just under 3 minutes to go in the second period, Haley Mack went in all alone, with the puck not being quite settled was able to get a decent shot off, only to be stopped by a sprawling Anna Kruesel.

Blake nearly tied the game three minutes into the third period as Sylvie Wallin used her speed to go in alone on Madi Galstad, breaking around the defender with Galstad coming up with the stop.  Blake would be given an opportunity as a questionable tripping call on Haley Mack would give them a power play that would yield the tying goal.   Wallin’s shot from the top of the circle would bound off Galstad  and find it’s way into the back of the net.   Wallin would add another and get  the go ahead goal at the 10:56 mark on a scramble out front knocking in a rebound from 10 feet out.

Both teams had scoring chances with power play opportunities and traded scoring chances with the goalies coming up large.   With the goalie pulled, Wallin nearly iced the game, shooting from 150 feet and her shot glancing off the outside of the net causing an icing.  Blake would then call a time out setting up a frantic 50 seconds with both teams having opportunities.  With ten seconds left, the Green Wave nearly tied the game as Haley Mack’s shot from 15 feet out just glanced off Kruesel.The Wave out shot the Bears 31 to 24 but ended on the short end as Blake successfully defended their State Championship, winning for the 5th time in five tries.  Kruessel, when asked how does it feel being a state champion “It’s a really good feeling, just awesome”.

Reid was obviously pleased with the results saying “Internally this was not unexpected, we set out with lofty goals from the first day at the start of the season. and this is what we set out for”.  He later said ” Our players worked all season long believing this could happen”.

For the first time entrants Green Wave, coach Scanlan felt the key was “We had plenty of opportunities to get that third goal in the first period and if we had done sow, I think the outcome would have been different.   We tried to add to our lead, but their goalie came up with some big stops”.

When asked what he told his girls after the game, Scanlan said ” I told them  I am very proud of these young ladies, how they represented our school and community.  They are a championship team, and championship teams walk together forever. I told them you didn’t lose the game, we played to win,that’s what we focus on, we play to win,  but Blake made one more play than we did”.   Scanlan later reiterated how the team from the first practice on was locked in and ready to go  “It was a joy for me to coach this club”.

Nicole Schammel scored twice as the Red Wing Wingers jumped out to a 4-0 lead before cruising to a 5 to 2 victory over St. Paul United on Saturday morning, capturing the third place game.  United fought hard, but could not overcome the experience of Red Wing, with the Wingers repeating it’s third place performance from last year by defeating the first time entrant.  In last years tournament, the Wingers were defeated by the Blake Bears, who then went on to win the 2013 tournament.