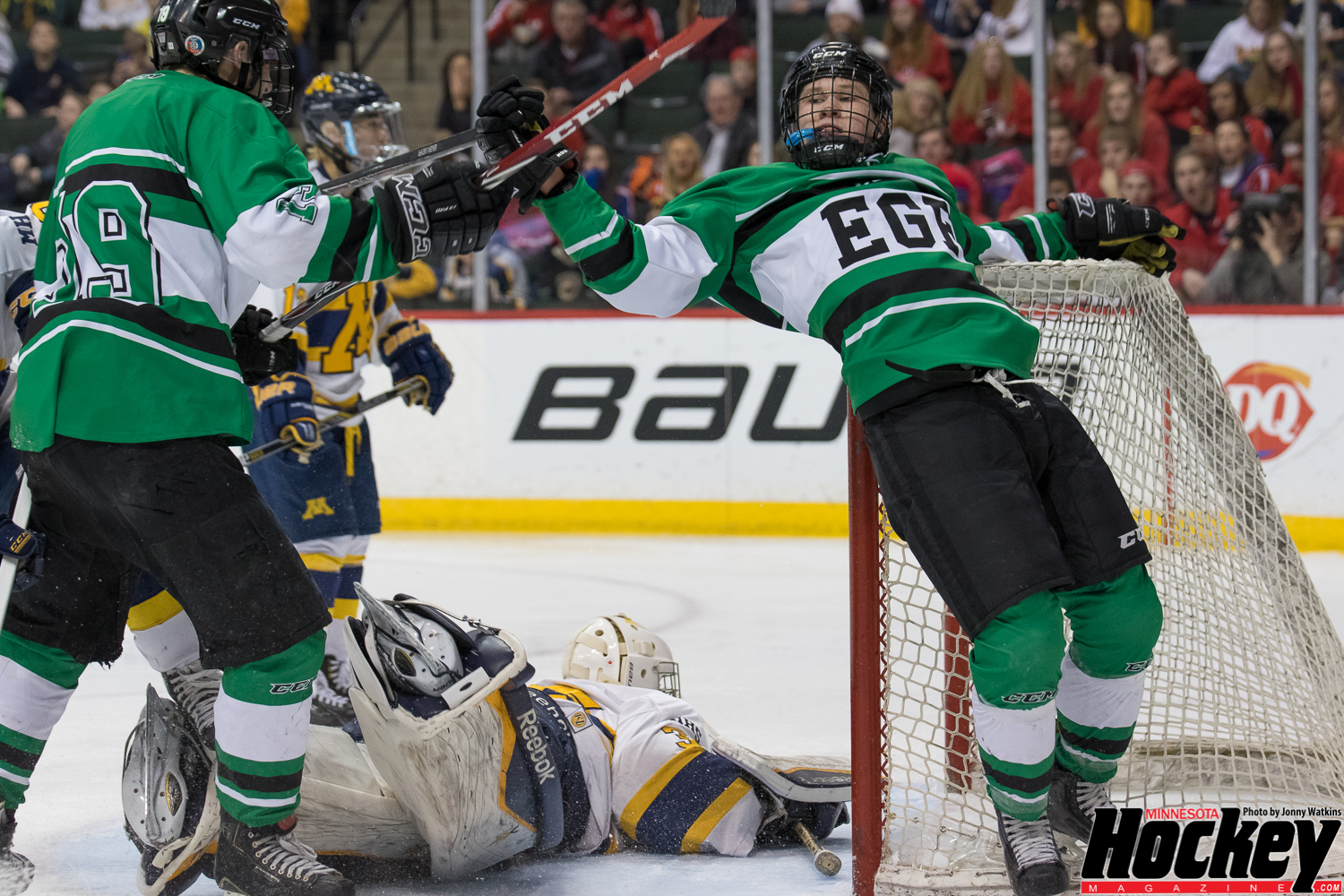 East Grand Forks’ Grant Loven crashes into the net after scoring one of his three goals in the Green Wave’s 5-2 Class 1A semifinal win over Mahtomedi on Friday afternoon at Xcel Energy Center. (MHM Photo / Jonathan Watkins)

St. Paul — To be a two-time defending section champion going for a second consecutive state title puts a gigantic target on a team’s back, according to East Grand Forks Coach Tyler Palmiscno, who added that his Green Wave (25-4-0) have worked hard all year.

No. 3-seed East Grand Forks used its physical play and a hat trick from junior Grant Loven on the way to a 5-2 win over No. 2-seeded Mahtomedi (25-3-2) in the Class 1A semifinals Friday at the Xcel Energy Center.

The Green Wave will look for one more win Saturday in order to capture a second consecutive state title.

Loven, who came into the game with 11 goals on the season, had his hat trick by the second intermission. His first tally came on a 2-on-1 when he shot the puck past the blocker of Mahtomedi goaltender Will Swanson.

His second goal was a second-effort shot off his own rebound as he crashed the net. With 3:06 left on the clock in the second, hats came over the boards from the Green Wave faithful as Loven put his team ahead with the eventual game winner.

Going into the locker room up 3-2 was a huge deal for his team, Palmiscno said.

Mahtomedi came back to tie it twice on goals from Joe Forciea and Timothy Kuivinen. The Zephyrs registered 20 shots on goal. The play was physical from the start, with multiple scrums and a couple coincidental minor penalties.

“I think it was effective in that it took us off our game a little bit,” said Mahtomedi Coach Jeff Poeschl. “They were very physical. When you play a physical game, it’s a very exhausting game. I don’t think they intimidated us, but I think they wore us down, physically.”

But it was junior Trevor Selk’s goal early in the third that sealed the game and another trip to the title game for East Grand Forks. It was just his second goal of the season. He was out for about six weeks with an injury and was medically cleared to play yesterday morning, according to Palmiscno.

Selk said afterward that he was going to help his team either way. The help came in the form of a goal, which he credited his teammate Dixon Bowen for a good screen.

“It felt great putting the puck in the back of the net,” Selk said. “Six weeks is a long time not to play.”

Hat trick aside, Loven said that Selk’s goal was the one to really set East Grand Forks apart. Still, Palmiscno said Loven has been good for the past six weeks, filling in at different positions with Trevor’s void.

The quality of the game on the ice seemed to match the atmosphere at the X. The lower bowl was packed with fans, and the upper level seats opened up not long after puck drop.

Palmiscno asked Poeschl the size of his community. Poeschel told him 7,500.

“I said, ‘I think they’re all here,’” Palm said. “Their student section was huge.”

‘’For decades, this is the premiere tournament,” he said. “I think single A has grown in its strength.”