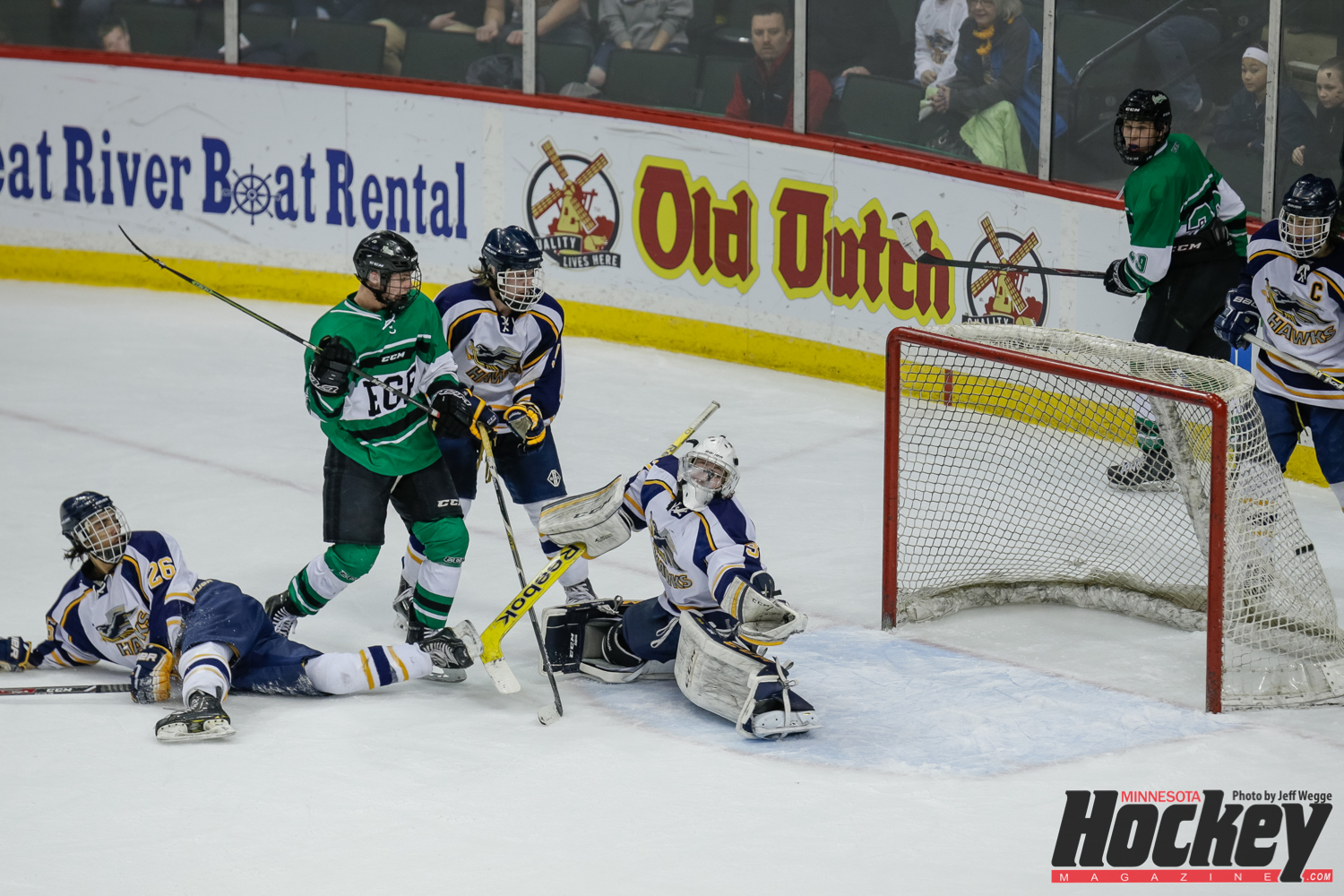 Player from both teams look on as Tanner Tweten’s overtime shot for East Grand Forks hits the back of the net to give the Green Wave a 5-4 win over Hermantown in overtime and a second straight Class 1A title. (MHM Photo / Jeff Wegge)

St. Paul — Eden Prairie coach Lee Smith, who has guided the Eagles to two state titles in his tenure, said after his team’s quarterfinal win over Blaine on Thursday night, “The only chance you have of winning a state tournament is your top guys playing big.”

Grant Loven’s pass from behind the Hermantown net found Tweten streaking through the slot and the junior’s one-timer went in, much to the delight of the legions of East Grand Forks fans on hand.

East Grand Forks’ top line of Tweten, Loven, and Dixon Bowen combined for three goals and six assists giving the Green Wave more than a chance to finish on top.

“I always knew we had it in us,” Bowen said. “All year long we played our systems and we did it the best today against Hermantown and ended up winning. It’s very special.”

The runner-up finish for Hermantown (27-3-1) is its sixth straight, matching its number of consecutive title game appearances. The difficulty of the defeat was not lost on Hermantown’s opponent.

But the Hawks did not go down without a fight, staging a stunning come comeback in the final 33 seconds to force the extra session.

Wyatt Aamodt  and Eric Gotz scored 17 seconds apart in the game’s waning moments with Hermantown goaltender Luke Olson on the bench for an extra attacker. The momentum seemed firmly behind the Hawks at that point but Green Wave coach Tyler Palmascino quickly calmed his team in the brief intermission prior to overtime.

“All I said was ‘If I would have told you at 8 a.m. this morning that we’ll be 4-4 going into overtime, would you take it?’ and of course they would, you have a chance to win the game” Palmascino said. “We felt like we played a pretty damn good period for 16 minutes and they made some plays, give Hermantown credit, they made a couple plays there at the end and, you know, we made one more play than they did.”

The Hawks outshot the Green Wave 31-25 but never was able to grab a lead at any point in the contest.

“I thought we outplayed them at certain times of the game and had our chances and we didn’t capitalize when we did,” Hermantown coach Bruce Plante said.

Second line forward Austin Monda scored two goals of his own, including a huge third-period breakaway goal which, at the time, appeared to give the Green Wave the breathing room they needed.

With his team nursing a 3-2 lead with just over 10 minutes remaining in regulation, Monda picked off a pass in the high slot in his own zone and was off to the races. The senior went in alone on Hermantown Olson and roofed a backhand shot for his 12th of the year.

The goal took on added importance after Aamodt and Gotz’s late-game heroics.

The Hawks came out flying in the in the opening period, peppering Weber with 12 shots, but it was the Green Wave which carried a 2-0 lead into the first intermission.

Tanner Tweten opened the scoring at 4:26 poking in a loose puck Olson thought he had frozen to the left post but Tweten found an opening to pot his 20th of the year. Later in the period, Tweten’s backdoor feed from the left circle found Austin Monda all alone near the weak-side post for his second of the tournament and 11th of the year at 12:03.

Weber, meanwhile, did his part keeping Hermantown off the board in the game’s opening 17 minutes, making back-to-back stops on Hawks’ star Ryan Kero and later turning away a Pionk deflection with the Green Wave shorthanded.

“We had a lot of great chances, especially early,” Plante said. “We came out of that first period with nothing … so it made it tough fighting uphill the whole game.”

“Josh is one of the calmest goalies I’ve ever been around,” Palmascino said. “It’s amazing how when he’s in the eye of a storm he has the ability to stay calm in net. He’s now a goaltender that’s won two section titles and two state titles; I think that’s pretty rare.”

But Hermantown responded in lightning quick fashion to open the middle frame, scoring twice in 4:02 to draw even with East Grand Forks. Parker Hawk — the player with the most Hermantown name of all-time — got things going at 1:28, on a shot Weber probably wants back, and Pionk tied it just 2:34 later.

Pionk turned the corner on a defender in the right circle where his backhand pass through the slot intended for linemate Cole Koepke was blocked by Green Wave defenseman Trevor Selk. But the puck caromed off Selk right back to Pionk who caught Weber leaning away from the right post and buried his 35th goal of the season.

The Green Wave’s top unit struck again, though, at 10:14 of the second to carry 3-2 lead into the third.

Loven drove to the net from the left corner where Olson thwarted his stuff-in attempt but the puck ricocheted through the crease to an awaiting Dixon Bowen who scored his third of the tourney and 22nd on the season.