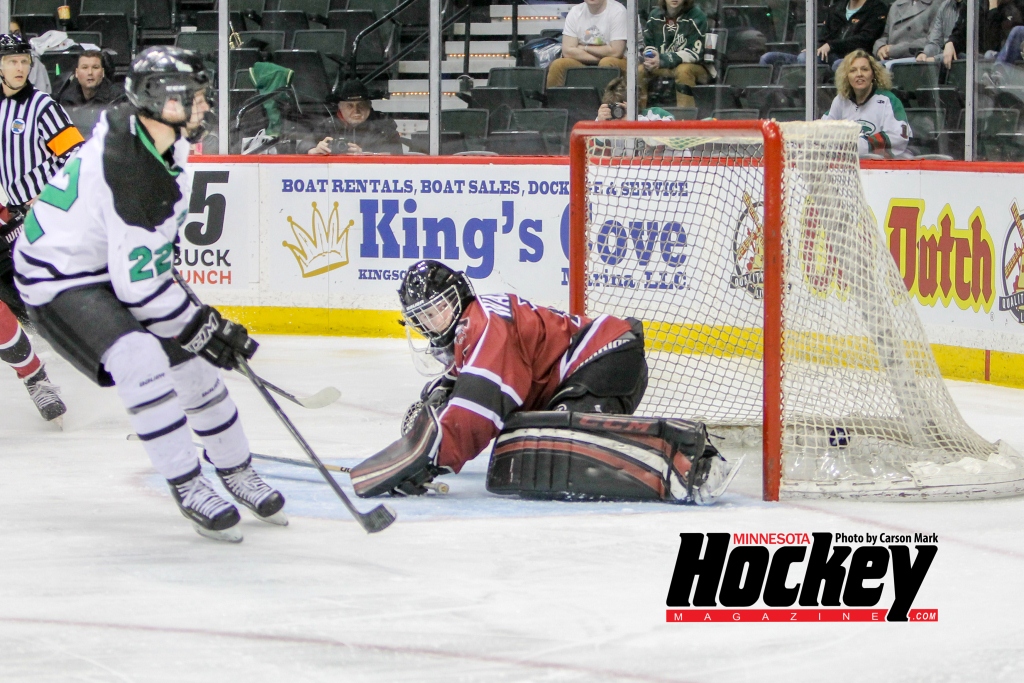 East Grand Forks got one win under its belt with a 4-0 victory in the Class 1A quarterfinals Wednesday against New Prague at the Xcel Energy Center.

“Our goal was to win a hockey game,” Coach Tyler Palmiscno said.

The No. 3-seeded Green Wave from East Grand Forks (24-4-0) are in the hunt for their second consecutive state title. This marks the third year in a row they’ve been to the state tournament. Even with the experience, the first game of the tournament is always tough, Palmiscno said, “just because it’s still new.”

“You still have that nervous energy,” he said.

As a defending state champ, East Grand Forks senior goaltender Josh Weber acknowledged the nerve-wracking excitement is still there this time around.

“We’re here to try to win another one,” Weber said.

The scoring didn’t get started until the second when senior Dixon Bowen got his team a 1-0 lead with his 26th goal of the season. He got a pass, skated through the neutral zone and to the net, putting the puck upstairs.

Bowen led his team with 11 of the 32 shots on goal, with of those coming in the first period. The Green Wave outshot the Trojans 32-17.

“I was just happy getting chances,” Bowen said.

New Prague came oh-so-close to tying the game just before the second intermission, ringing a shot off the iron.

East Grand Forks senior Cooper Jerome has two goals this season. One of them gave his team a 2-0 cushion early in the third period. A bouncing rebound came out front, then junior Braden Shea’s follow-up shot just snuck through the pads of New Prague senior goalie Conner Wagner.

As the puck trickled behind, Jerome spotted it and poked in past the line. The Green Wave coach called it a “huge goal” from his third line.

The Green Wave sealed the deal on the power play late in the third period. Sophomore Nick Derrick perched himself in front of the crease and was there for the deflection off junior Grant Loven’s shot from the circle.

Down 3-0, New Prague left the net empty for the final 1:43 of the game. East Grand Forks players missed on a few opportunities, but Bowen finally scored with 36.6 seconds left.

Wagner helped keep his team in the game with the scoreless first period and early second. He made 28 total saves. He also said the game was closer than the score.

“I had confidence in the team,” he said. “You’re just loving the game and having fun.

His coach, Chris Lonke, talked about momentum swings during the game. He said his players worked hard, and he thought the zone time with their opponent was even at times.

“You just have to take momentum or get it back,” he said. “Just wasn’t mean to be today.”