Championship road had its dips but win over Hill-Murray has Hornets where they thought they should be. 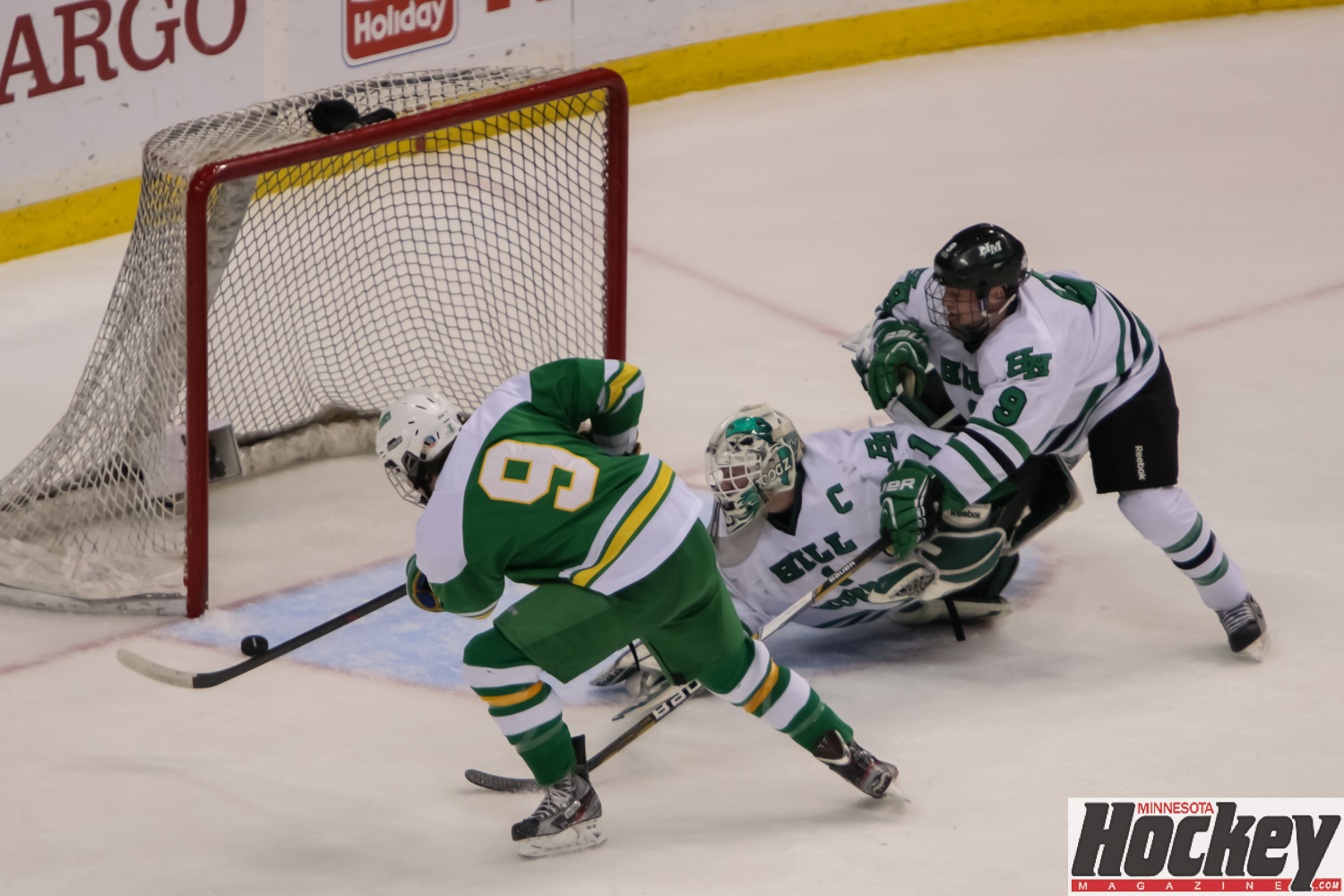 Expectations are high for the Edina high school hockey program. So high, in fact, the bar is permanently set at the top. Double-digit state titles have a way of doing that.

Over as three-day span, the Hornets relied on great goaltending, stingy defense and a speedy, tenacious group of sizeable forwards to chip away at their opponents both physically and mentally and roll to an 11th Minnesota State High School Class 2A Hockey championship at Xcel Energy Center on Saturday night with a 4-2 victory over Hill-Murray.

In the process, Edina returned a favor to the Pioneers who shut out the Hornets 3-0 in the 2008 title game. Hill-Murray was seeking its fourth championship.

“This is what we’ve battled for since the beginning of the year,” Edina assistant coach Dave Langevin said after Friday night’s win over Duluth East, providing a glimpse into Edina’s mindset in the fall. “First day of training camp, we said this was the first day for the state tournament. This is preparing from day one to get to this point.”

The Pioneers jumped to an early lead on Josh French’s goal just 4:11 into the game but Cullen Munson scored twice for Edina, including the game winner at 2:11 of the second period, while fellow Hornets Reno Parker and Bo Brauer each added a pair of assists.

Edina added an insurance goal on senior forward Anthony Walsh’s breakaway goal with 2:11 to go in the second, a tally which took on added importance when French scored his second of the night for Hill-Murray just 47 seconds later.

Edina goalie Willie Benjamin finished the night with 25 saves while John Dugas turned away 18 Hornets’ shots for the Pioneers.

Bumps on the road to St. Paul

Edina came flying out of the gate early in the season, reeling off nine straight wins to begin the campaign before losing two straight against Class 1A champion, St. Thomas Academy, and its semifinal opponent, Class 2A third-place winner Duluth East, in late December.

“[Duluth East] swatted us around at Christmas like we were bantams, I mean seriously, they embarrassed us,” Edina coach Curt Giles said. “We weren’t too comfortable with that; we didn’t like that too much.”

For those unaware, this is what’s known in Edina as a slump

But the Hornets never panicked. Despite experiencing what Giles termed as a few more “dips” in the schedule—losses to Hill-Murray, Minnetonka (twice), and Eden Prairie—the Hornets earned their 24th trip to the state tournament.

“We knew that we were in the middle of the season and this matters, but it doesn’t matter,”senior forward Anthony Walsh said. “What matters is what we’re going to do in March and that’s what we kept in our heads the entire season.”

“We have one of the hardest schedules in the state and it’s done like that for a reason, to get these guys prepared for situations like this,” Giles said. “We just wanted to go about our business and continue to grow. The whole idea for these kids is to get them to play the best as we possibly can at the right time of the year and these guys responded to that.”

Taking it to ’em

After its 9-3 win over Lakeville North in the quarterfinals, Edina came back from a third-period deficit to beat the Greyhounds, the team which “embarrassed” them just over two months earlier and set up a rematch with the Pioneers who also beat them earlier in the season.

Following that semifinal game, Duluth East coach Mike Randolph and his players conceded that Edina’s physicality, particularly from its forechecking forwards, was a huge factor especially late in the game.

Giles doesn’t feel his team is overly physical as far as taking runs a players and running over them. He says it is more about “outworking” people.

“Outwork people means separating people from the puck, eliminating,” Giles said. “We’re trying to get defensemen, when we forecheck, to stop and start as much as possible because that’s what’s going to wear you out.

“Hill-Murray had an excellent hockey team, they’re very high skilled, so we knew we had to try to wear them down as much as possible.”

According to Hill-Murray players, consider the Hornets successful in that regard.

“They have a lot of talent up front and they’re big guys and they’re fast. Their first two lines are some of the fastest players on the ice,” Pioneer senior forward and Minnesota Mr. Hockey candidate Zach LaValle said. “They wanted it right away in the beginning; it seemed like they came out a little bit harder than we did and they were winning battles and we weren’t. 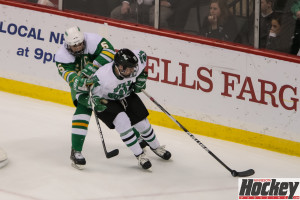 “They just kept coming at us harder and harder each forecheck,” Hill-Murray junior forward Willie Brown said. “They were relentless and they really wanted to win the game and they wanted that puck.

“So it just felt like they had a million guys on their bench coming at us hard.”

“They attacked us pretty aggressively,” Hill-Murray coach Bill Lechner said. “I believe we did adjust but they got up a goal or two there. I thought, at least, in that second period there, we were kind of taking momentum and getting the game taken over but we didn’t have results to show for it.

“Whether it be a day, a week, a month, the sun will come out and they will realize what they accomplished. I know we had three losses and we’ve also beat all those teams too. So we competed this year and, at the end of the day, our heads will be up.”

Walsh said the team’s success this season can be attributed to each player excelling in his role, whatever role that may be.

“Our [assistant] coach, Dave Langevin, has won four Stanley Cups with the [New York] Islanders, all in a row, and what he would always say is every team he was on, every man did their part,” Walsh said. “I think, on this team, everybody knew their role and everybody executed it perfectly.”

Asked to put a label on this year’s team Giles only had this to say about his team, but it speaks volumes.

“One thing I say about this group of kids is they listen extremely well, they work extremely hard, and there’s nothing that you can’t challenge them with that they won’t take on,” Giles said. “They’re a great group of kids.”