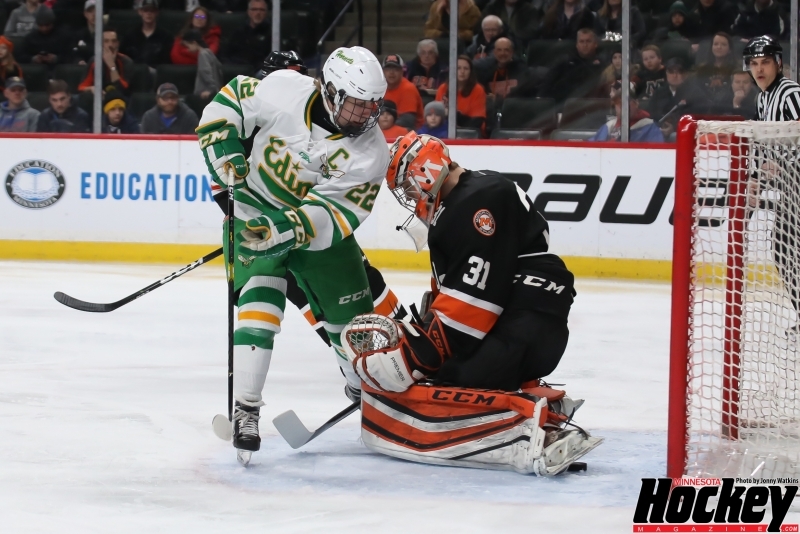 Edina’s Jett Jungels watches as his shot slips through the legs of Moorhead goaltender Hudson Hodges 53 seconds into the Hornets’ 4-2 Class 2A state quarterfinal win over the Spuds on Thursday night at Xcel Energy Center. (MHM Photo / Jonny Watkins)

St. Paul — Very little surprises Edina coach Curt Giles, perhaps nothing does, and despite annually standing behind one of the state’s best rosters night-in-and-night-out, he’ll never underestimate an opponent. So when his No. 1 Hornets jumped out to a two-goal first period lead over unseeded Moorhead, the game played out how he imagined it would.

“We knew they weren’t going to be done,” Giles said. “They’ve got a lot of character, they really do, and we knew that. When the seeding went through and we saw that we had Moorhead we knew we had our hands full this first game.”

After the teams traded second-period goals, Moorhead’s Nolan Westra scored his 22nd goal of the season with 3:07 left in regulation and the Spuds kept on pressing for the equalizer until Edina’s Kevin Delaney scored into an empty net with 30 seconds left to secure a 4-2 win to advance the Hornets to Friday’s Class 2A semifinals.

“There’s things that broke down in a couple of areas that you don’t like but I thought overall the kids played very well,” Giles said of his team. “We knew this was a tough matchup. We saw them earlier in the season and we knew they were good. They’ve got some guys that can finish and they’re physical, their goaltender plays extremely well so we knew it was going to be a heckuva hockey game.”

“We have such a fun team to be around and a team that … maybe hasn’t gotten the credit that they deserve,” Ammerman said. “They deserve to be here and I think they proved that tonight. It was just a little too late.”

Ammerman admitted the first period script was not how he’d have written it with Edina’s Jett Jungels scoring 53 seconds in and Mason Nevers adding a power-play goal on one of Edina’s three opportunities. But he was pleased with the fact that Moorhead limited Edina’s potent power play (31.5 percent on the season entering the tournament) to that lone goal on five chances with the man advantage.

“They’re extremely dynamic and with that many guys on the ice that are pretty puck-savvy with one extra person you have to game plan. What we saw is they try to get the puck to [Nevers] as much as they could … so what we tried to do is shut that down. Ultimately, he’s the guy that scored the goal.”

Giles said he knew the longer Edina let the Spuds hang around without capitalizing on its power plays it could spur trouble down the stretch.

“They shut the passing lanes off very, very well,” Giles said. “They collapsed the box down tight and what we’ve got to work on a little bit more is getting them to expand that box a little bit.”

But Giles added there is a momentum benefit to be gained from playing a man up even if the team doesn’t score and he’d get no argument from Ammerman on that point.

“Giving a team that skilled that many opportunities with the man advantage in a one-and-done situation isn’t going to be to your advantage,” Ammerman said. “Despite that, with a minute left in the game, we had a chance.”