Effective Communication between Coaches and Goalies 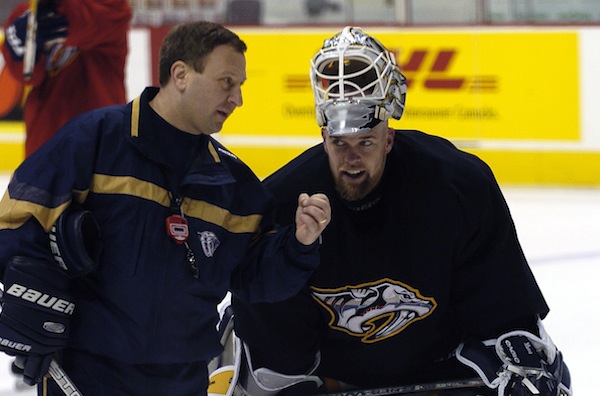 Coaches… Be Careful What You Say..…but Goalies…Listen to What the Coaches REALLY Mean

We, as parents should preach to our children to always respect and listen to their teachers and coaches.  But sometimes coaches make that difficult, especially with goalies.  Many coaches, even at the professional level, do not understand goaltending and often accidentally say the wrong things, hurting credibility and diminishing the goaltender’s willingness to listen, absorb and develop.  My job as a goaltending coach has always been, not only to work with and help teach and develop the goalies, but also to assist the members of our coaching staff in understanding the position and how not to do damage.  Here is of my favorite stories… the names have been omitted to preserve the friendships.

I was working with our minor league team.   Late in the game on a Friday night, we were winning 2-1 when a quick play in front resulted in the tying goal.  The goal scorer put the puck in the top shelf, glove side from only about 6 feet out.  The goalie let his feet (“blocking butterfly”) covering the bottom portion of the net, his arms a bit behind him.  We lost on a “good goal” in overtime.  The coach, unhappy with the fact that his goalie left his feet “too often” normally, gave him the “stand-up…stand-up” speech after the game and during Saturday’s practice.  Now, its Sunday night, we are on the road, and again we are in a tight game.  Late in the game, wouldn’t you know it, almost the same exact play as the tying goal on Friday.  This time, our goalie took his head coaches’ advice and remained on his feet, and the shooter hammered the puck, low to the goalies stick side into the net. We lost by one, plus an empty net goal.

After the game, the coach complained to me, that this goalie, who I had always promoted as having “great feet”, didn’t use his greatness.  “He just stood there,” he said.  He complained to the goalie that he “lost focus”, by standing there and watching the winning goal enter the net.  It was like he didn’t try!  WOW… check out the mixed messages from a coach who was truly being a “Monday morning quarterback”.  The puck went in high, so he should have stood… the puck went in low, so he should have gone down… both on “bang-bang” plays from about 6 feet from the net.

In reality, it’s not if the goalie should leave his feet, but rather when and how.  On a quick play as described, a goaltender has to leave his feet.  The reason the Friday night goal went in, was not because the goalie left his feet early (when), but rather because his arms (specifically his catch glove) was back too far (how) providing aerial/vertical angle space.  Move the glove up and forward, and the save is made.  Allow the goalie to leave his feet on the same play on Sunday, and maybe we don’t lose!  Do all this correctly, and it’s 4 points instead of one!  The moral of this story… You must know enough about goal tending to treat the problem not react to the symptom!  Most goaltenders hear the same cliches or classic one-liners from the coach on how to play goal.  In most cases the coach uses those cliches time and time again, and goalies, unfortunately, over time come to ignore those remarks.

Hey goalies, don’t block them out, rather attempt to understand what the coach is trying to tell you…what he really means.  “Don’t Go Down . . . Stand Up…Stand Up”.  We all know that the longer the goaltender can stay on his/her feet and move into pucks, the more success the goalie will have.  However, as it says above, the question is not if the goalie should go down, but when and how the goalies should leave their feet.  Timing is so important . . not too early . . . not too late.  With back door passes, wrap-arounds, rebounds, screens, scrambles and overall game speed, a goaltender has to go down efficiently, filling space and eliminating holes while almost always moving (laterally, diagonally, forward or backward) while dropping in some sort of manner.  THE COACH MEANS:…leave your feet at the right time in the correct way!!”  Go For the Shutout”.  The coach is suggesting that the goaltender plays a great game, a perfect game.  But a perfect game is often NOT a shutout.

What is a perfect game?  It is one where the goaltender does not allow any “bad goals” and “gives his team a chance to win” with key saves at key times of the game.
If for example, our team starts slowly (losing 1-0) and our goalie makes some big saves early, and we ultimately win 5-2, the goalie held us in, to give us a chance to win the game.  Falling behind 2-0 early,possibly would have changed the entire complexion of the contest.  In addition, do not consider every goal a “bad goal.” You cannot stop everything.  Work on eliminating the “bad ones”.  THE COACH MEANS:… “do your best…give us a chance to win”.  “Communicate With the Defense”.  Coaches often yell for the sake of yelling.  “Talk out there…communicate, communicate” tells the goalie nothing.  THE COACH MEANS:… “develop a “verbal code” with your defenseman…use pointing and eye contact to develop non-verbal communication…PRACTICE exchanges and “drop out plays””Play the Puck”.  Most coaches want the goalie to come out and play loose pucks, but nobody ever teaches the goalie what to do with the puck, or teaches his teammates how to anticipate and get into a position to receive the puck from the goaltender.

Goalies must play the puck, but should not create a turnover.  Often a goalie clears the puck around the boards blindly, and the other team gains possession.  Don’t always blame the goalie, however, if his winger on the boards fails to stop the puck, (because he expects to get hit), and the opponent’s point man makes a play.  THE COACH MEANS…”PRACTICE exchanges and “drop out plays” with the defense…improve the ability to clear pucks up the glass and out of the zone””Come Out and Cut Down the Angle”.  Coaches always tell the goalie to “cut down the angle”, but never tell you how.  Simply, the goalie must get proper depth in the crease, and be “square” by being on the imaginary line created by the puck and the center of the net.  There are markings (an on ice road map) like hash marks, dots, etc., that assist the goaltender in “squaring up.”   How far should a goalie come out? Well, that’s based on the situation, where the puck is, if there is a back door play, if your team is momentarily out numbered around the net. . . etc. . . etc.  This is a “mental decision” that requires the goalie to “read and react.”  This is the essence of positioning . . . possibly the most important mental skill.  Coming out too far in certain situations can result in easy goals.  THE COACH MEANS:… “read the play, get in the best position for the given situation””Concentrate . . . Stay Focused”.

The more I coach, and the more I talk to goalies, the more I find out that when some bad goals are scored, they are the result of the goalie “watching the game” but not really “playing the game or seeing the puck.”  They sometimes become “spectators”…looking “past the puck”.  I’ve witnessed goals go in the net off or through a goalie or have seen a goalie over-react in a non-screen situation.  That tells me that they may have lost focus, and are not following or not TRACKING the puck all the way to the net.

THE COACH SHOULD ASK. . . “Did you see the puck go in?…or…did you follow the puck all the way?…or did you track the puck off the stick?”