Landon Parker’s nifty goals carried his team to a victory. 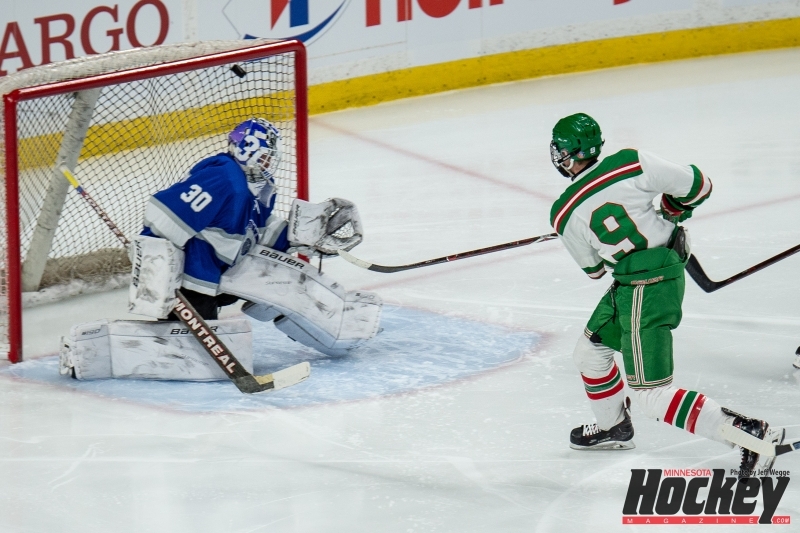 The No. 3 East Grand Forks Green Wave defeated the Minnesota River Bulldogs 5-2 thanks to a pair of timely goals from a sophomore.

The Green Wave may have jumped out to a 3-0 lead, but head coach Tyler Palmiscno wasn’t pleased with his team’s effort.

“The first two periods, I thought we fought it,” said Palmiscno. “We fought pucks and we got outworked and we got out competed. Even when the score was 3-0, I didn’t think we were really sharp in what we wanted to do.

So go figure, Minnesota River rallied and made it a one-goal game after a a pair of goals from Jade Reicks heading into the second intermission.

That’s when East Grand Forks sophomore Landon Parker took things over for his team in the early stages of the third period. After Bulldogs goaltender Andrew Regner misplayed the puck behind his own cage, Parker capitalized with a fancy toe drag in front of the net, netting a short-handed goal.

Parker knew the exact kind of move he wanted to pull on Regner.

“Yeah, I got a couple that I usually go-to,” said Parker. “But that one looked right at the time, so I went with that.”

Sixty-three seconds later, Parker once again found himself alone in front of the net and he scored for the second time in similar fashion.

“If I go backhand top shelf, he’s got me with the glove a couple of times. So I thought I’d hit him with the left side and it worked out.”

“When Landon’s on, he attacks the net with some jam,” said Palmiscno with a grin. “The first two periods, I thought we fought it. So for him to take off like that, I thought it was huge and I liked his attack mentality as he went towards the net.

“We knew after our first two periods, we were playing a little soft,” said Parker. “We knew we had to comeback in the third period and kind of make a statement and come out fast and hard and it ended up working out for us.”

With the win, East Grand Forks moves onto the semifinal round to play the No. 2 St. Cloud Cathedral Crusaders on Friday, March 8.

The Green Wave will be looking for revenge too as the Crusaders bested them 7-2 in the regular season.

And they can’t wait for the rematch.