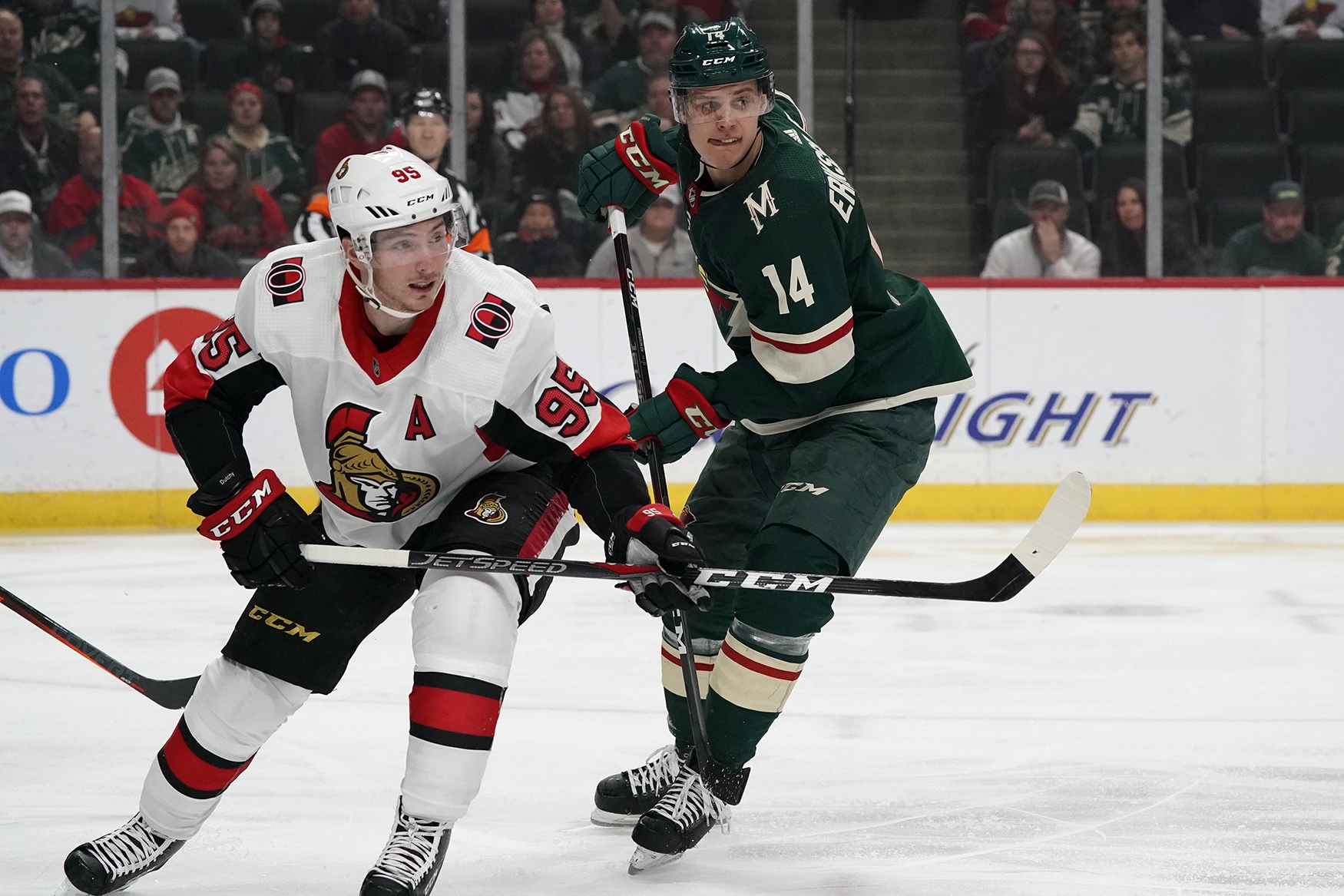 In the first game of the 2017-18 season in Detroit, Joel Eriksson Ek came streaking into the slot and buried a pass from behind the net for the Minnesota Wild’s first goal of the season. It was a highlight-reel play from a Swedish youngster.

Then Eriksson Ek went his next 50 games without a goal. He finished the season with just six goals and 10 assists in 75 games, plus one assist in the playoffs.

Of course he wants to be a player who scores goals, he said.

“I think it’s going to come if you just don’t think about it,” Eriksson Ek said. “Try your best, just work hard in practice, try to score some goals and be a little bit more patient, and you’ll get more opportunities to score.”

Eriksson Ek is in his third season (second full season) with the Wild and is still looking to find his complete game. The offensive production just hasn’t been there yet for the 6-foot-1 center. Just like his quick goal last season, he also scored in his NHL debut in a 2-1 loss to New Jersey Oct. 22, 2016. 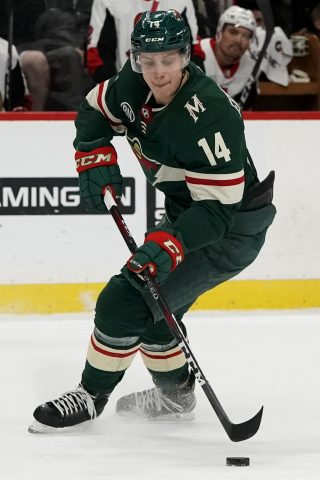 But he’s scored just 10 goals and 16 assists in 105 career NHL games. This season is also off to a slow start, hindered also by missing six games with a lower-body injury in October. He had just one goal and one assist in his first 14 games, resulting in coach Bruce Boudreau sending Eriksson Ek to the press box as a healthy scratch Nov. 17 against Buffalo.

“I just think he’s got to be able to make more plays,” Boudreau said, after the Wild’s 3-2 loss to the Sabres. “Defensively he’s good. Effort-wise he’s awesome. Penalty killing is really good.

“We just need to see a little more offensive pizzazz or whatever from him.”

Eriksson Ek returned a night later in Chicago, a game the Wild lost 3-1, with one shot on goal and a pair of hits. Still, Boudreau thought he played well and is looking for him to get more opportunities to supplement his already-solid defensive game.

“We hope it gets better or more consistently offensively-minded,” Boudreau said, ahead of the Nov. 21 game against Ottawa.

Eriksson Ek showed a hint of that “offensive pizzazz” Boudreau talked about with a very solid game against Ottawa playing on a line with Charlie Coyle and Jordan Greenway. Many thought Eriksson Ek got his second goal of the season with about four minutes left in the first period, but his shot rang the pipe. Later on the same shift, he centered the puck out front to set up Greenway’s goal for a 1-0 Wild lead.

Eriksson Ek finished the game with an assist, one official shot on goal, three hits and two takeaways – and one almost-goal.

Boudreau said after the Wild’s 6-4 victory that he thought it was Eriksson Ek’s best game, as the forward finally showed how he can shoot the puck like he does in practice.

“I’m probably a little bias because I really like him,” Boudreau said. “I want him to succeed.”

Though age is just a number, sometimes it’s a good reminder to realize this 2015 first-round draft pick is still only 21 years old, still learning the game at the NHL level.

Eriksson Ek has an opportunity to learn from some of the veterans in the dressing room, like center Eric Staal who also emphasized the point about Eriksson Ek being a young guy on the team. It’s about staying with the program, improving every day in practice and just believing the offense will come, according to Staal.

“But overall, he’s a guy that I think Bruce trusts putting on the ice, and that’s what you want as a young guy,” Staal said.

The Wild (14-7-2) are winning games this season, which Eriksson Ek said makes his scoring drought a little easier to take. The mental side may be tough, but he said he’s learning every day from his teammates.

“I think outside the rink you have to relax and get your mind somewhere else,” Eriksson Ek said. “I think that’s a big thing for me, and I’m still learning how to play up here. I’m still 21 years old.”

Ultimately, the Wild have thought from the start that Eriksson Ek would be a third-line center – at the minimum, according to Boudreau. He also hinted about the future, going on to say that when other players move on or retire (hint, hint, Mikko Koivu or Staal), Eriksson Ek could also become a second-line center.