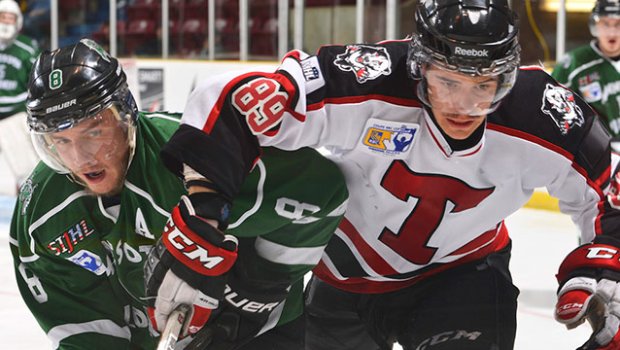 SUMMERSIDE, P.E.I. – Mark Reners’ second goal of the game 8:30 into overtime was the winner as the Brooks Bandits advanced to the championship game at the 2013 RBC Cup with a wild 5-4 semifinal win over the Minnesota Wilderness on Saturday afternoon.

RJ Reed found Reners all alone between the hashmarks in front of the Minnesota goal, and the Bandits forward made no mistake, sending Brooks, the top-ranked team in the Canadian Junior Hockey League for the final 22 weeks of the regular season, to the national final on Sunday night (7 p.m. AT) against either Surrey or Summerside.

The overtime goal completed Brooks’ comeback from a 4-2 third-period deficit that included Dakota Mason’s tying goal from behind the Wilderness net with just 18.7 seconds left to force overtime.

Reed scored the other two goals for Brooks, which saw a 1-0 lead after one period turn into a 4-2 disadvantage after two. Reed and Taylor Makin finished with two assists apiece, while Reners added a helper for a three-point game.

Jordan Shockley, Conrad Sampair, Mike Dietrich and Nick McCormack had the goals for Minnesota, which erupted for four goals in just under 16 minutes in the second period to take a two-goal lead to the third.

The Wilderness were set to become the second No. 4 seed in as many years to beat the top team in the semifinals, after Woodstock topped Humboldt in overtime last year.

The Bandits scored the lone goal of the first period when Reners took a pretty touch pass from Makin and beat Minnesota net minder Gordy Defiel, who was caught going the wrong way.

It only took 44 seconds for the Wilderness to tie the game and take the lead early in the middle frame; Shockley finished off a two-on-one with Jeremy Johnson, going high over the glove of Brooks goaltender Michael Fredrick, before Sampair drove the Bandits net and redirected a centering feed from J 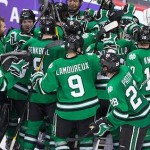 Reed tied the game with an absolute rocket on a Brooks power play at 13:13, but Dietrich and McCormack scored late in the second period to give the Central Region champions a surprising two-goal lead heading to the final 20 minutes.

Once again it was Reed who scored a big goal for the Bandits, blasting another shot past Defiel on another Brooks power play, setting up a finish that will go down as one of the craziest in RBC Cup history.

With Fredrick on the bench for an extra attacker and the Bandits buzzing, Defiel made a save to his right that pulled him out of position. The puck found its way to Mason, who blindly threw the puck in front of the Minnesota net, finding the skate of a Wilderness defender and tying the game with 18.7 seconds on the clock.

Feeding off the momentum of Mason’s goal, the Bandits swarmed the Minnesota net in overtime, and were rewarded with Reners’ winner, sending the Brooks to the final in its first-ever appearance at the RBC Cup.

SUMMERSIDE, P.E.I. – Cam Maclise scored once and added an assist to pace the offense as the Brooks Bandits were crowned national champions for the first time, beating the Summerside Western Capitals 3-1 in the final of the 2013 RBC Cup on Sunday night.

The Bandits are the eighth team from the Alberta Junior Hockey League to win Canada’s National Junior A Championship, and the first to do it since the Camrose Kodiaks won their lone national title in 2001.

Anthony Petruzzelli and Dakota Mason also scored for Brooks, which became the second team in as many years to win the RBC Cup after finishing the season in the No. 1 spot on the CJHL Top 20 rankings; Penticton did it last season.

Chris Caissy had the lone goal for Summerside, which lost the national final on home ice for the second time in three tries; it fell to Thunder Bay in the 1989 championship game before beating South Surrey in 1997 for its only national crown.