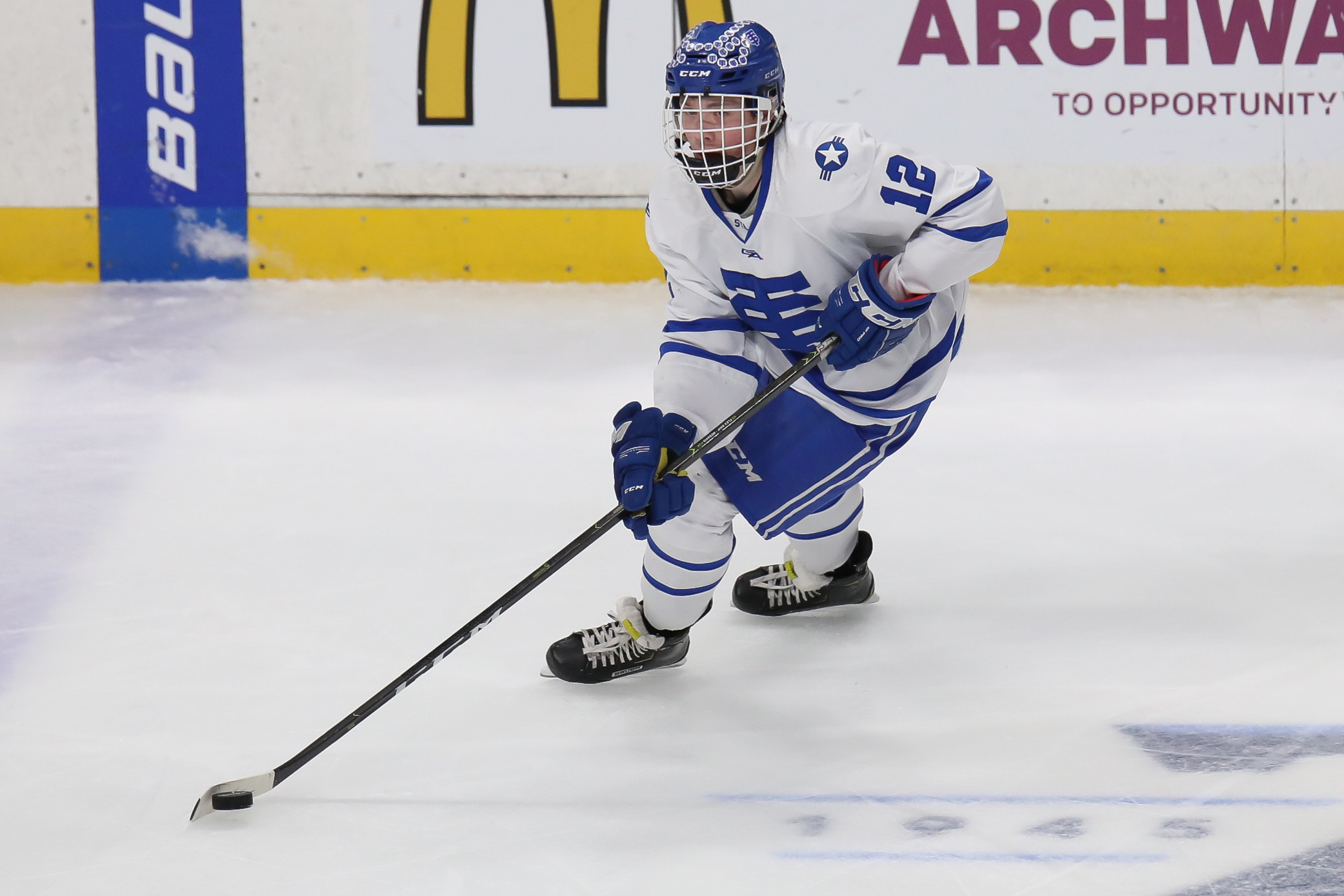 St. Thomas Academy’s Ryan O’Neill and one of the sticks he left behind when the Cadets bussed to St. Paul for their Class 2A quarterfinal against Duluth East. O’Neill scored twice in STA’s 3-1 win over the Greyhounds on Thursday night at Xcel Energy Center. (MHM Photo / Jonny Watkins)

St. Paul — Ryan O’Neill stood ready to warm up with his St. Thomas Academy teammates ahead of their Class 2A  state quarterfinal meeting with Duluth East but, unlike his fellow Cadets, O’Neill was on his phone. He was speaking with his father checking the ETA for delivery of the precious cargo his dad was transporting: Ryan’s hockey sticks.

“Coach (Greg) Monohan had to go meet him at the door with the sticks right before warmups so that was a big relief,” O’Neill said.

O’Neill used at least one of them to score twice, including the game winner with 7:15 remaining in regulation to lift the No. 4 seed Cadets to a 3-1 win over the No. 5 Greyhounds to advance to a Friday semifinal meeting with top-seeded Edina. With the win, St. Thomas Academy completed a quarterfinal sweep for Class 2A ‘s top four seeds.

“The pressure and the whole anxiety about this tournament, obviously I could see how it could happen if you could be in their shoes  to see how big a deal this thing is,” St. Thomas Academy Co-Head Coach Greg Vannelli said. “But I forgive him now.”

O’Neill opened the scoring midway through the first period with a laser of a shot that beat Duluth East goaltender Brody Rabold over his right shoulder. After Charlie Erickson’s second period goal for the Greyhounds made it 1-1 entering the final frame, O’Neill notched his 21st goal of the year, one-timing linemate Nico Vega’s pass over Rabold’s left shoulder.

“He’s the most underrated, under-the-radar forward in the state,” Vannelli said. “We knew what we had with Ryan and he’s been a key guy all year offensively. That line today was phenomenal. They had good puck possession; they have not been outplayed all year.”

McClain Beaudette’s empty-net goal with 1:28 remaining sealed St. Thomas Academy’s first state quarterfinal win in four trips to the state tournament since the Cadets bumped up to Class 2A six years ago.

“Our team just had a lot of confidence coming into this game,” O’Neill said. “We just kind of felt, especially as seniors that we were going to win this game.”