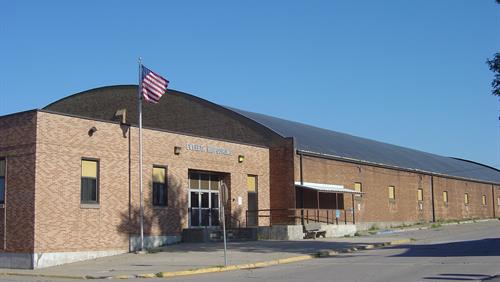 The focal point of the Eveleth hockey community is the beloved old Hippodrome, or better known as the “Hipp”. The Original Hippodromestructure at 230’x 150′ with seating for 3,000 spectators was built of wood by Mayor Essling in the 1920’s at a cost of $50,000 for the powerful EvelethReds hockey team, in the United States Amateur Hockey Association. The first game in the Hippodrome was on January 1, 1922 before a packed house where the Eveleth Reds defeated the Duluth Hornets 10-6. The structure in the 1920’s was referred to as the “Madison Square Garden of the Northland”. In 1938 the original Hipp was renovated with brick-replacingall of the wood walls, a new lobby was also added at this time to the south side of the building that is still in place. In 1938 additional construction led to more seating, new locker rooms installed in the basement, and all of the original steel beams and trusses were renovated the cost for all of the repairs, additions in 1938 was $150,000 (5 times the cost of the original building’s cost in 1920!) Until 1950 the Hippodrome relied on mother nature to help make good ice since the ice was “natural ice”. In 1950 refrigeration, concrete flooring, and artificial ice made it’s way into the Hippodrome. In 2002 four new locker rooms were added, along with 2 new coaches rooms. The old “concrete boards” were replaced with more modern era boards that are commonly used in NHL rinks today.

The Hipp has provided a home for many great Eveleth hockey players and legends of the game, the arena’s fans have witnessed many notable hockey, basketball games and great players. The proud traditions of Eveleth hockey are forever embodied in the Hippodrome. Today the Hippodrome is home to the Eveleth-Gilbert Golden Bears hockey team. Upon visiting the Hockey capital of America in Eveleth and the USHHOF it is highly recommended that every hockey fan should venture down to the corner of Douglas and Jackson streets to witness the old historic Hippodrome, the building itself just reaks with hockey history including historic photos, jerseys, banners, and other Eveleth hockey artifacts that line the walls of the “Old Hipp”.  John Mayasich once quoted in an interview to me:  “The true USHockey Hall of Fame IS the Hippodrome”.

Kyle is the webmaster/owner of Vintage Minnesota Hockey and a Minnesota hockey player and fan,.