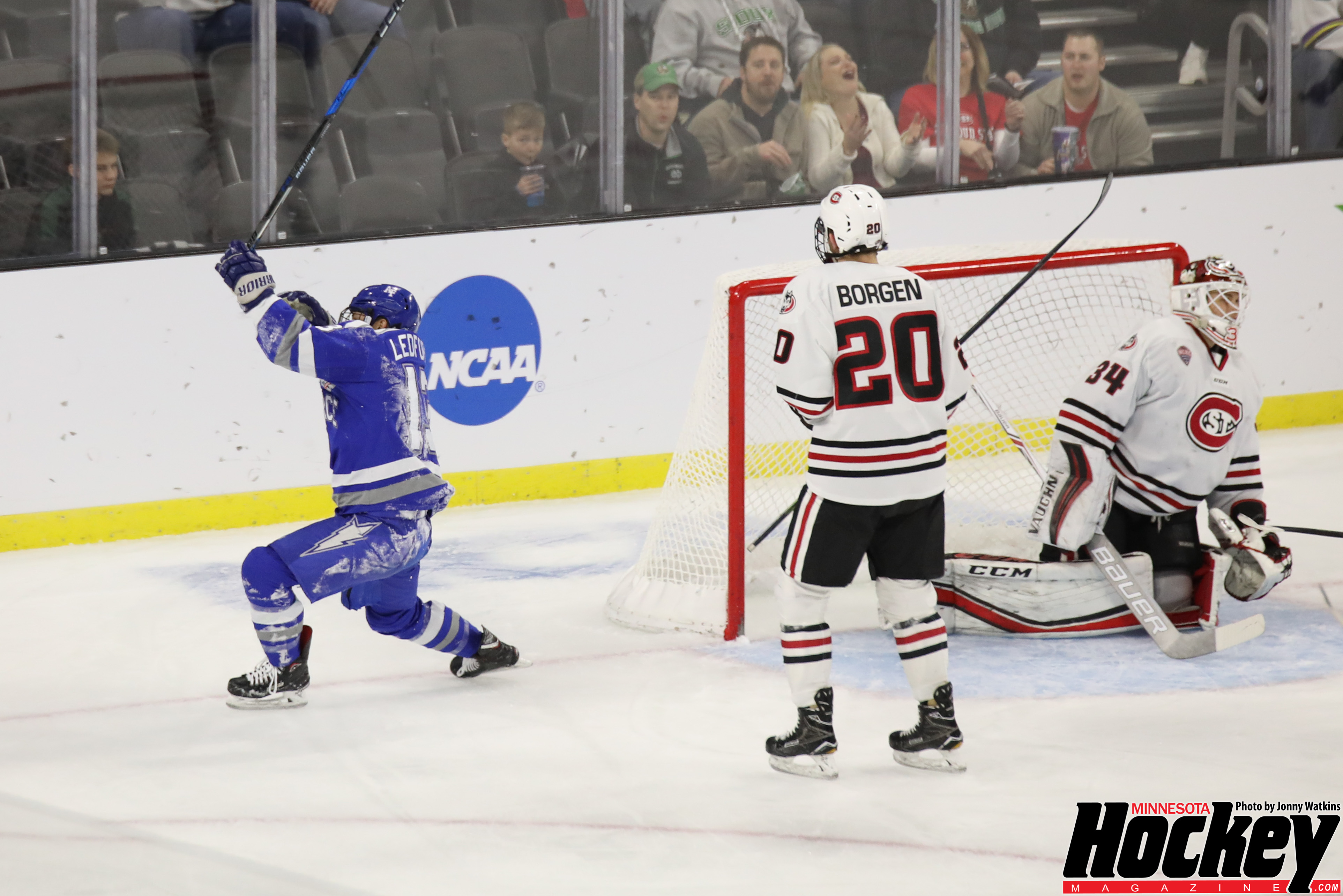 Air Force’s Tyler Ledford celebrates his second goal of the game which turned out the be the game winner in the 16th-seeded Falcons’ 4-1 win over No. overall seed St. Cloud State the NCAA West Region semifinals Friday afternoon in Sioux Falls, S.D. (MHM Phot0 / Jonny Watkins)

SIOUX FALLS, S.D. — Those who proudly wear St. Cloud State red and black would like to say this isn’t familiar territory, but lately, it appears to be the truth.

The No. 1 overall seed of the NCAA Tournament Huskies fell to Air Force 4-1 in the West Region semifinals Friday afternoon at the Denny Sanford Premier Center.

“It’s miserable,” junior forward Robby Jackson said. “I just sucks, man. I don’t even know how to put it into words. We battled tooth and nail, but we couldn’t solve their goalie today.”

Air Force improves to 23-14-5 and will face either Minnesota State or Minnesota-Duluth in the regional final at 8 p.m. Saturday. St. Cloud State finishes the season 25-8-6.

The Falcons, ranked well beyond the top 16 in the PairWise Rankings and qualified by winning the Atlantic Hockey playoff title, struck twice early in the second period on goals by Tyler Ledford after the first 20 minutes went scoreless. 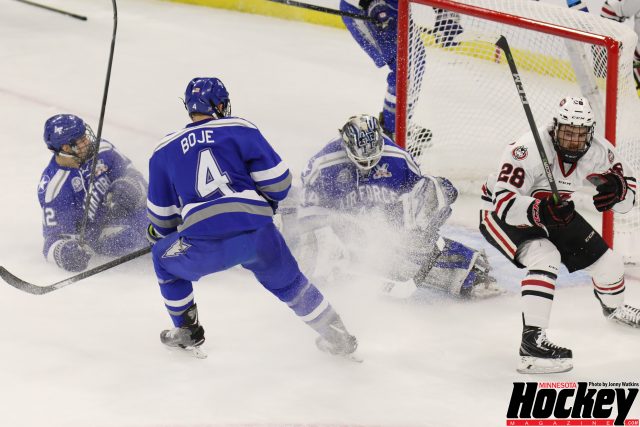 The chances SCSU failed to score on or were stopped by Air Force goaltender Billy Christopoulos from that point on will surely haunt the Huskies, who had 18 shots in the second period.

“The second period was crazy, the chances we got,” SCSU coach Bob Motzko said.

The Huskies are 1-4 in their last five NCAA tournament games and the only lead they had in any of those was a one-goal lead for a 7 ½ minute stretch early in the 2015 West Region final against North Dakota, which UND won 4-1.

There was the 4-0 loss to Minnesota in the 2014 West Region final, followed by a first-round overtime win against Michigan Tech in 2015 in which SCSU never led until the OT goal.

And then, the overtime loss to Ferris State in the 2016 West Region when the No. 2 overall Huskies rallied to tie the Bulldogs, only to lose in overtime.

“I never thought we’d hurt worse than we did when we lost to Ferris, but here we are,” Jackson said.

The NCAA tournament has been a lot more kind to Air Force, which beat Western Michigan in the 2017 first round and has now won three tournament games in program history.

Air Force scored its first goal three minutes into the second period when Ledford broke up a soft pass from SCSU Jimmy Schuldt and knocked it out of the air and past goalie David Hrenak. Officials went to the monitor to check if Ledford’s stick rose above the plane of the cross bar, but the goal was called good on the ice and evidence of a high stick playing the puck was deemed inconclusive.

Ledford tipped home a Matt Koch centering pass for another goal and his sixth of the season, and then Christopaulos became the star of the show.

The junior from North Carolina stretched across the crease to reach out and rob the Huskies with his glove in the second and third periods, once on a cross-ice pass from Ryan Poehling that hit Jackson in the skates before he could shoot, allowing Christopaulos time to get over.

“(Christopaulos) is dialed in right now,” Motzko said. “If he stays dialed in, Air Force is going to win tomorrow. Someone’s gotta score on this kid.” 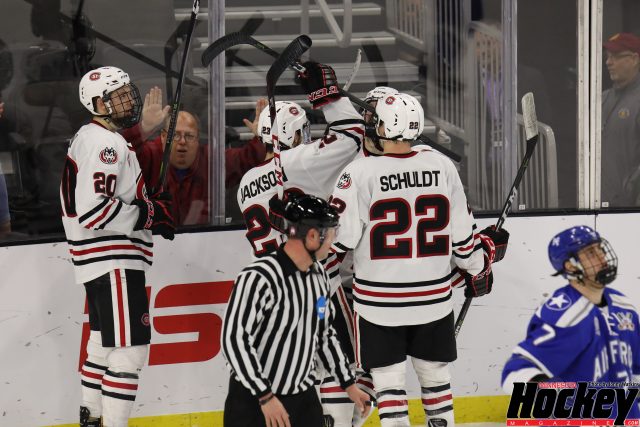 The Huskies scored with time ticking away on their season with 2:51 left in the third period. Blake Lizotte entered the zone and hit Newell on a pass near the far boards and Lizotte redirected Newell’s shot into the goal.

SCSU pulled Hrenak after the Huskies won the ensuing faceoff, but the Falcons gained possession of the puck as he got to the bench, leaving the net wide open as Air Force skated the puck through the neutral zone.

Jordan Himley sent the puck into the net for Air Force, effectively sucking out of the building whatever steam SCSU had generated and added another empty netter shortly after.

“We played the whole game waiting for that big goal to go in, but it came a little too late,” Motzko said. “We all know now, parity in college hockey has never been greater.”