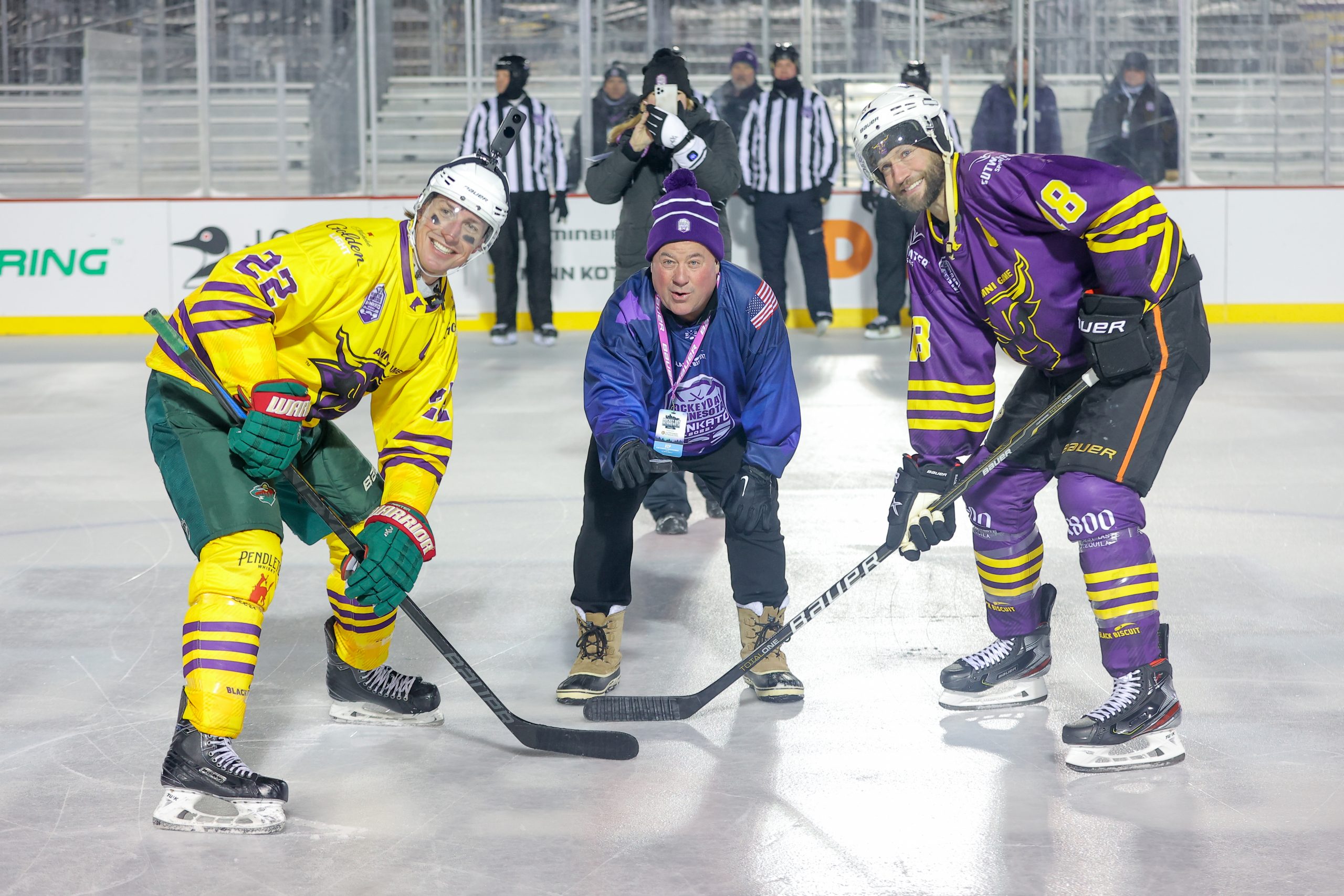 Mankato waited an extra year to host Hockey Day Minnesota. Turns out, one of the biggest benefactors of the pandemic-related delay might have been NHL star David Backes.

“Well, I was still playing last year,” Backes said. “So if it was last year, I would have missed out on it. Now with the delay, I’m retired and able to come to a cool event like this.”

Backes played for Minnesota State men’s hockey for three seasons from 2003-06, scoring 46 goals and 119 points in 115 games. From there, he played with St. Louis, Boston and Anaheim in the NHL and played in two Olympics before announcing his retirement this past September after 965 career NHL games.

He returned to the Minnesota State campus for the Hockey Day Minnesota weekend; he said he hadn’t seen a game in Mankato since he left and looked forward to watching the current Minnesota State Mavericks take on St. Thomas outdoors.

Backes also laced up his skates for the Minnesota State alumni game on a Friday night with falling snow and frigid temperatures creating quite the hockey atmosphere. The Spring Lake Park native was the captain for Team Blue, named for longtime former assistant coach Darren Blue. Brooklyn Park native Tim Jackman joined Backes on the team as well.

On the other bench, former Wild player Ryan Carter was the captain for Team Brose, named for former and legendary Minnesota State coach Don Brose, who was also on hand for the game. Brose started with the program as a coach in 1969 before his final season in 1999-2000, a team that finished 21-14-4.

“Oh, I had a lot of fun,” Brose said after the alumni game. “I hadn’t been on the bench for 21 years. To see the camaraderie and the talking, the trash-talking back and forth, it was fun. And I didn’t get a bench penalty.”

The score of the game (played in a pair of 25-minute, running-time halves) was secondary – 5-4 in favor of Team Blue – to the atmosphere and camaraderie on the ice. Although Team Brose came oh-so-close to tying it up in the closing seconds on a shot from Shane Joseph. That pipe at the end was a favorite moment for Brose, he said.

Pat Carroll, class of 1985, played on Team Blue with former NHLers Backes and Jackman. Carroll is an Edina native and currently assistant coach for the Gustavus Adolphus College women’s hockey team. His brother, Mike Carroll, is the head coach and brother Steve Carroll is another assistant.

The alumni game was a fun opportunity for Pat Carroll.

Carter got close to a goal a couple of times but didn’t quite convert on a goal in the game. He stood out on the ice, in the first half wearing a camera on his helmet to take in the action as he skated. He also wore his Wild-green gloves and breezers with his MSU yellow jersey.

“I tell you what, I was scrambling for some gear,” Carter said. “I didn’t want to wear my Wild gear, but I don’t skate a lot, I don’t play a lot. It’s the only gear I really have.”

Backes actually had a productive night on the ice, scoring a goal and two assists.

“That’s a blind squirrel finding a nut,” Backes said. “You know what? It was fun to be out there, and guys were having a blast, and that’s kind of what it’s all about. We’ve got a couple generations of Mavericks here.”

Not only did both Carter and Backes have success in the NHL, they also played together at Minnesota State. Carter played at MSU for two seasons (2004-06). The Mavericks were 13-19-6 in 2004-05 and 17-18-4 in 2005-06 under Troy Jutting. The Mavericks had four straight losing seasons before Hastings took over behind the bench in 2012-13. Since then, the winning percentages have all been above the .500 mark.

The Mavericks are a notable team in the conference and on a national level. They’ve played in six NCAA tournaments and have won multiple MacNaughton Cups, the trophy for the team that wins the WCHA each season. The Mavericks were a program that had reached 20 wins in a season only twice in its first 16 seasons in Division I hockey, but Hastings’s squads have won no fewer than 21 games during his tenure.

It’s seen plenty of growth since Jutting arrived on campus, first as a player.

“When I got here in 1983, it was all cornfields out past here and we played in a small rink,” Jutting said. “To see where this hockey program’s grown to is just phenomenal.”

Hastings has done a great job as a coach who motivates people, Carter said.

“Hasty does a great job,” Carter said. “He cares about the guys, and in return they put it all out there on the ice for him. The end result is usually a positive one.”

Backes, too, said he takes pride in the growth of the Mavericks program, while acknowledging that he was part of that growth. Carter is proud, too, and doesn’t mind the bragging rights in conversations either, as a Maverick alum.

“You think about the old WCHA, and it was Minnesota, North Dakota, Duluth, St. Cloud and is was kind of like, ‘Oh, you go to Mankato? Oh. Good for you,’” Carter said. “And it’s taken time, but now it’s like, ‘Oh man, you’re lucky. You go to Mankato.’”

Carter gives credit to all the players who’ve come up under Hastings to help produce on the ice and for bragging rights.

Seeing the Mavericks turn into a perennial contender and ranked nationally over the past decade under coach Hastings is a source of pride for guys like Carter and Backes, who said he has his “pom-poms out supporting them” whenever the Mavericks reach the national tournament.