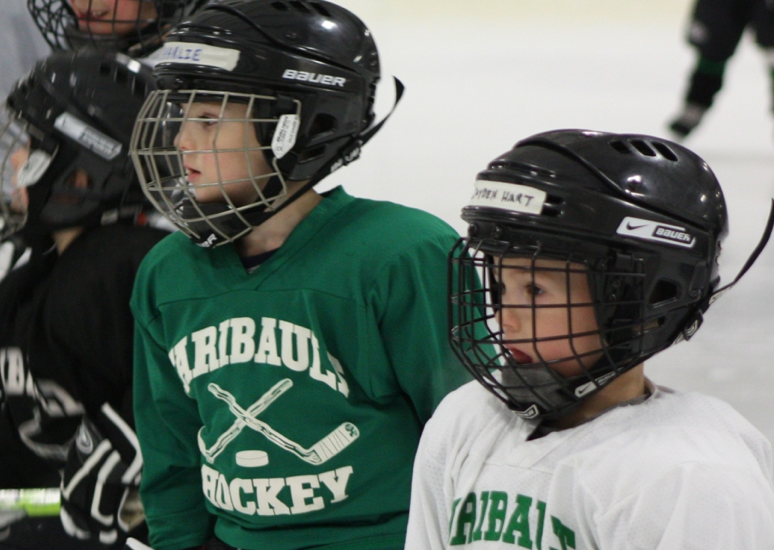 Situated 50 miles south of Minneapolis is the town of Faribault. Plenty of elite hockey players have skated there, but none were actually from there, making it an unusual dichotomy in Minnesota.

Only once has a Faribault boys high school team qualified for state-tournament play, that coming during the Minnesota State High School League’s brief and ill-fated Tier II tournament experiment in 1993 (the Faribault girls also have one state tournament appearance to their credit, in 2010).

But all of these players were imports, merely stopping by Faribault’s famous finishing school. Grassroots hockey in the community never reached the same level of success, a reality that chaffed some of the citizenry.

After parlaying his college career into two seasons of professional hockey, Weasler returned to Minnesota in 2004 and joined the corporate ranks. His passion for hockey remained, so he also coached at the high school level and helped guide his sons’ youth teams in the Twin Cities suburbs. Then, in the summer of 2012, Weasler accepted a dual offer to coach the Faribault High School boys’ team and become director of hockey operations for the youth association. His mission became aiming grassroots Faribault hockey toward a higher trajectory. Part of that process involved installing USA Hockey American Development Model principles.

Without “big association” numbers, Faribault faces some small-association challenges. One of them is finding the right level of competition. An in-house mite league was built, which helped reduce costs of participation and travel, but it lacks in opponent diversity, since there are only enough players to roster three teams. Road trips, however, often yield opponents that are either identical or dramatically different, netting the same degree of skill development – or less – in exchange for greater costs. It’s a well-known obstacle to generations of Faribault hockey families.

Another challenge is Faribault’s limited pool of coaches. It’s not a huge city and not a hockey hotbed, so the number of volunteers willing and able to nurture kids’ on-ice talents from November through March is finite. Without the seemingly inexhaustible supply enjoyed by its suburban neighbors to the north, Faribault is at a disadvantage.

But Weasler, along with the association board, thinks the ADM can help Faribault overcome some of these challenges.

The association aided its coaches by increasing use of ADM practice plans and by developing a vision for putting more teams (and thereby more coaches) on the ice simultaneously in station-based practices. Cross-ice games have become the norm for mini-mites and an increasing standard for mites. The teams have also embraced USA Hockey-recommended practice-to-game ratios, which Faribault customized to include use of a smaller-sized “studio” rink at SSM for unstructured small-area games. The association also created a learn-to-skate program that better prepared kids to excel in mite hockey. One player, who began the season in learn-to-skate, graduated to mites at mid-season. He struggled a bit at first, but he continually improved, building his skills in the mite ADM practices. On the season’s final day, he scored his first-ever goal, giving everyone in the association a memorable success story.

“It’s new and it’s different, but our parents – especially our newest parents – love it,” said Weasler.

One of those parents is Cale Politoski, a former defenseman who helped win a conference championship at St. Norbert College in 1997. Today he’s a hockey dad and also the head coach of Shattuck-St. Mary’s Midget U16 team. His son, Andrew, plays mite hockey in Faribault.

“This past year for my son was awesome,” said Politoski. “And I completely give credit to the ADM for making this season as fun as it was. The kids were moving around, they were active and never once did my little guy say it was boring. This had to be one of our best-attended years of mite hockey (in Faribault). We never struggled with numbers. Our kids wanted to go to hockey.

“In terms of skill development, I can say confidently that every player took strides forward, from our best to our lower-level, and that was due to the kids being active, getting more puck touches and being put into ‘like-ability’ groups that prevented players from being overly dominating against weaker skaters. Plus, it created little rivalries that helped kids compete.”

Politoski was pleasantly surprised by the degree skill development he witnessed.

“It was great for our mites,” he said. “In terms of player development, we need to stay with this model. We need to keep enforcing the necessary skills to play the game: skating, shooting, passing. There’s no need to rush teaching systems or any of that stuff. Repetition is good. Being active is good. Tons of puck touches are good. We’re building our players’ confidence, and as a result, their success will continue as they move up to squirts, peewees, bantams and beyond.

“Let’s face it. None of these kids are running the power play for the Minnesota Wild tomorrow. It’s important that we and the other parents understand that. But by continuing to focus on skill mastery now, well, who knows? We may one day see a Faribault player indeed running the power play for the Wild. But let’s continue to focus on the now, on skill development, instead of focusing on 15 years down the road.”