Ex-UMD star keeps tabs on Bulldogs while excelling in Carolina 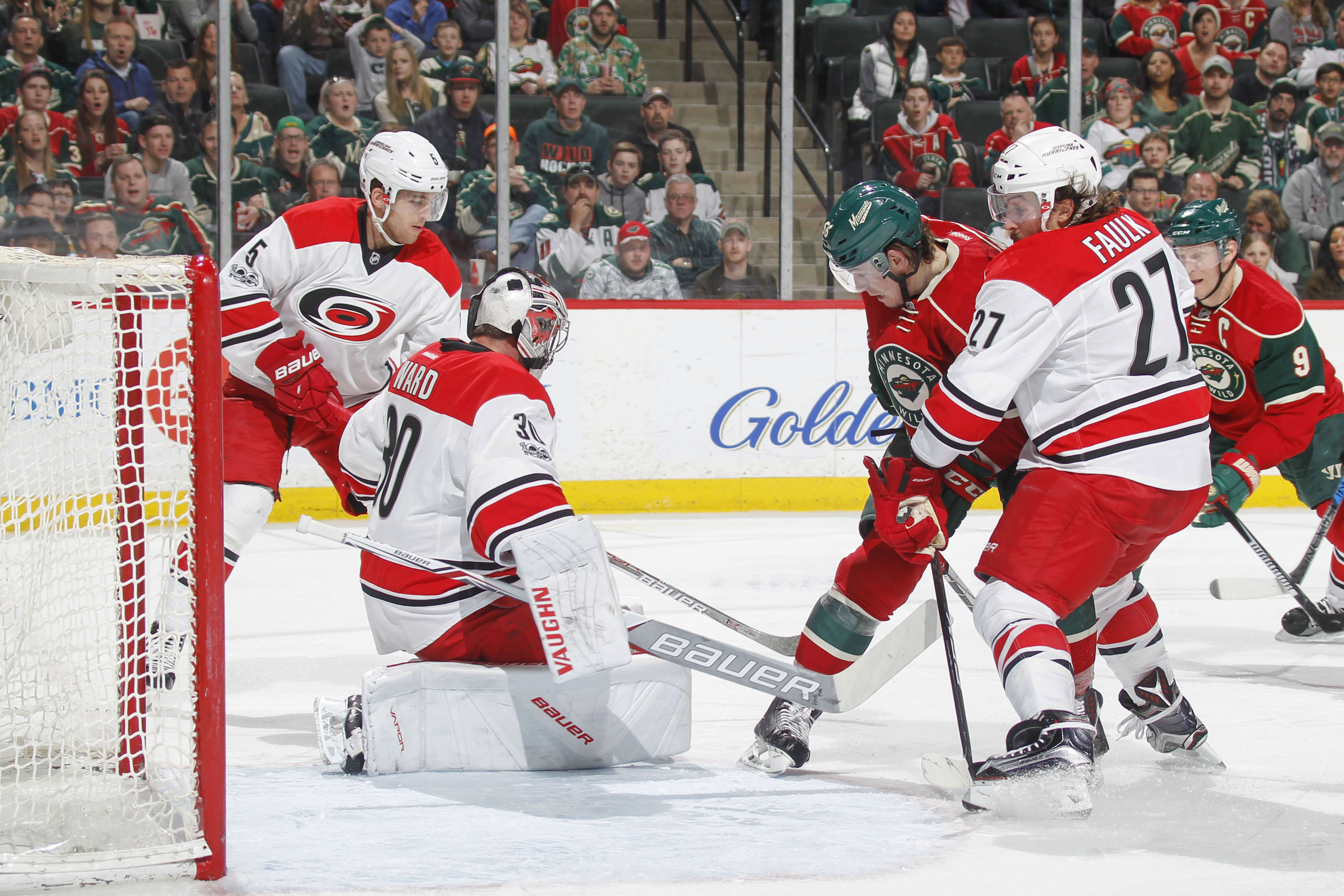 Carolina’s Justin Faulk  (27) defends against the Minnesota’s Erik Haula during Tuesday’s game at the Xcel Energy Center. The Wild defeated the Hurricanes 5-3. (Photo by Bruce Kluckhohn/NHLI via Getty Images)

Ex-UMD star keeps tabs on Bulldogs while excelling in Carolina

SAINT PAUL — As the Minnesota Duluth Bulldogs make final preparations for their first Frozen Four appearance in six years, an old friend of theirs paid a visit to the scene of the team’s single greatest moment.

“That room over there was pretty friendly to me in 2011,” the former UMD star said of the dressing room the Bulldogs used to celebrated the night Hermantown’s Kyle Schmidt scored 3:22 into overtime to lift Minnesota Duluth to a 3-2 win over Michigan and its first national championship.

Faulk, who had three assists in UMD’s 4-3 semifinal win over Notre Dame two nights before, was reminded of the team’s bleach-blonde hair they sported in unity that weekend.

“Orange, probably more so,” Faulk corrected. “But yeah, that was a phase. Well worth it. A lot of fun that year for us.” 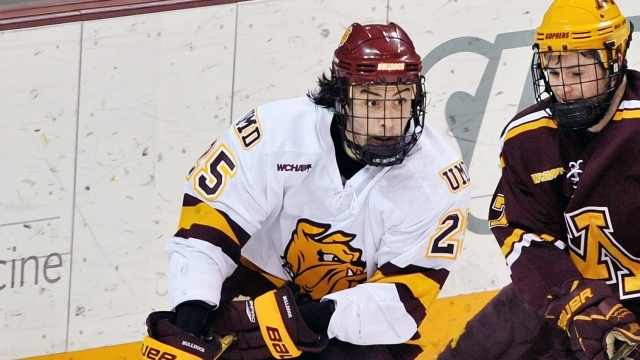 In Faulk’s one and only season in Duluth, the South St. Paul native led all Bulldogs defensemen in goals (8), assists (25) and points (33) in 39 games. After squeezing a stint with Team USA at the World Junior Championship into his collegiate season, Faulk signed with the Hurricanes shortly after the Frozen Four.

Faulk said he’s happy to see UMD back in the hunt for a national title and praised coach Scott Sandelin for what he’s accomplished in his tenure.

“Nothing against the guys, but it’s not like he has team full of high draft picks,” Faulk said. “I think there’s like four or five on the team every year and that’s about it. He just finds a way to be successful and produce a pretty good product on the ice every year.”

Faulk, who is scheduled to play his 400th NHL game when Carolina hosts the St. Louis Blues on Saturday, has carved out a nice career for himself in Raleigh.

In all or part of six NHL seasons, Faulk has amassed a franchise-leading 66 goals among defensemen and his 191 points are good for fourth all-time behind Dave Babych, Glen Wesley and Mark Howe.

With his 17th goal of the season on Sunday in Pittsburgh, Faulk broke the franchise record for goals in a single season by a defenseman he tied last season with former Hurricane Anton Babchuck. Faulk currently holds three of the top four goal scoring seasons by Carolina defensemen.

His goal on Sunday was the result of some good fortune when his blast from the high slot glanced off Pens forward Nick Bonino before caroming off the glass behind the Pittsburgh net and off the back of stunned Penguins goaltender Matt Murray.

“I’m just getting some good looks, good opportunities,” Faulk said. “Just trying to shoot as many pucks at the net as I can and get a couple bounces.”

Is he looking for some of that puck luck for the Bulldogs this weekend?

“I don’t think they need the puck luck but I think they’ll be fine either way,” Faulk said. “I’m pretty excited for them.”