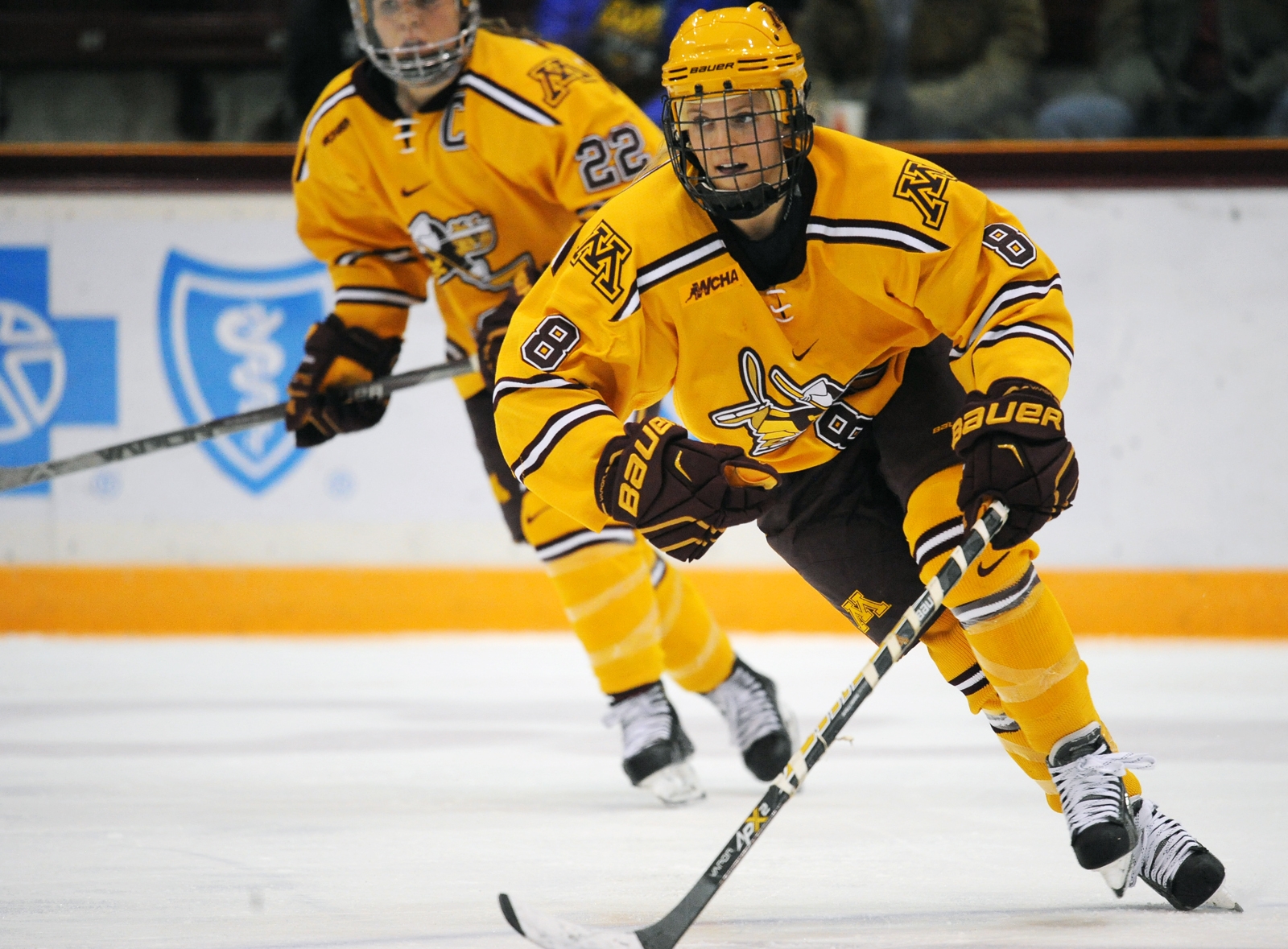 Star forward Amanda Kessel returned to the Gophers last week after nearly a three-year absence due to complications from a councussion she suffered training for the Olympics in 2014. (Photo by Nick Wosika)

For someone who has won collegiate national titles and a silver medal at the Olympics, Amanda Kessel has seen some pretty dark days over the last year and a half.

“I don’t think anyone knows what that’s like, unless you’ve had a concussion,” Kessel told me by phone. “It’s very depressing. No one really understands, they can’t see anything.”

To understand what she’s been through, you have to go back to September of 2014, when she was forced to stop playing hockey and withdraw from the University of Minnesota. Just a year earlier she had won the prestigious Patty Kazmaier Award as the nation’s top women’s college hockey player.

But Kessel sustained a concussion while training with Team USA before the 2014 Olympics. While she played in the games in Sochi, afterwards her condition never improved. It got so bad that she could no longer play the game she loved.

“(It was) by far the toughest two years of my life.”

Kessel had seen more doctors than she could count, but the symptoms would just not subside. Her activity was minimal, her involvement in hockey even less.

“I honestly didn’t even pay attention to hockey too much, because it was just too hard on me,” she explained.

As hard as it was, the fighter in Kessel never backed down. Even facing what she assumed to be the inevitable, she never gave up hope that she could return.

“In the back of my head I always knew I still want to play hockey but I was unsure I would.”

But in August of 2015, things turned around thanks to Kessel’s willingness to see yet another specialist. Dr. Michael Collins, from the University of Pittsburgh, specializes in sports related concussions. His idea for treatment was completely different. Instead of sitting back and being, what Kessel called a “couch potato,” he opted for a more aggressive approach which called for “pushing back” against the symptoms instead of succumbing to them.

“He told me, ‘You’re OK. You’re gonna get healthy and you’re going to play hockey again,’” Kessel said. “And I think that I needed that.”

The treatment worked. According to Kessel, within a month she started to feel better. She started going to school and feeling more normal than she had in a long time and skating on her own. All the while, Kessel’s father was in contact with Gopher women’s hockey coach Brad Frost to let him know about the new treatment and the success she had been having with it. 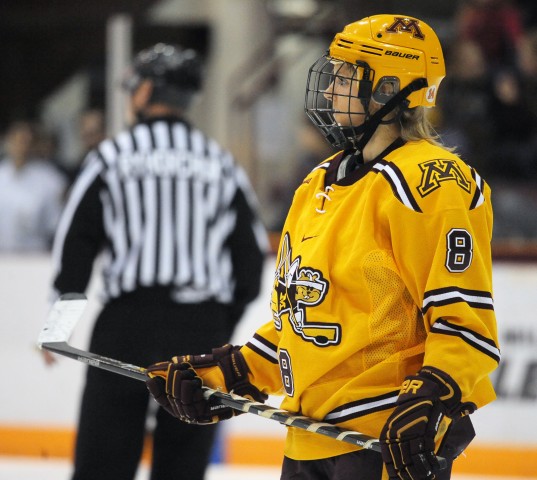 Amanda Kessel takes in her surroundings in her first game back in maroon and gold on Friday, Feb 5. (Photo by Nick Wosika)

She continued to ramp up her activity. In December she began skating with the team while her coach made sure to keep her safe.

“That first week or two we had her in a red (non-contact) jersey,” Frost recalls of Kessel’s return to the ice. “We just wanted her to work her way back the best she could and see where it went from there.”

Where it went was to a place Kessel could hardly have imagined it going just a few months earlier. In January the program announced Kessel would rejoin the team for its final 16 games. It was biggest and most exciting victory of her young and promising career.

“I was a completely different person,” Kessel recalls. “Hockey and my competitiveness was a big part of who I was. So I didn’t really feel like myself for the past two years and to get that back it was a huge part of me.”

Amanda Kessel became a Gopher again last Friday night against rival North Dakota. It was her first collegiate hockey game in more than two years. Naturally the moment she set foot on the ice for the first time, was one she’ll not soon forget.

“It put a huge smile on my face,” Kessel said. “I was excited. In shock, but excited. The fans were unbelievable with their support. It was loud in there.”

She had two assists in her debut but admits it’s going to take some time before she feels completely normal on the ice again.

“It’s just that game shape. Different plays and how they develop and finding your sweet spot. Those things take a little time to get back.”

However, this time she has a plan for getting those things back. Instead of just having hope that one day she’ll wake up and all will be better, this time she can practice and work at it — getting her slowly back to the player she was. The player that so many believed to be one of the greatest that the game had seen in a long time.

Kessel has the rest of this season with the Gophers and then her shortened college career is done. She hopes to once again play in the next Olympics in 2018 and maybe even try her hand at women’s professional hockey. Still there is a part of her that feels cheated.

Kessel lost two years of a college career that had her on track to be one of the best in school history. But any feelings of bitterness have now faded, replaced by the elation of getting hockey back and making her whole again.