Historic sweep of Chicago puts Wild on the verge of playoffs 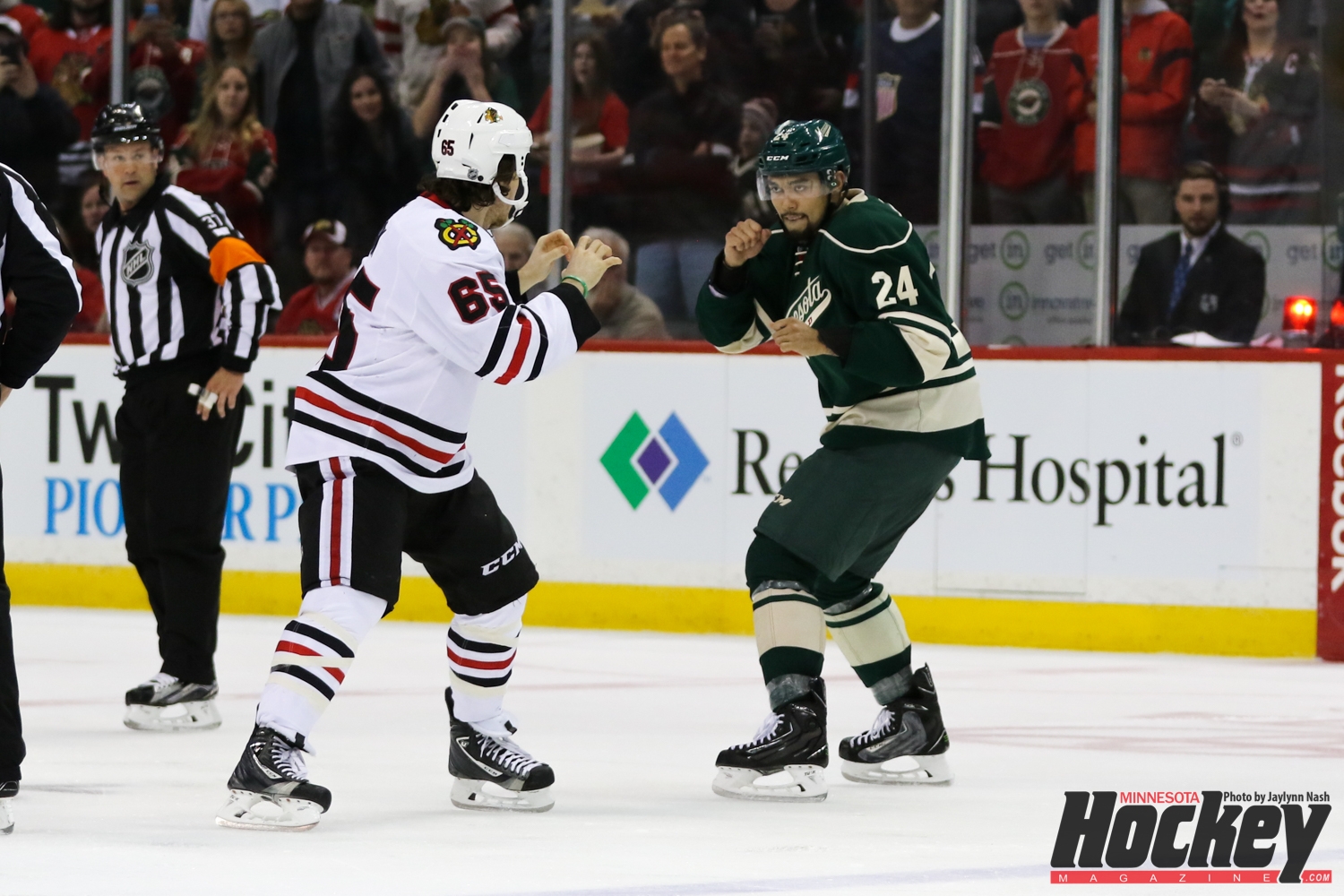 Historic sweep of Chicago puts Wild on the verge of playoffs

St. Paul — Minnesota entered the 2015-16 season on the heels of being swept out of the second round of last spring’s Stanley Cup Playoffs by the Chicago Blackhawks.

While the Wild have a long way to go to avenge that drubbing, they did manage to make a bit of history against their Windy City rivals on Tuesday night.

With a 4-1 win over the Blackhawks at Xcel Energy Center, Minnesota completed a five-game season sweep of Chicago. The Wild became the first team to win every game against the Blackhawks in a season series of at least five games since 1938-39 when the Boston Bruins beat them eight times.

“Getting that against a team like they are, it’s good for confidence and moving forward,” Minnesota captain Mikko Koivu said. “But there’s a lot of things that we need to prove as a team.”

Minnesota now has a seven-game regular-season win streak versus Chicago dating back to Feb. 3, 2015 making it the second longest such streak all-time against the Blackhawks. In addition, the Wild is 8-3-1 in its last 12 games against the Hawks at Xcel Energy Center.

Minnesota coach John Torchetti, who won a Stanley Cup in 2010 at the end of his tenure (2007-2010) as an assistant coach with the Blackhawks said the sweep is great but when it counts for his players is the playoffs.

“They’ve played them umpteeninth times, plus the three years in the playoffs, Torchetti said. “We should know how to play them. Now if we get a chance and are fortunate enough to make the playoffs, that’s got to be our marker.”

With the score knotted at 1-1 entering the final period, goals by Jared Spurgeon, Erik Haula and Nino Niederreiter spurred Minnesota to its season-best sixth straight win.

The line of Haula, Niederreiter and Jason Pominville not only kept Wild nemesis Patrick Kane off the score sheet, the trio added a two goals and a pair of assists on the night.

Coupled with Colorado’s 3-1 loss to St. Louis on Tuesday, the Wild hold a five-point lead over the Avalanche for the West’s final wild card spot with just five games remaining. The playoffs become more of a reality with each passing day.

Wild defenseman Matt Dumba, who fought Chicago’s Andrew Shaw in the second period, said the team’s recent upswing is simply a matter of the the players saying enough is enough.

“We were sick of losing games to probably teams we shouldn’t and ended up beating the ones that were higher up in the standings that we knew we could,” he said.

On Tuesday Minnesota took advantage of a depleted Chicago defensive corps which it wore down as the game went on.

Already without defenseman Brent Seabrook who was a late scratch due to illness, Chicago lost fellow blueliner Duncan Keith just 9:27 into the contest. The All-Star was assessed a match penalty for intent to injure when he swung his stick at the face of Minnesota’s Charlie Coyle, leaving the Wild winger with a cut across the bridge of his nose.

Torchetti was asked if Coyle’s nose was broken but the coach said he didn’t know.

“I didn’t really ask him,” Torchetti said. “He was back in there, so I just went, ‘How’d it go, Chuckie?’ and then I tried to double-shift him because that’s how it is. Sometimes that guy gets hot. I know he was still a little ticked off, and that’s what it’s all about.”

The remaining 50:33 marked the first time since the 2005-06 seasons the Hawks played without either defenseman in the lineup. Blackhawks captain Jonathan Toews admitted playing without the blueline stalwarts wasn’t easy but liked his team’s response overall.

“We did a good job of recognizing the fact that we were short-staffed defensively,” Blackhawks captain Jonathan Toews said. “I think for the most part we played pretty well defensively. We just got caught and gave up those rush chances.”

The Wild’s rushes began with defenseman Mike Reilly hitting Stoll in stride at the Chicago line and the big center did the rest in scoring his fourth goal of the season and third in a Wild sweater.

“I don’t think their forward was really in a position for Stolly,” Reilly said. “I looked up and just saw him flying up on the far blue line and he made a great shot.”

But it was Chicago which later made the most of the five-minute power play the Wild received from Keith’s penalty as Marian Hossa finished a pretty 2-on-1 break with Toews with this 13th goal of the season.

Hossa’s goal is No. 499 of his career, 14 of which have come in his 36 games against the Wild while Toews notched assist No. 20 in his 32nd all-time game opposing Minnesota.

Torchetti says he’s happy for his players and is enjoying watching his team being rewarded for its effort.