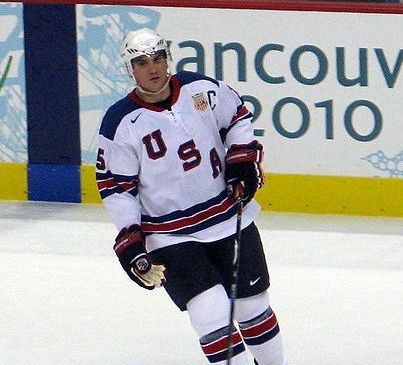 An Interview with Jamie Langenbrunner … 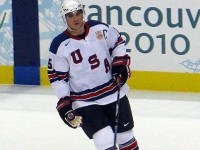 Featured Image:
Jamie Langenbrunner during a break during the preliminary game against Canada during the 2010 Winter Olympics. (Photo: Rosie Perera)

When Jamie Langenbrunner looked across the outdoor ice of Washington Elementary school in Cloquet, Minnesota as a kid and saw the lights of his family home flickering in the distance, he knew it was time to take off his skates and head home. It has been many years since his days of organizing shinny games on the westernmost edge of Minnesota’s Iron Range, but the lights of home are once again flickering for the hockey player, bringing him back to the deep quiet nights of the “Wood City of the North,” as he officially retires from the National Hockey League.

On the eve of his retirement from a career that spanned nearly twenty years and included time with the Dallas Stars where he won a Stanley Cup, the New Jersey Devils and the St. Louis Blues, Langenbrunner took some time to discuss growing up Minnesota, winning the Stanley Cup and everything in between with not just another Minnesota kid, but me, a little girl who grew up in the very same city as he did, and skated the very same sheets of ice he learned on.

Q: First things first Jamie, now that your retirement is official how do you feel?

A: It’s a little bittersweet. It’s tough walking away and being officially done with something that you’ve been doing for nearly seventeen years. I’ve been playing hockey since I was five so to admit it’s over is difficult but I’m excited for the next chapter and being able to spend time with my kids and coach them and to get those other rewarding experiences…but it’s been a lot of fun.

Q: You grew up in Cloquet, Minnesota which is a pretty small town. Do you have any fond hockey memories from growing up in Northern Minnesota?

A: I have lots of great memories and I’m actually back here right now with my kids so I’m kind of reliving them a bit! I grew up next to Washington school which had a rink there and I’d walk across the field to skate there as a kid. I’d see my parents’ bedroom lights from the rink and when they started flickering that light it was time to come home. I was pretty fortunate to grow up during a time when our peewee and bantam teams were very competitive throughout the state and I got to play with some of my best friends in Rick Mrozik who went on to play a few games in the NHL and Adam Pavlatos and Kyle Young and guys that I grew up with and was able to play hockey with from the time I was little through high school.

Q: Is it weird for you at all being in Cloquet with how much people look up to you or is it just home?

A: I’ve never felt weird here. It’s always been home to me and I’ve always come back here in the summer. Most of my friends I grew up with are still around so it’s just home to me. They have the banners and such in the rink and I definitely feel special with that but I always look at the guys before me with Corey Millen and Derek Plante and those guys and they are the ones I’m always excited about so for me it’s not a big deal but I’m definitely honored by the nice things people say.

Q: You seem to have the reputation of being a solid leader in the NHL and beyond and have worn a C for multiple squads; do you attribute your leadership abilities to anyone or anything specifically?

A: I think part of it is that I’ve always just kind of been that way, even as a kid. I was the kid trying to arrange the games, as my mom would say. I would be calling all of my buddies making sure we had people from around town to get a game going and doing those kinds of things.

As far as the captaincy thing is concerned, in the NHL I was very fortunate early on in my career to be around some guys who I consider to be great leaders in Joe Nieuwendyk, Guy Carbonneau and Craig Ludwig. The teams I was on in my career also had some great guys I was around who either were captains or had been captains of teams. To see the way they conducted themselves and the way they treated people I was able to really learn firsthand how to do it at that level. I think leadership comes naturally though and you kind of feel comfortable in that role.

Q: Speaking of one of the teams you Captained, what was it like representing the US in the Olympics in 1998 and 2010?

A: Amazing would be the first word. I dreamed of being an NHL hockey player but the Olympics were definitely something that we all looked at and strived for and something I thought had gone away when I turned pro in 94’. Then the opportunity came up in 98’ when they brought the NHL guys in and it was amazing. Being named Captain for the 2010 team and being able to represent not only the country but my town and my team on the biggest stage, and for us to do well was probably the greatest individual honor I was given in my career.

Q: What was more flooring, winning the Stanley Cup or winning a silver medal at the 2010 Olympics?

A: Well if it had been a gold medal we might have a conversation! I think they are really two different things. To win the Stanley Cup, I mean you’re going through a season with a team. In Dallas we made a few trades at the deadline and added another Cloquet guy with Derek Plante and whatnot but you’re basically going through with a team for a six month battle and then a two month war with the playoffs, so you have a bond with those guys that’s pretty deep. You’ve spent more time with them then you’ve spent with your family by the time it’s over and it’s a really pretty amazing thing to go through.

The Olympics, especially with the way it’s set up as a two week long tournament is definitely different. It was a great experience since our group came together so well and we really bonded in a short time though. We had a lot of fun together but I think they are two completely different experiences although the world stage makes it so amazing especially with the country behind you. Hearing those stories back home from people who can tell you where they were while they were watching this game or that game is neat stuff and makes you feel pretty special to be a part of that.

Q: You recently spent some time with your most recent team, the St. Louis Blues, while they were visiting Minnesota. What was that day like for you?

A: I’m kind of regrouping a little bit. I’ve actually been talking with the St. Louis management a bit about starting to do something with them. I’m just trying to find the right fit for me with the idea that I still want to have some flexibility to be around for my boys and stuff so we’re having ongoing conversations. Hopefully we find something that works for all parties involved and kind of slowly transition into something else. I’m not in a rush to do anything and it’s nice to have that luxury, so for now we’ll kind of wait and see what happens.

For more information on Jamie Langenbrunner and his career CLICK HERE for the NHLPA media release. You can follow Cloquet, MN native and the author of this article Amy Gist at @AmySnow17 as well as @MNhockeyMag for all of our latest updates, articles and events!