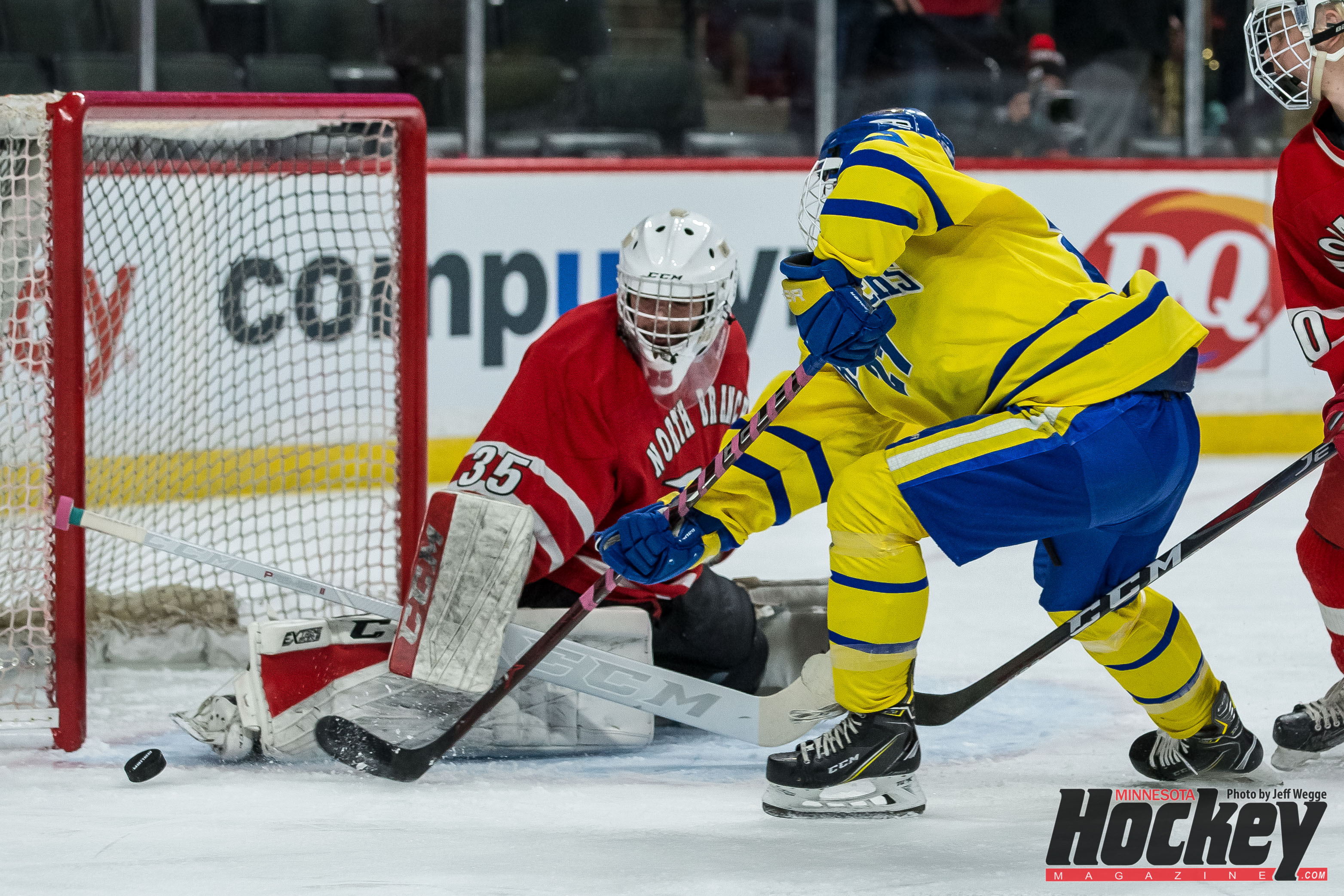 The No. 2 St. Cloud Cathedral Crusaders cruised to a 7-0 victory over the North Branch Vikings in the quarterfinal round at Class A State Tournament.

It took them awhile to get things going, but once Jackson Savoie’s unorthodox goal found the back of the net, the Crusaders never looked back.

Savoie, who was positioned behind his own goal line, shot the puck of the back of the goaltender’s leg and the puck trickled in to give the Crusaders the 1-0 lead.

“I just wanted to crash the net,” said Savoie. “Because you know in the beginning of the game you’re not quite settled in yet. So luckily getting shots on net and luckily it bounced off his leg and I was pretty much behind the goal line. So we got lucky on that one.”

Savoie was born in Minnesota but spent time living and playing in Jacksonville, Florida before moving back to Minnesota when he was in tenth grade and his family still lives in the south. Meanwhile, Savoie lives with his Grandmother and this is his second State Tournament appearance.

“In my sophomore year, I had the ability to play third line in the tourney with these guys so that was really cool. It’s really fun to be here playing for a high school instead of traveling all around Florida.”

“Couple of them know about The Tourney because my sister and family still live back in Florida. I live up here with my Grandma. So they kind of talk about it and know how kind of a big deal it is up here for that.”

The Crusaders poured it on in the second period with five goals in the frame, which included a hat-trick from junior Nate Warner. All three of Warner’s goals came within ten minutes of each other, including a short-handed tally.

Jack Smith and Luke Schmidt also scored for the Crusaders.

“That short-handed goal kind of took over a little bit,” said Cottingham. “Instead of focusing on the next play and the next face off.”

The Vikings surprisingly held a 10-9 shot advantage after the first period and trailed 1-0. However, the Vikings were only able to put on six goals over the next two periods as St. Cloud ended up outshooting them 36-5 the rest of the way.

With the win, St. Cloud Cathedral moves onto the semifinals and will face the winner of Minnesota River vs. East Grand Forks.