Center might not be the only position Bill Guerin seeks to upgrade at the trade deadline. 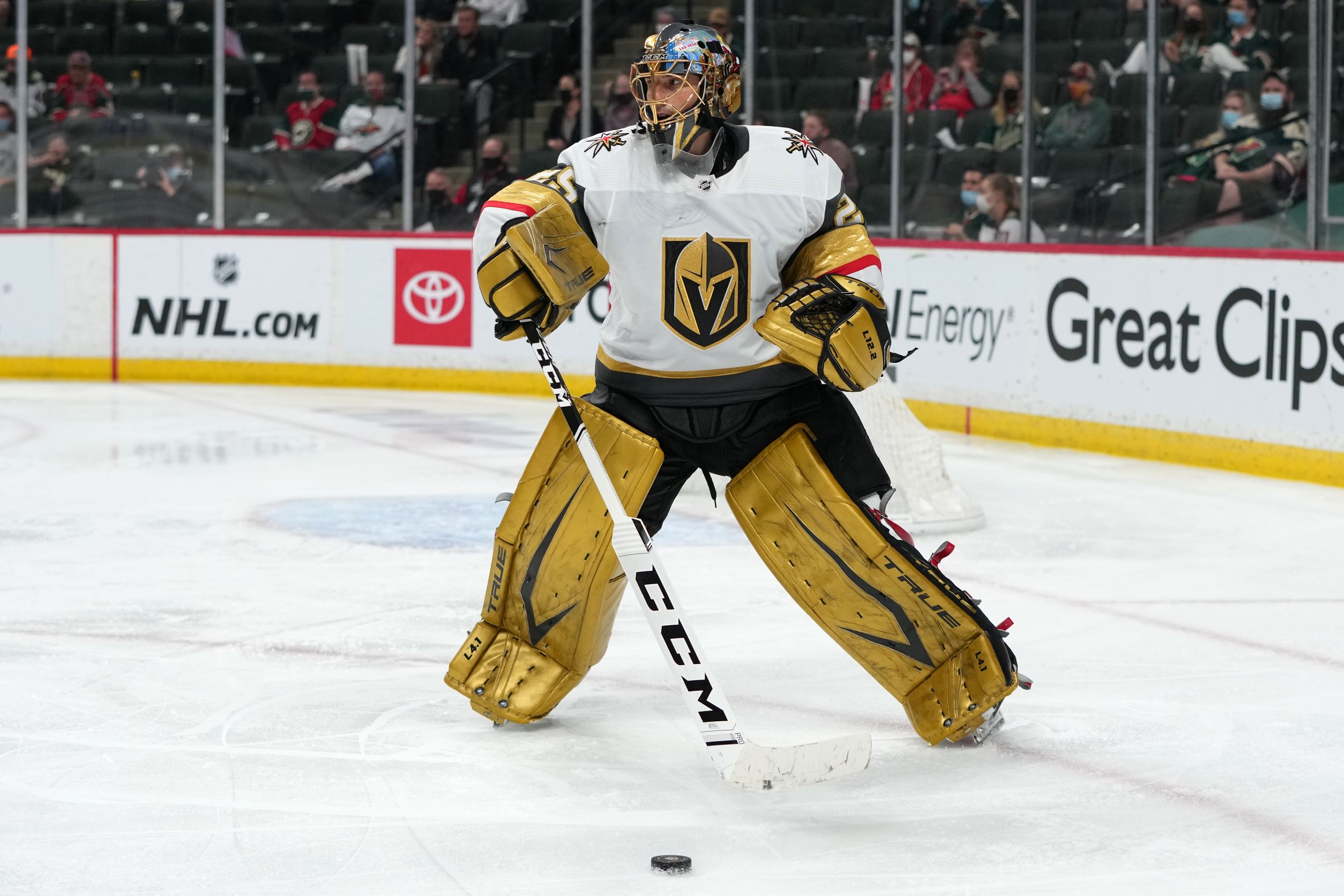 The Wild’s success this season has led to optimism that general manager Bill Guerin will make a significant deal to strengthen his team before the NHL trade deadline arrives one month from Monday. The primary discussion has focused on the center position and the potential of adding a guy like J.T. Miller, Joe Pavelski, Tomas Hertl or Claude Giroux.

But has this fixation caused us to overlook what privately might be a bigger concern for Guerin and coach Dean Evason? That would be the goaltending position where Cam Talbot and Kaapo Kahkonen had been rotating of late. There is no doubt, however, that Talbot is seen as the Wild’s top goalie and the guy who would be expected to start in the playoffs.

The Wild haven’t had many missteps but a two-game skid last week at Winnipeg (6-3) on Wednesday and at home against Florida (6-2) on Friday provided cause to ponder Minnesota’s goaltending situation. Evason went away from the rotation and gave Talbot both starts. He stopped 25 of 30 shots against the Jets, and gave up four goals on 34 shots versus the Panthers as Minnesota also surrendered two empty-net goals.

Was Talbot solely to blame for the defeats? No. Did the 34-year-old make the saves a team needs when the pressure is on? Also, no. This would qualify as a small sample size, if it were focusing on only two games. But that’s not the case. 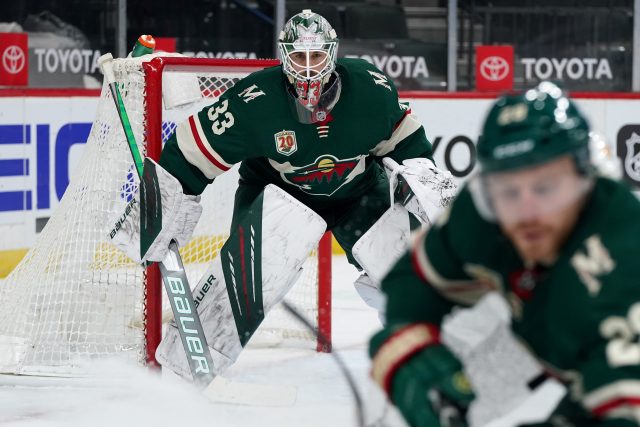 Questions remain as to whether the Wild can ride Cam Talbot deep into the playoffs. (MHM Photo / Rick Olson)

Talbot is ranked 32nd in the NHL in goals-against average (2.91 in 30 games) and 25th in saves percentage (.911). The advanced metrics also haven’t been kind. Talbot has a 1.80 goals saved above average (GSAA) in all situations to rank 16th among 26 goaltenders who have played at least 1,500 minutes this season. He is 22nd among the same 26 goalies in high-danger save percentage (.812). Last season, Talbot ranked 10th in GSAA (6.82) and 12th in high-danger save percentage.

Guerin and Evason have gone out of the way to talk about how well Talbot has performed and to point out that he has made big stops at crucial moments. Asked about Talbot’s disappointing goals saved above average for a recent ESPN story on his team, Guerin said: “I disagree with the numbers then. We’re getting saves at key moments in the game. Both our goalies have been awesome.”

So have quotes like this resulted in many, including me, ignoring something that should  be a concern?

Guerin can’t be blamed for avoiding criticism of Talbot, but he also knows he has a team that is having a special season and is facing salary cap issues in the three years ahead. The last thing Guerin, or Evason, want is for an opposing goalie to stand on his head in the first round and Talbot not be able to answer that type of performance.

Kaakonen, who entered Sunday’s game in Edmonton tied for 10th in the NHL in saves percentage (.921 in 18 games) and 15th in goals against average (2.53), has had hot stretches in both his first two seasons but consistency was an issue in 2020-21 and it seems unlikely the Wild would feel comfortable riding Kaakonen in the postseason.

That also would be a big gamble given that many expect the Wild can win a first-round series — something the franchise hasn’t done since 2015 — and compete with Western Conference power Colorado in a subsequent round.

One potential option on the trade market would be veteran Marc-Andre Fleury from Central-division rival Chicago. The Blackhawks are going nowhere and the 37-year-old known as the Flower is in the final season of his contract. Fleury can submit a 10-team no-trade list to Chicago, but Minnesota seems like it would be a good landing spot for a few months. 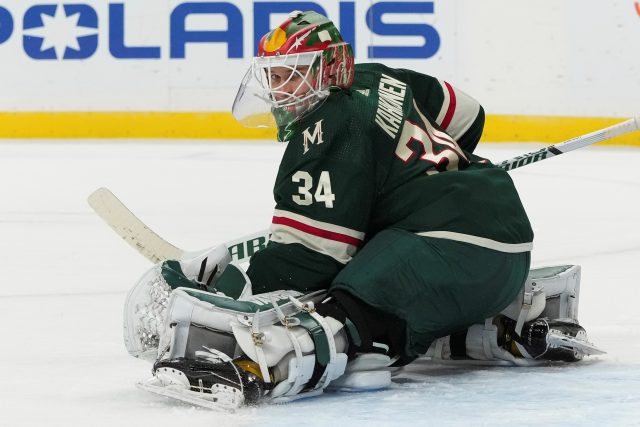 Fleury hasn’t had a great season after being traded by Vegas last summer — his .912 saves percentage ranks 23rd in the league and his 2.80 goals-against average is 27th — but he’s playing for a struggling team that entered Sunday a minus-47 in goal differential. That’s among the worst in the league.

Fleury, who this season became only the third goalie in NHL history to record 500 career wins, knows all about playoff pressure having won three Stanley Cups with the Penguins and helping the Golden Knights to the Finals in that franchise’s first season. Guerin also spent time with Fleury in Pittsburgh, first as a player in 2009 and then as an executive with the Penguins.

In the Golden Knights’ first round win over the Wild last season, Fleury started all seven games, had a .931 saves percentage and stopped all 35 shots in a Game 4 victory. The Wild’s desire to get Fleury would be twofold, given one of his other potential suitors could be the Avalanche. Colorado could pair starting goalie Darcy Kuemper with Fleury, giving them security if Kuemper is injured or struggles.

The one thing that wouldn’t be a concern is how Fleury would be received in the Wild’s locker room and whether the team’s chemistry would be upset. Fleury is one of the NHL’s most popular players and his Hall of Fame resume would give him immediate credibility. The question is what would Chicago ask for in return? The fact that a few teams certainly would be interested in Fleury — the Edmonton, Pittsburgh and Washington come to mind — could drive the price up but Fleury’s age and the fact he’s a rental means no team would pay an enormous sum for him.

The Wild likely would offer Kahkonen and a high draft pick or a prospect (not Matthew Boldy, Marco Rossi or Jesper Wallstedt) in return, if they pursued him. This also will be the last season for a while in which the Wild can absorb salary cap space without it being an issue. The team’s cap space at the trade deadline is set to be $11.8 million, and Fleury’s cap hit for the entire season is $7 million. If ever there was a time to pursue a deep playoff run, this is going to be it.

Of course, if Guerin and Evason are really as happy with the Wild’s goaltending as they say, the focus might continue to be on acquiring a center. If they aren’t, don’t be surprised if they decide to go Flower shopping before the deadline arrives.