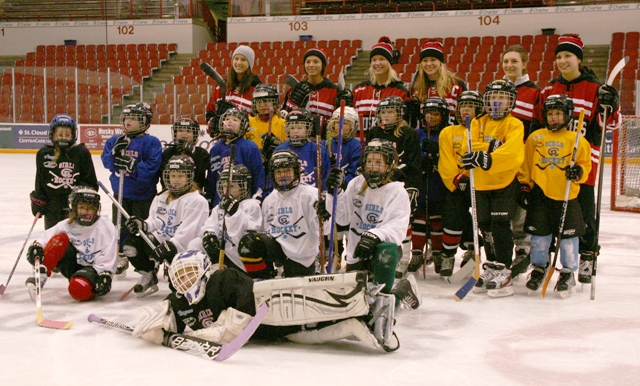 Called the State of Hockey, some might be surprised to learn that parts of Minnesota haven’t always been hockey-crazed.

For example, greater St. Cloud, a community of about 80,000 in Central Minnesota, didn’t even have an indoor ice arena until November 1972. Now there are six indoor sheets and more kids playing than ever before, but growth and retention didn’t come easy, and it still doesn’t, even in this rather large Minnesota city. Fortunately, parents and volunteers from the St. Cloud Youth Hockey Association are all-in. Their concerted effort to make youth hockey more inclusive and more fun is paying dividends.

“We’ve been proactive,” said Mike Petroske, president of the SCYHA. “We were early adopters of the American Development Model, and even before USA Hockey formally introduced the ADM, we were playing cross-ice hockey.”

In the early days, acceptance wasn’t universal. When the SCYHA adopted station-based youth practices, some parents grumbled, but most of those dissenters quickly became advocates. A new mite program built on fun and frequent puck-touches proved especially persuasive.

“We created a fun atmosphere with a Saturday-morning in-house mite concept with four teams of 10 which played half-ice games against each other for six weeks,” said Petroske. “We had two games happening at once, each team playing in the jerseys of four college teams. It was a carnival atmosphere. We’d announce goal-scorers over the public address system and really build it up. That’s when we got people to start buying in.”

The program began as a free offering, which helped encourage parents, and when the SCYHA offered it for a second time, enrollment maxed out in minutes. Now the initial graduates of the program are ascending the ranks and impressing observers.

“Last year, our squirts were really strong and I credit it largely to adopting the ADM,” said Petroske. “And since we launched that in-house mite program, we’ve had almost no complaints.”

Jaime O’Hara, SCYHA mite coordinator, joined the association in 2011 and looked to amplify the fun factor. It was her son’s second year of organized hockey.

“It is not about getting the players to perfect every station, have the perfect stride, the perfect shot, et cetera,” she said. “It’s about fun, period. Adopting the ADM added to the fun factor, and not just for the players and the coaches, but also for me as the coordinator. It’s an easy job with the ADM plans, so I get to have more fun and enjoy watching the kids’ enjoyment at the rink. The players doing the stations don’t realize the skills they are learning. They just think they are on the ice playing games with the coaches, when all the while, they’re improving skating skills, puck handling, building muscles, and listening and working together – to have fun.”

O’Hara also credits the coaches for being eager and excited about the ADM mission.

“It’s been more fun and enjoyable for them too, because everything is drawn up for them, there is no planning, scheduling or drawing up practices,” she said. “The ADM practice plans are printed and labeled with practice dates. Coaches get to the rink, grab the tools they need for the practice, and it’s easy as that. Then they have more time to learn who players are and pump up the excitement about practice.”

“In Minnesota, with the changing seasons, there are so many athletic choices for kids, so most of the parents have seen practices from several different sports,” explained O’Hara. “But when they watch their first hockey practice with us, they can’t believe how well-organized it is and how well the time is managed. They love the eagerness and excitement the players show about going to practice, and they love that their kids burn a lot of energy while on the ice and then rest well after a practice.”

Bring on the Girls 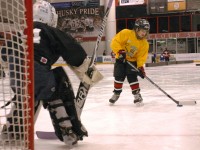 Recognizing an opportunity, the SCYHA launched a new girls-only version of the introductory mite program this past Saturday. They hope it causes an enrollment increase similar to what occurred in the boys ranks, which would further strengthen the association’s growing foundation of young talent.

Saturday’s festivities began with a station-based practice led by members of the St. Cloud State University women’s hockey team. Afterward, the girls received a guided tour of the Huskies’ locker room followed by a feast of donuts, juice and yogurt. Needless to say, they were all smiles, which is truly the secret sauce in St. Cloud’s recent success.

“Our association growth, both for girls and boys players, has come naturally, from kids and parents talking to friends and other parents,” said O’Hara. “They can’t help but mention the fun time they had at hockey. And really, don’t we all want to be involved in fun?”

It may be a simple philosophy for growth, but it’s also undeniably effective.

“Our players have such energy when they talk about the good times they’re having at the rink,” said O’Hara.

“And the love of the game all starts by having fun first.”