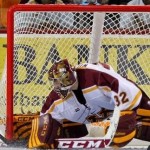 They’re a familiar face though conference realignment has split them apart. Although the Minnesota State Mavericks and Minnesota Golden Gophers are no longer conference foes, that doesn’t mean the intensity of the in-state rivalry is lost.

“It’s always a great game,” said Mike Hastings. “There’s no question about that.”

And for a team that calls themselves “Minnesota’s Pride on Ice” Hastings said, even without conference points, the importance of Friday night’s game, and the weekend series, isn’t lost on the boys in black and purple.

“You always get excited to come and play here, especially as a fellow Minnesota Division I team,” said Hastings. “We’re going to have to go back to the drawing board because knowing Minnesota they’re going to go back and make some changes and step up even more tomorrow night. They’re going to be excited about defending their home ice.”

And they will be looking for the sweep as the No. 1 ranked Gophers walked away with the game Friday night, handing Mavericks a 4-1 loss.

Justin Kloos, Mike Reilly, Connor Reilly and Seth Ambroz accounted for the four Minnesota goals. Kloos and Mike Reilly recording first period tallies for a 2-0 lead, with Connor getting Minnesota’s only power-play goal on the night in the second period.

But Palmquist scored on Minnesota goalie Adam Wilcox to ruin his shutout on the night with little less than seven minutes remaining in the game but Ambroz netted the final tally sans goalie to hold on for the 4-1 win.

Minnesota State is the first Minnesota team to visit Mariucci Arena this season. Minnesota will reunite with the Mavericks, along with Minnesota-Duluth and St. Cloud State, Friday and Saturday, Jan. 24-25, at Xcel Energy Center for the inaugural North Star College Cup with a chance to face each other on Saturday.

Other game notes: Justin Kloos remains red hot for the Gophers. The freshman notched the first goal of the game to get Minnesota on the board with just under 10 minutes to play in the opening period. The tally was Kloos’ fourth of the young season.

“I think Nate has been a huge asset,” said Lucia. “He is able to see those plays, like Reilly cutting … he can just see those plays and that’s what we like to see.”

Talk about brotherly love: Mike and Connor Reilly each grabbed a goal in Friday’s win. Mike ripped one in the first for a 2-0 lead while Connor got the Gophers third goal on the power play with a one-timer to the corner. An extra tidbit, the goal marked the first time two of the Reilly brothers have been involved on the same goal (remember there are three total, with Connor’s twin Ryan also a redshirt freshman). It was also the first time Gopher brothers combined for a score since Ryan and Grant Potulny in 2004.

“Yeah it was awesome,” said Mike, who tacked on a goal earlier in the night for two points Friday. “It kind of reminds me of growing up being out on the ice. It was pretty special.”

Packer pride was on display when Palmquist slipped it past Wilcox for the Mavericks’ lone goal.

Both players are South St. Paul alums, familiar with one another. “I didn’t really get to say anything to him yet,” said Palmquist with a grin. “I’ll probably shoot him a text tonight, give him a little bit of crap.”

Wilcox’s response to his former teammate one-upping him:  “Yeah you kind of just laugh it off, joke after the game. It’s nice to get the win.”