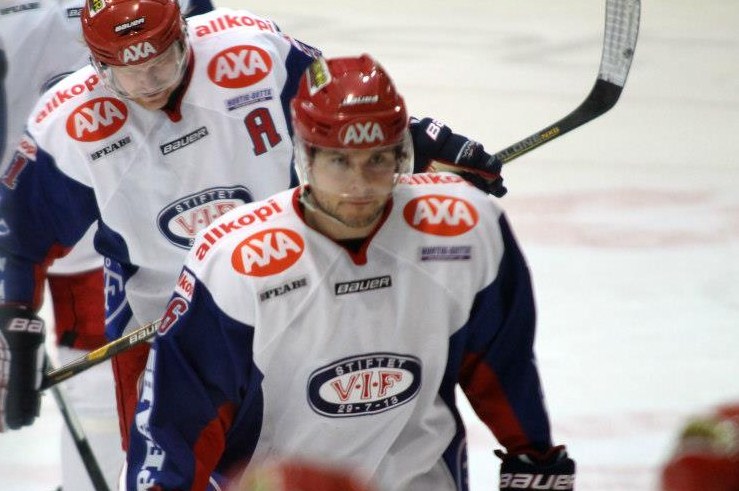 More and more North American hockey players are packing up their hockey gear in pursuit of a professional career and new life experiences in other countries.

Former Gopher and Minnesota high school star, R.J. Anderson, is a player who has chosen the path of European professional hockey.

R.J. Anderson grew up playing his youth hockey in his hometown of Lino Lakes, Minnesota. After winning state titles as a pewee and bantam, Anderson and his teammates enjoyed the same success in high school by winning the 2004 Minnesota State High School Championship. Considered one of the greatest high school teams of all-time, the Cougars had a remarkable season going 30-1 while out scoring their opponents by an astonishing margin of 255-33 and becoming the only team ever to register three shut outs in three state tournament games. Individually as a defensemen, Anderson also had a magical junior season registering 85 points in just 31 games and leading the entire state in assists with 56.

Passing up the opportunity to play the 2004-2005 season in the USHL, Anderson came back his senior year for a shot at winning back to back state titles. The Cougars had another great season, but fell short of winning that state championship. Nonetheless Anderson still impressed. He was named to his second consecutive All-State Team, Star Tribune Metro Player of the Year and Mr. Hockey Award finalist his senior year. Additionally, he was a fourth round draft choice of the Philadelphia Flyers.

Before pursuing the dream of professional hockey, Anderson fulfilled another dream of wearing the Maroon and Gold. He played four seasons at the University of Minnesota where he helped lead the team to become WCHA Champions in 2006 and 2007 and three NCAA playoff appearances.

After his four seasons with the Gophers, Anderson played with various teams in the AHL and the ECHL before finding his path to play in Europe. On May 27, 2011 he signed a contract with the Lillehammer IK of the Norwegian Elite League joining former Gopher teammates Justin Bostrom, Kevin Wehrs and Gino Guyer.

“It made it easier because two of my three past [Gopher] teammates had played the prior season before so I had a good idea of what was going to happen before I went over there,” Anderson states, “Norway is a lot like Minnesota in a way because it is such a Scandinavian influence there. It reminds me a lot of the North Shore in Duluth.”

Anderson proved he could still put up impressive numbers in another country. In 45 games he captured the scoring title for defensemen by registering the most goals, 19, and the most points, 53, of any defensemen in the league.

“It’s a great honor winning an award like that, but a lot of the credit goes to the guys who were around me,” he remarks, “Them making me feel comfortable and putting me in a position to be successful because without that I probably wouldn’t have had the year that I did.”

On July 9th, 2012, Anderson signed a contract with the Malmo Redhawks of the Swedish second-tier league. Playing in 29 games with the team, he registered 10 points (5g, 5a).

“I felt [Sweden] was a good opportunity for me because it was a better league and a lot of doors can open up.”

Signing with Sweden gave Anderson another stamp on the soon to be full passport.

But coming into a new country and a new culture isn’t always easy.

“The biggest challenge in Sweden was being the only import. Figuring out who I was going to hang out with and the different groups and finding guys with common interests because you are half a world apart and a lot of things are different.”

In midseason he was traded back to Norway where he had tremendous success a year earlier. Signing with the Oslo based Valerenga hockey team Anderson finished out the season. He again dominated as he led his team to the league championship. In the playoffs the team was runner up with Anderson leading all defensemen for the league in points and +/-.

One thing Anderson loved about Norway was the off ice camaraderie. He and his teammates enjoyed a lot of team bonding experiences such as skiing in the Norwegian Alps, playing paintball and going out for team dinners.

A funny tradition that is done in the Norway GET-league involves a game of “odd man out.” The leading scorer for each team wears a gold helmet the entire game so the other team can see who it may be. For some teams it is the same player all year long and others the helmet jumps around a bit. Anderson had the honor of wearing the illustrious gold helmet.

“It caught me off guard because it ended up being in my stall a few times. It’s pretty funny. I had to wear it, that’s the way it goes,” he shares with the laugh.

It doesn’t take much for the fans in Europe to get going. Fans are constantly doing cheers and waving flags the entire time; from warm ups to the end of the game.

“Here in North America you don’t see that as much. Fans are a little more quiet unless someone scores a goal; there is a fight or a big hit.”

The fans in Europe have so much passion for their sport teams; it is second to none.

“It’s pretty cool because a lot of the cities there kind of live and die by how their hockey and soccer teams do.”

“I still don’t know the language very well,” Anderson states with a laugh. “The Norwegians learn English at a very young age. English will get you farther than trying to learn their native language because some of those languages [in Europe] are hard to learn and speak. It’s funny because when they learn it, they learn proper English so sometimes it sounds like Shakespeare. They don’t understand our lingo a lot of the time.”

The food in Europe is another big change. Moose meat, oxen meat and horse meat, not something a North American may be used to.

“You have to keep an open mind about it,” he shares.

Traveling overseas to play has not only opened Anderson’s eyes about the game of hockey, but also about the passion of the sport in Europe. With Sweden being as small as it is and having won the Olympics, World Junior Championships and World Championships, that really made him think about the history of the sport in that country.

R.J. Anderson has shown that moving to a new country to pursue a dream of hockey and travel may not always be easy, but it is a once in a lifetime experience that he will never forget.

“Overall, it’s been a great experience and I am looking forward to going back for a third year. And to see what else I get to encounter and broaden my horizon a little more. ”