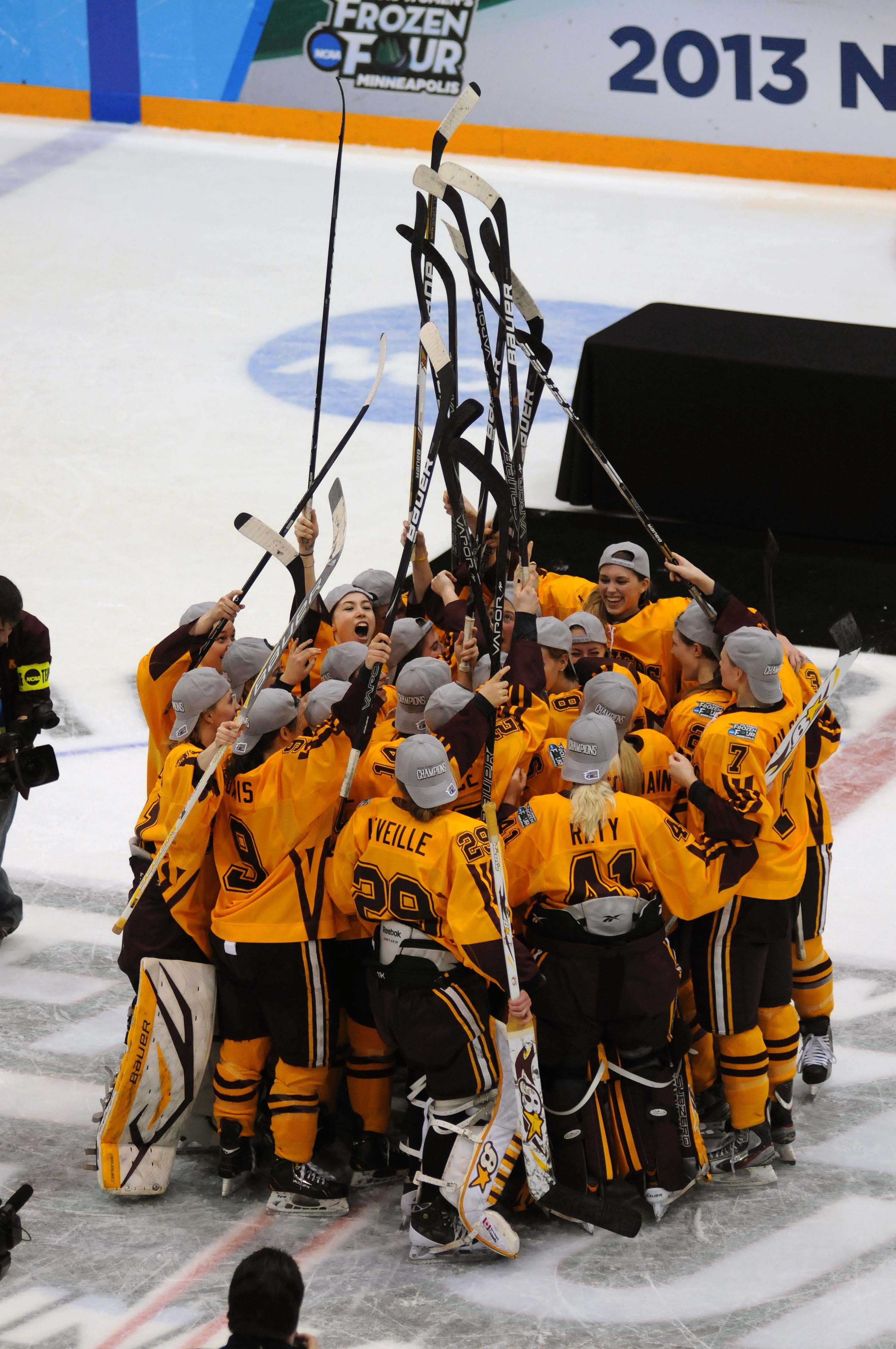 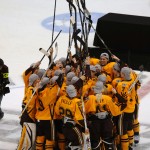 Featured Image: 41-0-0 Minnesota is a team in the truest sense of the word. (Photo by Jordan Doffing)

It’s easy to rave about the Gopher women’s hockey team and review the countless records, statistics and honors that have piled up for them this season. If you did a simple Google search on the team right now, you would find reading material to keep you occupied for days.

There is no question that this team is special and, to be fair, you could make that argument about any team that wins a National Championship. However, this Gopher team is in a category all their own and, believe it or not, they are poised to keep it going.

Head Coach Brad Frost, 2013’s ACHA Division I Women’s Coach of the Year, isn’t denying that he has some pretty special players on his team, but he is quick to point out there is more than meets the eye when it comes to his squad. During remarks following the national semifinal overtime victory over Boston College, Frost led with a discussion about the character of his team.

“The team found a way, as they have all year,” Frost boasted. “I’m really, really proud of them and it’s a big night for our program.”

He talked about his players, his staff and his program as a united group and not individuals.

He was quick to point out that they played three lines consistently all season, knowing that anyone, at any time, could get the job done.

“From day one we’ve been talking about how the depth of our team is our biggest strength,” Frost said on Friday. “I don’t know how many coaches would send their third line over the boards in overtime, at least early on.

“I’ve got all the confidence in the world in all of our lines and all of our kids.”

The players agreed. In their interviews, they joked about games at practice and drawing fake play-off beards to mimic their beloved coach. When asked about specific plays, they were quick to shift attention to their teammates and their commitment to a common goal.

Even when goaltender Noora Räty was asked her feelings on earning her second straight Frozen Four Most Valuable Player Award the honor was secondary in her mind.

“Well, it feels way better to be ‘natty’ champ than be MVP,” said Räty. “I feel like everyone on this team deserves this award and that none of us are concerned about the number on our back.”

There is no avoiding the talent that this Gopher team has. However, talent only gets you so far and talent alone certainly doesn’t sustain a 41-0-0 record in NCAA Division I Hockey.

Minnesota possesses every intangible that one could possibly desire in a program from character to work ethic to an uncanny ability to come together at all the right times and play solely for each other.

Not to mention their belief that they truly are a family.

“I can’t believe the effort and family feel that our team has,” Frost said. “At the end of the day, a hockey game is a hockey game and there are many things in life that are much more important.

“This is an incredibly special team and one that will go down in the history books as one of the best ever, if not the best ever.”

The Gophers exemplify every positive cliché in sports and are, in a word, perfect.

Jessica Christopherson is from Coon Rapids, Minnesota. She was a three sport athlete in high school and went on to play soccer and hockey at the University of Saint Thomas, where she received a B.A. In Sociology. She was a four year assistant coach at UST and is currently the Head Coach (3rd season) at Coon Rapids High School, where she was named Section 5 Coach of the Year in 2011. She recently completed her USA Hockey Level 5 Coaching Certification and was also named as a coach on the SportsUnited / USA Hockey Trip to Russia in October 2012.