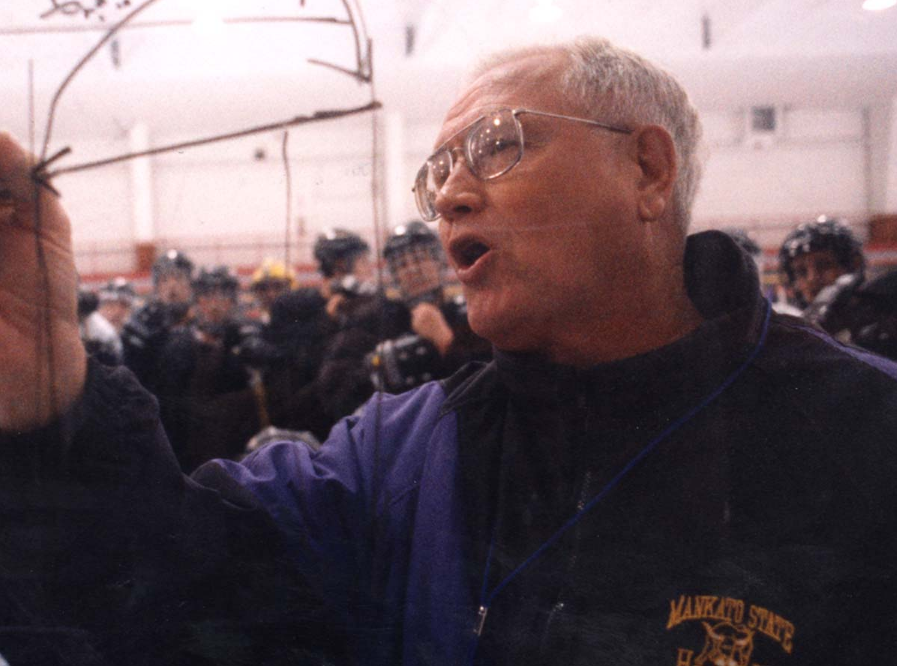 As the final seconds counted down in Minnesota State University’s 4-0 NCAA West Regional final win over the Golden Gophers of Minnesota, giving the Mavericks their first-ever berth in the Frozen Four, the happiest man alive in that moment was cheering among throngs of purple-bleeding fanatics in a Buffalo Wild Wings 800 miles away from the Loveland, Colo. regional site.

Don Brose, the architect of the Minnesota State hockey program, its father who raised it from its outdoor infancy to the pinnacle of Division II and guided it into its current Division I era, proudly witnessed his baby exorcise its postseason demons from a bar in Mankato.

“That game against the Gophers was textbook, the way they took away chances,” Brose said of the Mavericks who advanced in the Division I NCAA Tournament for the first time in seven tries. “I don’t think many people gave us a chance.”

While the balance of college hockey power within Minnesota’s borders has shifted considerably across the decades, the Gophers have long been, and continue to be, the dragon everyone wants to slay, even taking Minnesota Duluth’s massive success in recent years into consideration.

Did that make this win that much sweeter for Brose?

“Very much so because, let’s face it, people tend to look down on our league,” Brose said of the Western Collegiate Hockey Association. “I think that gives a lot of credence to our league so I’m very happy for our league besides being very happy for coach Hastings and our players.”

MSU’s foray into the Frozen Four marks a first for the program but the last for the WCHA as a conference after all members, with the exception of the Alaska schools and Alabama-Huntsville, opted to leave the league for the re-born Central Collegiate Hockey Association (CCHA) under the leadership of former Minnesota coach Don Lucia as its commissioner.

While he would love to see the Mavericks send the league out in a blaze of glory, Brose has mixed feelings on the matter.

“It really makes me ill for what happened to the WCHA, how it broke up,” Brose said. “Because the [John] Mayasiches and the Red Berensons, you know, their historic pride in the league, what they did to build up the league and make it so strong, and now they have nowhere to hang their hat.” 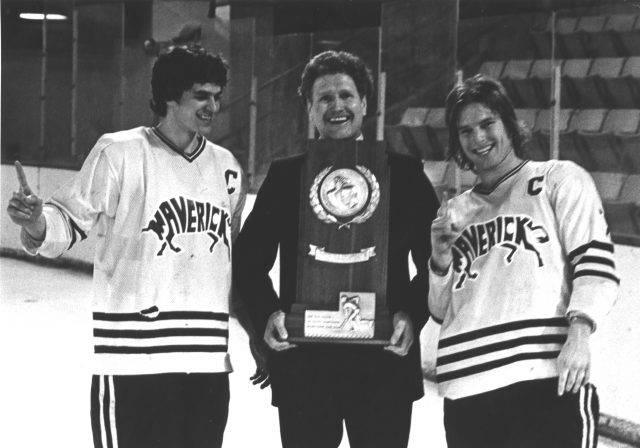 The Mavericks in the Frozen Four is something Brose admitted he never could have imagined as a 29-year-old first-year coach flooding the outdoor rink for his upstart program to play on. Minnesota State was a split campus in those days with most of the athletic facilities located on the upper campus. The Mavericks played on a rink built on the lower campus football field which was already equipped with lights.

Brose was also an assistant baseball coach for nine years at Minnesota State and says it was sometimes colder playing baseball than it was to make ice for hockey.

“You never knew what kind of ice you were going to have,” Brose said. “If All-Seasons Arena wasn’t built, we probably wouldn’t have a program.”

Which would have been a shame considering Brose amassed a 536-335-79 record in his 30 seasons behind the MSU bench, including a Division II national championship to conclude the 1979-80 season. Brose would later steer the Mavericks into Division I in 1996, leading them through three seasons as an independent before making Minnesota State’s first season as a member for the WCHA (1999-00) his last behind the MSU bench.

The Mavericks, obviously, never trailed the Gophers in Loveland but history would not allow Brose to take anything for granted until the game’s latter stages.

“Well, I tell you what, I hated to play with a two-goal lead again,” Brose said. “When they got ahead two to zero, in the back of my mind, I thought, ‘Are we going through this again?’”

Brose can be forgiven for the fact it was actually a three-goal cushion barely 11 minutes into the game that got away from the Mavericks in 2019 before allowing six unanswered goals to Providence in their most recent NCAA tournament appearance.

Only most recent, though, because Minnesota State, like every other program in the country, had its NCAA postseason dreams dashed when the 2020 COVID-19 outbreak forced the NCAA to cancel its tournaments. The 2020 Mavericks might have been the program’s strongest ever, going 31-5-2 (.842) through the first round of WCHA tournament play before having the plugged pulled on its season.

As thrilled has Brose is for this year’s team, he can’t help but wonder what could have been.

“It’s sort of bittersweet because last year’s team was just a magnificent team,” Brose said. “To not have them get a chance was very bitter but to see this team make up for it and carry through was very good.”

We’ll never know if the 2020 team, and its gaudy record would have gotten Minnesota State over the hump of its 0-6 record all-time in NCAA Tournament games but the 2021 version, now sitting 22-4-1 (.833), flattened it, despite nearly being one-and-done themselves.

“It didn’t look good for a seventh time either when you get behind,” Brose said.

The Mavericks opened the NCAA West Regional against Quinnipiac and trailed the Bobcats 3-1 deep into the third period. But MSU scored twice in the final six minutes to send the game to overtime where Ryan Sandelin completed the comeback win at the 1:25 mark. 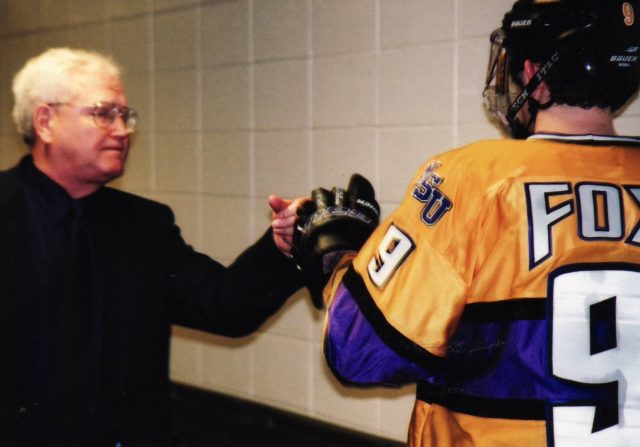 Awaiting the Mavericks in Pittsburgh is St. Cloud State, one of Minnesota State’s oldest rivals going all the way back to the inaugural 1969-70 season. It’s the first NCAA Tournament meeting between the two schools separated by a little more than 100 miles and the Mavericks own a 63-56-13 all-time advantage over the Huskies in Division I and II play.

The matchup could not be more appropriate for Minnesota State’s virgin venture to the Frozen Four.

“That was one team that would play us all the way throughout the years; they gave us a chance our first season,” Brose said. “I look back to all the games we played against (long-time SCSU coach) Charlie Basch. He and I are very close friends. We would get together and play golf in the summer and we’re both Concordia (Minn.) graduates so I look at that a really being neat.”

While Brose passed the Minnesota State coaching torch on long ago, first to his assistant Troy Jutting before Mike Hastings arrived in 2012, he remains close to the program he birthed and believes it could not be in better hands.

“I think he’s the best coach in the United States,” Brose said of Hastings. “I think he can coach anywhere and I’m glad he’s coaching at our place.

“He demands a lot of the kids but he gives a lot back and he’s been a winner everywhere he’s been.”

Brose said he has never watched a practice in his going on 21 years of retirement, but prior to COVID he enjoyed congratulating the coaches and players personally after a win at home and he and Hastings exchange texts after big road wins. He envisions big things ahead for his beloved Mavericks under Hastings.

“I might have been part of setting the blocks, building the foundation for the program, but he is certainly the person that’s putting the skyscrapers on top of that foundation.”