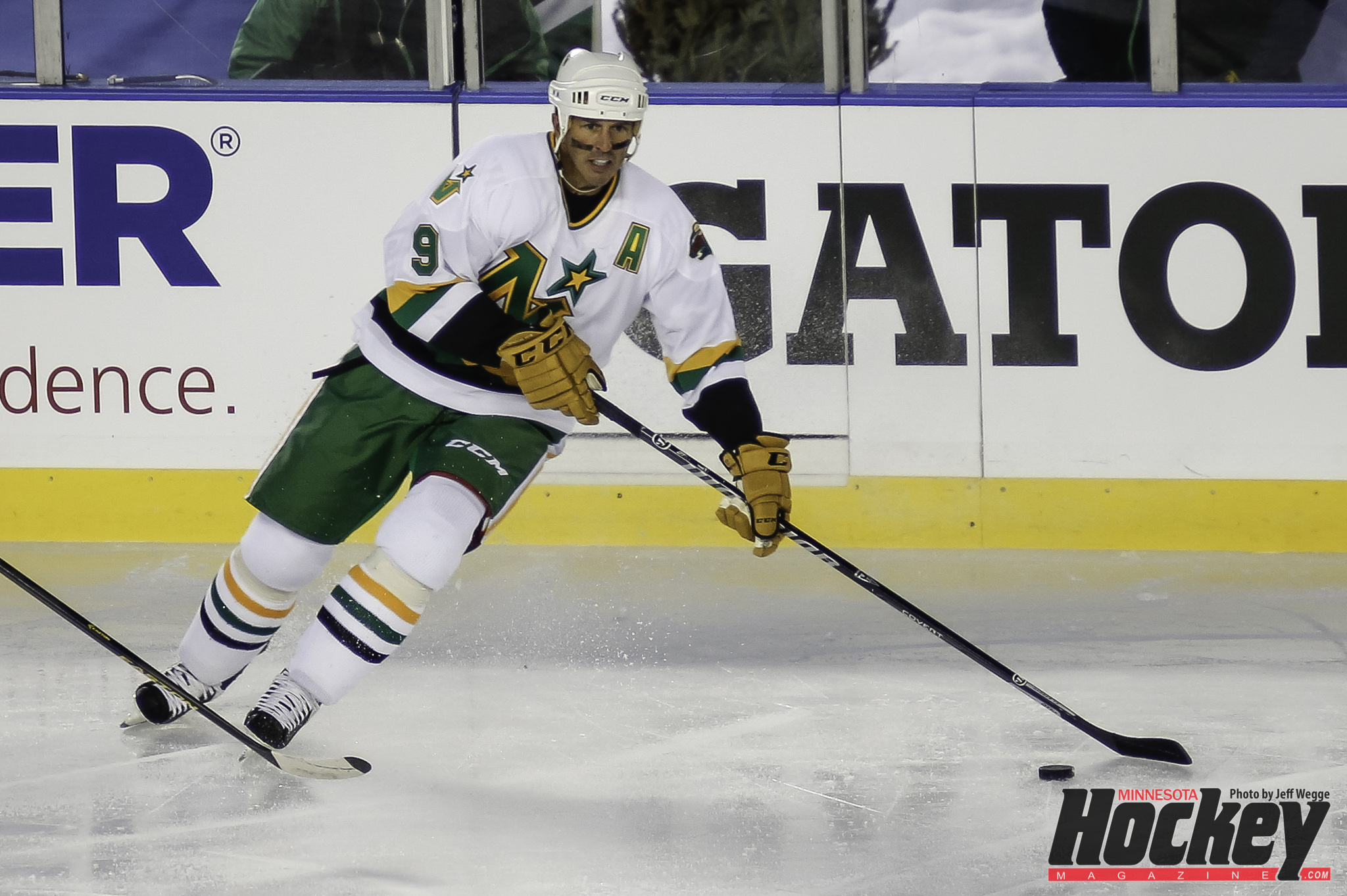 The sign greeted the line of patrons snaking its way around The Pint Public House’s bar Friday night in downtown Minneapolis. Yet Mike Modano stood at the front of it with a Sharpie in hand, grinning as he signed a smattering of memorabilia — including several North Stars jerseys bearing his name and No. 9 — and posed for pictures as part of a pre-arranged meet-and-greet.

The highest-scoring American in NHL history was more stoic Saturday afternoon as he stepped off a tour bus and walked briskly into TCF Bank Stadium. Two hours later, he and 22 other local hockey greats of yesteryear passed underneath a stream of green-lit fireworks and onto the temporary Stadium Series ice here. And the pregame ovation from 37,922 at Saturday’s alumni game when Modano’s name was called ranked among the evening’s loudest.

It’s that kind of zeal that in less than a half-decade endeared Modano to Minnesota — and Minnesota to Modano.

“It’s nothing you wouldn’t have expected,” Modano said. “Just great fans, just passionate people that are loyal about the game and the history of the organization.”

They came to celebrate the State of Hockey’s heritage Saturday. The elder among them have Lou Nanne, Tom Reid, Neal Broten and Dino Ciccarelli. Today’s heroes wear red and go by names like Ryan, Zach and Devan.

But those who endured Minneapolis-St. Paul’s hockey black hole from 1993-2001 also remember fondly the seismic flash before the void.

“The guy, he’s a franchise builder,” said Nanne, who coached the North Stars and Wild alums to a 6-4 victory over Chicago’s old-timers Saturday. “There are very few players that are both franchise players, but then they bring you out of your seats. They’ve got that kind of charisma. He’s one of them, and it’s something that’s special for this community and … in Dallas. But he’s still a big part of Minnesota hockey culture.”

Playing on a line with Brian Bellows and Brian Rolston, Modano skated in a Minnesota sweater for the first time since Norm Green moved the franchise to Dallas in 1993. The 45-year-old spent the first four seasons of his 21-year Hall of Fame career calling the Met Center home ice.

Nanne drafted Modano four days before his 18th birthday, rendering him the second American to be taken first overall. A rookie year that probably should’ve brought Calder Memorial Trophy honors, a Stanley Cup Finals appearance his sophomore season, and 123 goals and 186 assists later, Green ripped Modano and the North Stars away from the Twin Cities and planted them in Dallas.

Modano will always be remembered as a (Lone) Star. His number, which he wore in homage to both Gordie Howe and Ted Williams, hangs in the American Airlines Center rafters.

Sitting in the victors’ dressing room on TCF’s ground level Saturday night, Modano had the Sharpie out again. This time, he was signing jerseys for the likes of Steve Payne and Reed Larson, part of a flurry of signature exchanges among players as they sipped on Coors Light.

And for one day in the sun, at least, Modano was able to return to the beginning.

“Obviously, it’s a sentimental thing,” Modano said. “My career started here. I had four … of the greatest years (of my life).”