From consolation to destination

No. 1 Minnesota State’s rank among prospective recruits also on the rise 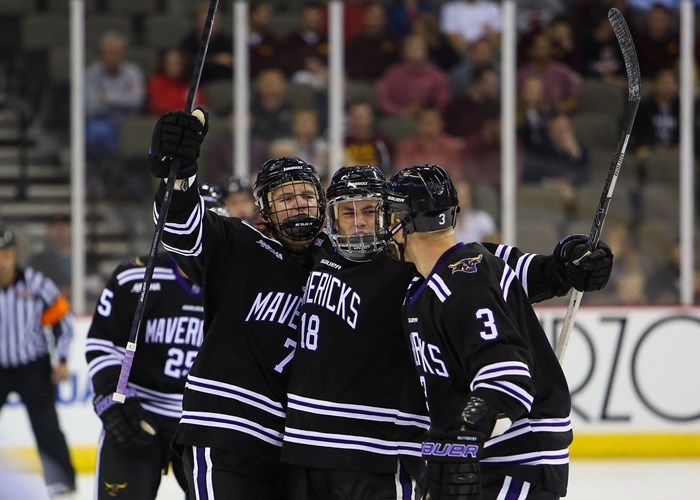 The Mavericks are on top of the NCAA hockey world with their first-ever Division I No. 1 ranking. (Photo / Minnesota State University Athletics)

No. 1 Minnesota State’s rank among prospective recruits also on the rise

It’s no secret that the state of Minnesota is an appealing destination for college hockey recruits. The state boasts the highest number of native players going on to Division I programs, many of whom want to stay close to home while they continue their careers. With five Division I programs in the state, it makes sense that you’ll find a number of homegrown players on each roster.

For years, the University of Minnesota picked the top recruits in the state in dominating fashion, and continue to get a solid crop of young men each season who want to pull the maroon and gold sweater over their shoulder pads. But the emergence of other programs in the state has made the recruiting process a little more interesting, and a little less cliché.

While the Gophers are still the most recognizable college hockey program in the state, others have made waves in recent history.

Bemidji State University made a surprise appearance to the Frozen Four in 2009, two years before the University of Minnesota-Duluth won their first National Championship in 2011 at the Xcel Energy Center in St. Paul. St. Cloud State added its name to the board in 2013 with their first Frozen Four appearance.

While BSU has found themselves to be a middle of the pack team since their deep run in 2009, both the Bulldogs and the Huskies have managed to stay relevant among the top teams in the nation over the past few seasons. There’s only one program among the five Division I hockey teams in the state that seemed to be falling behind.

Minnesota State University held the reputation of a doormat in the WCHA for years since its admission into the league in 1999. It was time to reevaluate the way things were being done and find a way to compete with these teams they were falling to on a weekly basis, and they did just that.

Mike Hastings was hired as the new head coach in the summer of 2012, only the third coach in the program’s Division I history following Troy Jutting’s 11-year tenure. Hastings came from the University of Nebraska-Omaha, where he was associate head coach to Dean Blais. Before that, the Crookston, Minn. native spent a season under Don Lucia at Minnesota following a 14-year coaching career with Omaha of the USHL, where he never had a losing season.

Hastings was inheriting a team which finished 11th in the then 12 team WCHA, and hadn’t qualified for the NCAA Tournament since 2003. There was optimism, of course, but no one expected a dramatic turnaround. Rather, it could have been assumed that the coaching change would take a few seasons until Hastings had his own recruits before any significant differences were made.

But Hastings was set on making his mark immediately.

In his first season behind the Maverick bench, Hastings brought the team that was 12-24-2 in 2011-2012 to their first WCHA Final Five and NCAA Tournament appearances in ten seasons with a 24-13-2 record, setting the program record for single-season wins in the Division I era – nearly a complete 180 degree turnaround.

The next season, he would do it again.

In 2013-2014, the Mavericks powered through the new-look WCHA, continuing to build on the foundation they set the season before. They managed a second place finish in the WCHA regular season standings, one point behind MacNaughton Cup winner Ferris State.

MSU went on a run, going 12-0-1 in the 13 games leading up to the NCAA Tournament. Over that span, the Mavericks won their first Broadmoor Trophy as the WCHA Final Five champions en route to their second consecutive NCAA Tournament appearance.

Though the Mavs fell short, losing 2-1 to UMass-Lowell in the NCAA Northeast Regional Tournament, it solidified their spot as a respected program that can contend for a spot in the Frozen Four.

Fast forward to this season, Minnesota State stands 16-4-1 on the year and was billed the no. 1 team in the nation on Monday, the highest ranking in program history during the Division I era. They sit atop the WCHA standings and also rank first in the NCAA Pairwise rankings. With the way things have been going for MSU, it appears they are headed for a third straight NCAA Tournament appearance, and a chance at setting a new program standard for single-season wins once again.

With the success of this southern Minnesota program the past few seasons, it also seems it may be putting itself in the hunt for some of the area’s top recruits. Case in point, Elk River’s Jake Jaremko, an MSU commit, has 45 points in 15 games this season for the Elks. And with Hastings’ history of coaching in the USHL, it appears the Mavs may also continue to land recruits out of junior hockey who are older, bigger, and more experienced by time they arrive in Mankato.

While a program’s success is evaluated on a year-to-year basis, Minnesota State has appeared to emerge as a team to compete with, no longer a doormat. In regards to college hockey in Minnesota, the Mavericks are the little brother no more.