Here’s the skinny on the Frozen Four field. 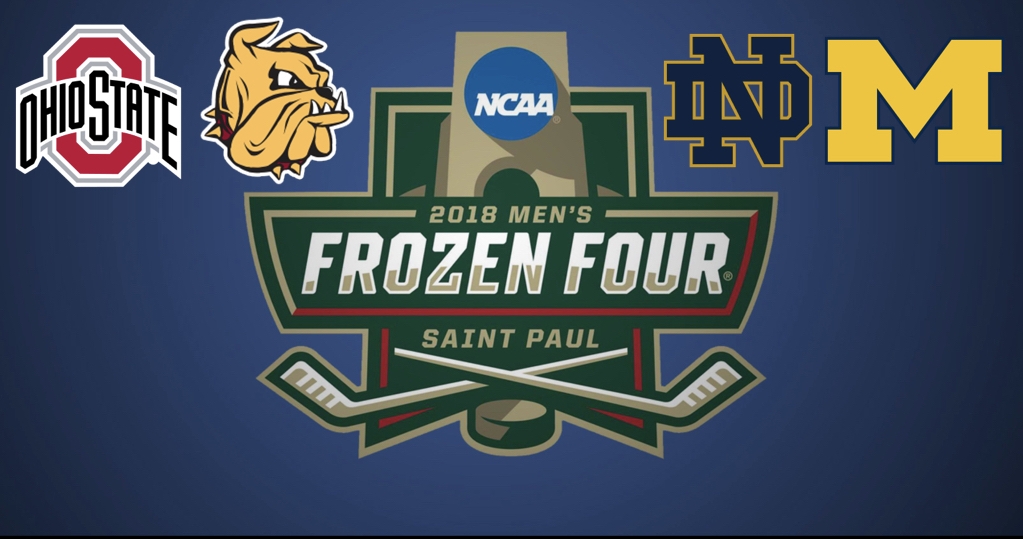 The Frozen Four returns to the Xcel Energy Center in St. Paul for the first time since 2011. The Notre Dame Fighting Irish, Ohio State Buckeyes, Michigan Wolverines and the University of Minnesota Duluth Bulldogs represent the four remaining teams vying to be a national champion.

Although it deals with scrutiny from fans – especially here in Minnesota – the Big Ten conference, which was formed just five years ago has three recipients in this year’s tournament. Meanwhile, the Bulldogs of the National Collegiate Hockey Conference (NCHC) are looking to return to the national title game for the third time this decade and for the second consecutive season.

The Frozen Four begins Thursday, April 5, with Ohio State taking on Minnesota Duluth at 5:00 P.M., followed by Michigan vs. Notre Dame at 8:30. Here’s the rub on this year’s teams:

Synopsis: In its first year in the Big Ten Conference, Notre Dame beat up on everyone. They won their conference regular season and tournament and were the only program of the 16-team tournament to do accomplish said feats. It’s also the second year in a row, that the Irish are in the Frozen Four.

Strengths: Notre Dame plays a defensive-sound game, led by sophomore goaltender Cale Morris who’s .945 save percentage was the best in the nation this season. Boasting a “prevent defense” style of hockey can be troublesome, but if the Irish get up early, good luck making a comeback. Notre Dame is 21-2-2 this season when scoring first this season. It’s penalty kill percentage of 88.9 percent was second only to Ohio State.

Weaknesses: One has to to wonder if Notre Dame has enough offense. Jake Evans, a Hobey Baker Finalist picked up 42 points this year, but just 11 found the back of the net. Junior Andrew Oglevie paces the team with 13 goals and is one of just four players who have double-digit goals while nine different players have at least six goals. There’s no doubt they have some depth throughout their lineup, but who will pick up the big goal when the team needs it the most? That remains to be seen.

Synopsis: What a complete 180 the Michigan Wolverines pulled off this season. In Mel Pearson’s first season taking over for the legendary Red Berenson, the Wolverines posted a 22-14-3 record. For a team that won just six conference games the season before, it’s quite the turnaround.

Strengths: The Wolverines 133 goals were 7th in the nation and second in the Big Ten. Junior Cooper Marody put up 50 points – 16 goals, 34 assists – in 39 games and was an impressive +20 this season. In four meetings this season, Michigan went 2-2 against Notre Dame. However, Michigan swept the Irish when the two teams met in a home-and-home series in February, so they have Notre Dame’s number.

Weaknesses: Junior goaltender Hayden Lavinge has to be on his game when Michigan hits the ice in St. Paul. His 2.77 goals against average and .909 save percentage aren’t spectacular, but he did shutout the Irish in a Feb. 18 1-0 win. Michigan’s special teams aren’t great either, their 75 percent penalty-kill rate was the fourth-worst figure in all of college hockey.

Synopsis: After another successful season in the Big Ten, Ohio State is back at the Frozen Four for the first time in 20 years. The Buckeyes went 26-9-5 overall and 14-8-2 in conference play. There isn’t a statistic the team doesn’t excel in.

Strengths: Ohio State was one of just two teams to rank top 10 nationally in: offense, defense, power play and penalty kill. Six players are double-digit goal scorers, including sophomore Tanner Laczynski, who secured 46 points – 16 goals, 30 assists – in 40 games. Junior goaltender Sean Romeo is as good as any netminder in the country as the North Carolina native won 22 starts and posted a 2.06 GAA to go along with a .920 save percentage.

Weaknesses: With the so many positives to Ohio State’s game, it’s tough to find a weak link. Yet with the team being at the Frozen Four for the first time since 1998 and still lacking a national title, will the bright lights of college hockey’s biggest stage blind the Buckeyes? Time will tell.

Synopsis: Aftera rollercoaster second-half of the season, the Minnesota Duluth Bulldogs are back at the Frozen Four.

They were national runner-ups last year and lost many talented players. However Scott Sandelin’s young core of Bulldogs are looking to pick up a second national championship in the same building that they captured their first seven years ago.

Strengths: There’s definitely going to be a home-town advantage for the Bulldogs when they take the ice in St. Paul. UMD backs up a deep lineup with a rock between the pipes in Hunter Sheppard. Freshman Scott Perunovich (36) and Riley Tufte (29) rank first and third respectively in points. Perunovich is a Hibbing native while Tufte, the 2016 Minnesota Mr. Hockey winner from Blaine High School, was a first-round pick by the Dallas Stars the same year.

Weaknesses: Again, this is a young group of dogs – or pups if you will – and UMD’s own worst enemy will be themselves. Just a few weeks ago in the exact same arena, UMD struggled mightily at the NCHC Frozen Faceoff tournament. The undisciplined Bulldogs took several penalties and appeared all out of sorts. However, they allowed just three goals in two games in winning the West Regional and a well-earned return to the Frozen Four. The Bulldogs need to continue to play a smart game to capture their second national title.