Trouble at the Farm

As losses pile up for Iowa Wild, frustration sets in. 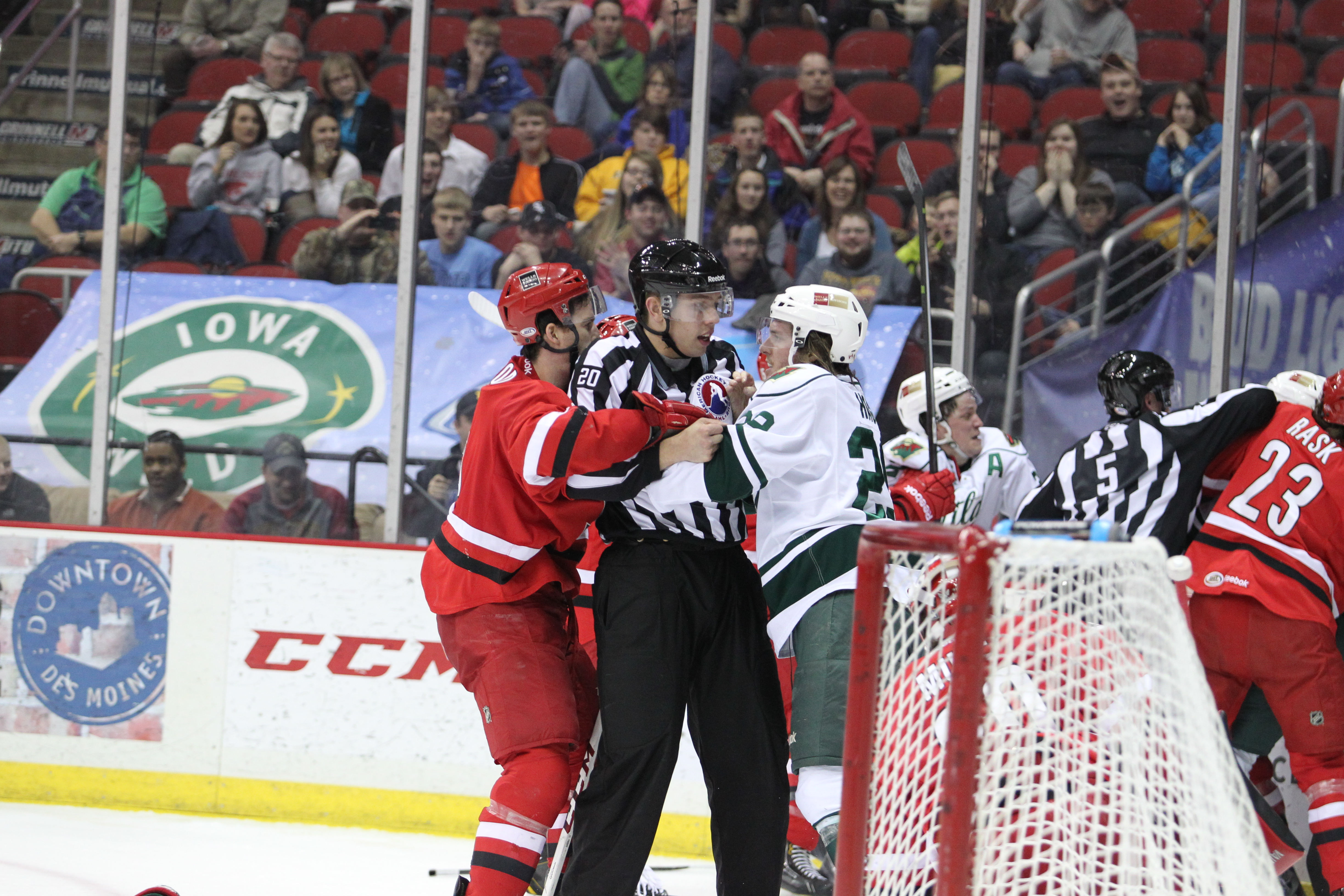 Iowa’s Marc Hagel gets into a scrum in a game against the Charlotte Checkers on March 25 (Photo: Reese Strickland/ Iowa Wild).

Frustration may be starting to set in for the Iowa Wild.

The Wild (25-30-6-4, 60 pts.) are currently on a four-game losing streak and coming out of a game where they had nine players receive misconducts, compiled 162 penalty minutes and finished with only nine total skaters in a 7-0 loss to the Charlotte Checkers on Wednesday.

“I cannot imagine that, as far as the frustrations go, that this wouldn’t be the bottom for us,” Wild coach Kurt Kleinendorst said after the loss.

While technically still in the playoff race, the Wild’s chances of making it with just 11 games left to play this season seem long behind them as they currently sit in last place in the American Hockey League’s Western Conference with 60 points.

“We’re a better team than we’ve been showing,” Wild captain Jake Dowell said. “The bottom line is that we need to actually show it and we can’t just keep up with the lip service and telling everybody we’re better and we played hard but we deserve better. The bottom line is that this is a results game and we’re not getting the results and that starts with me and trickles on down.”

The Wild have just concluded a six-game home stand in which they won their first game back on March 16, but lost five-straight after that. They have struggled at home, currently sitting with a record of 11-20-3-1 at Wells Fargo Arena this season.

“The good thing is we’re getting out of town,” Kleinendorst said. “I still for the life of me can’t figure out why we can’t perform here but we don’t. Yet we go on the road and play really well. Same team, same guys, same preparation, same everything. It’s mind boggling.”

The Wild will start their road trip in Toronto on Saturday with a game against the Marlies at 2 p.m. Then they will play against the Utica Comets on Sunday, the Grand Rapids Griffins on April 2, the Milwaukee Admirals on April 4 and against the Chicago Wolves on April 6 before returning to home ice on April 11.