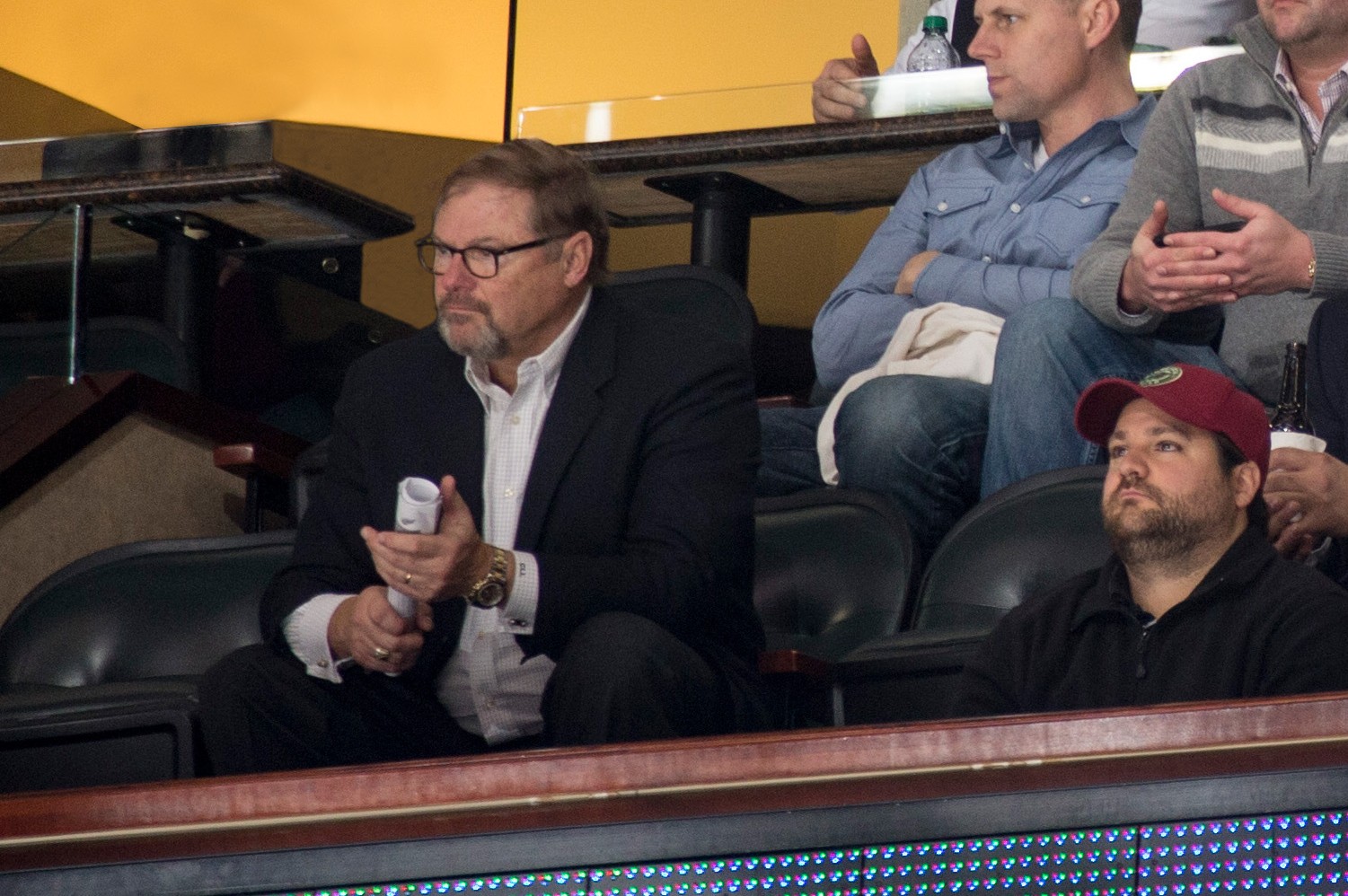 It’s a Thursday night in early October. The Wild are playing the Buffalo Sabres. But not the “Jack Eichel” Buffalo Sabres, the Buffalo Sabres you’ve never heard of, most of whom will be Rochester Americans by next week. The Wild, however, have a lot of their starters in the game despite the fact that this is an utterly meaningless contest to just about everyone involved — except for one man: Wild Owner Craig Leipold.

I, along with other members of the local media, were invited to watch this final preseason matchup in Leopold’s suite. Craig greeted his guests before the game started, pointing out his spread of food specifically there for us and ordered us all to have a wonderful time.

That’s when things got serious. As we took in the game and enjoyed ourselves, Leipold became all business. He took “his seat” (second row from the bottom of the box second to last seat in the row) to watch the game. This is apparently his ritual, to leave the seat empty next him almost daring anyone to sit there and try to chat — but good luck to anyone who tries. While Leipold is a kind and genuinely outgoing man this is work for him and he prefers to sit alone during games so that he can concentrate. Although he did indulge one local media member who sat next to him this night because, as he said: “Hey it’s the preseason”.

Craig Leipold is a man who is all about his work. He loves hockey and he loves the Wild. He is smart enough to know his limits as an owner which makes him an owner that people love to work for. But he’s also an owner that is ready for more than just an appearance in the postseason. As are the fans of his beloved club.

The Wild didn’t make many moves this offseason. They didn’t need to. They locked up their heroic goalie for the long term just as they should have. They signed some minor free agents, while letting others go. This team is essentially the same team that lost to Chicago five months ago — just as it should be. But it’s time for the Wild to take the next step. They have the big horses (Parise, Pominville, Koivu) as well as the supporting cast (Coyle, Zucker, Nino) and they even have who they believe to be a franchise goalie in Dubnyk. It’s clear that Leipold and the Wild are realizing that the window of opportunity to win a title is wide open and that it’s not going to stay open forever.

That’s where Leipold comes in and why — you can imagine — he stresses over his investment. Leipold become the majority owner of the Wild in 2008. He has made some VERY big purchases in his time. Some have worked out and others have not but that’s hockey and he seems to understand that. But as badly as he wants to build a championship contender, that moment has never come. The Wild have yet to get past the second round of the postseason in his tenure.

Which brings us back to that preseason game with Buffalo. Leipold is making the rounds between the first and second periods. Saying hello, having some food and chatting with the very folks who cover his team for better and for worse. His team is up 3-0 in a game, that once again I’ll remind you, doesn’t matter. The intermission clock is winding down and Leipold gets to his seat quickly so he doesn’t miss any of the action.

This period, he is left alone. No one dares sit next to him — even though he gave us his blessing earlier. Early in the second a bad mistake is made by a Wild defenseman which nearly turns into a goal. You can hear an audible groan from Leipold just a few seats down.

Then the Sabres score with just a few minutes to go in the second to make it 4-1. Leipold throws his head back up in disgust. It’s only a preseason game but he is less than pleased. Not to the point that it’s uncomfortable, Leipold knows he’s also hosting company tonight, but just enough that he can’t hide his competitiveness.

You see, Craig Leipold wants to win every night and not because he wants more money — heck the arena sells out nearly every night anyway. But because he believes in hockey in Minnesota and wants nothing more than for the world to know how great it is. It’s why he spent $196-Million dollars on two high profile players two seasons ago. It’s why he calls Commissioner Gary Bettman regularly to tell him Minnesota is the place for the Winter Classic (even if he admits the Stadium Series is a good start) and it’s why he desperately wants to bring the Stanley Cup to St. Paul.

And he knows it starts in a meaningless game against Buffalo in October.