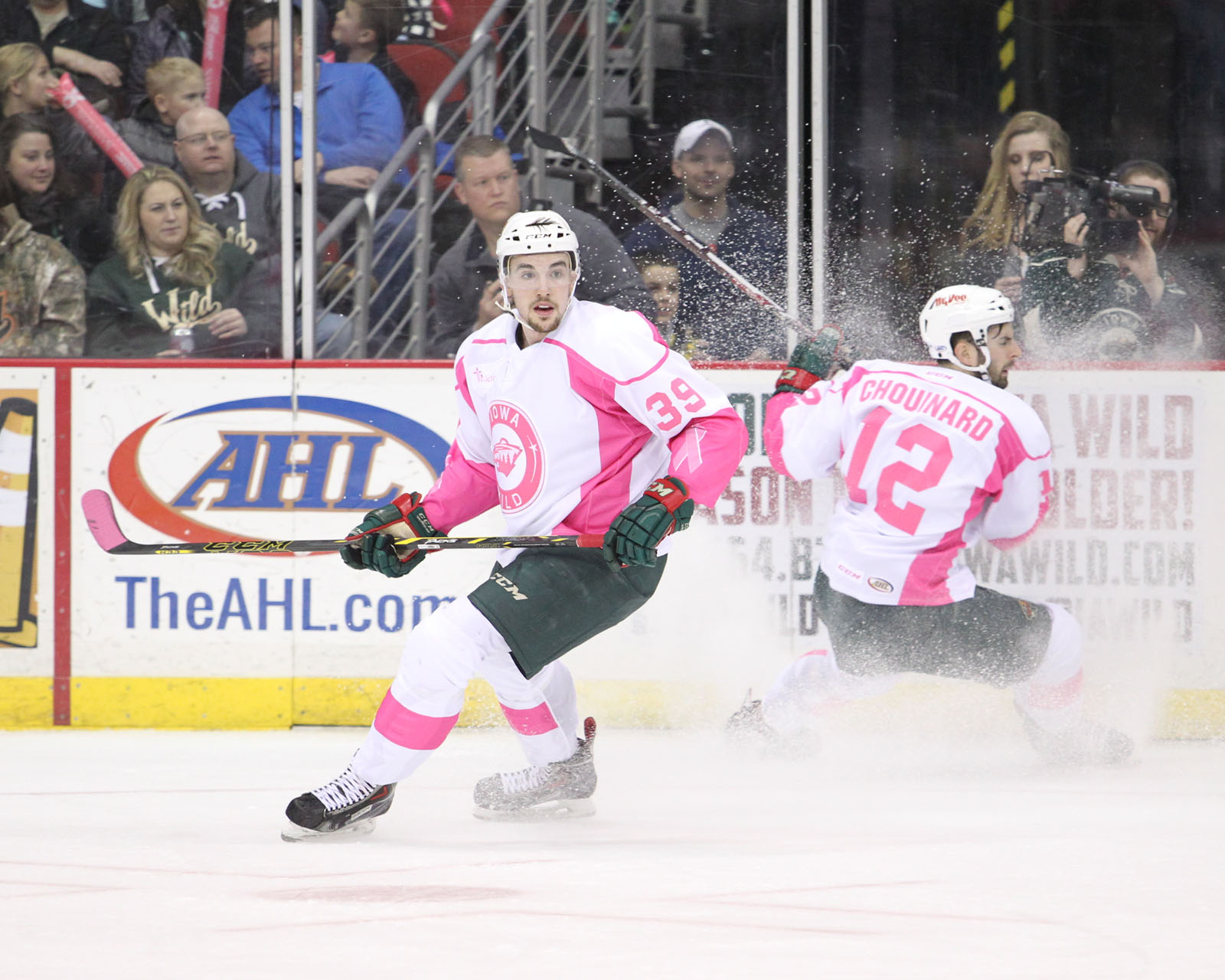 DES MOINES, IOWA – Things keep getting worse for the Iowa Wild as they have found themselves on the wrong end of five-straight games and nine of the last ten and are in last place in the Western Conference with just 36 points (17-34-1-1) through 53 games.

If the Wild aren’t having problems putting the puck in the net, they are having troubles keeping the puck out of their own net and that was apparent in their most recent 3-game homestand last Friday, Saturday and Sunday at Wells Fargo Arena in Des Moines, where they lost all three games.

They struggled to score in the first two games as they lost to the defending Calder Cup Champion Texas Stars 3-1 on Friday and 2-0 on Saturday in front of 9,107 fans. Tough guy Kurtis Gabriel scored 2-of-3 Iowa goals on Sunday, but the Wild still fell 5-3 to the Western-Conference leading Oklahoma City Barons.

“I’ve never seen a team find a way to lose a game the way we have,” Iowa coach John Torchetti said.

Gabriel said that since Torchetti became the coach earlier this season, he has preached a “shooting mentality” to help get them through the scoring troubles they had in the four games prior to Sundays game. In those four games, the Wild didn’t score more than one goal.

The Wild led Sunday’s game three different times and had several chances to regain the lead or tie it up in the third period, including a breakaway by Gabriel that gave him a chance to record the first-ever Iowa Wild hat trick. Gabriel’s shot was stopped by Oklahoma City goalie Laurent Brossoit.

“I’d love to tell you I had the answer but we’ve got to be harder to play against,” said Torchetti. “The goals that we’ve given up, the puck is on our stick, our partner’s open and that’s it … You’ve got to execute when they game’s on the line.”

Gabriel, a rookie from Newmarket, Ontario, has been known more for his ability as a fighter than a goalscorer, but in Sundays game, he showed both abilities as he fought once and scored twice in the first period.

“(I’m) just trying to come in here and establish myself in a role, fit into the team, just be accepted by everyone and do whatever’s asked of me,” said Gabriel. “I’ll do whatever it takes to win and right now it’s not good enough to win.”

Torchetti said Gabriel has “come along way” in the last month especially in his confidence.

“I think he’s adapted to the speed of the game,” said Torchetti. “I think that confidence goes a long way with athletes.”

Torchetti also said that while he knows he’s a tough guy and can fight, he’s “got to be able to play” if he wants to make it to the next level.

“If you’re going to make the next step to the NHL, you’ve got to be able play a solid eight minutes on the fourth line,” said Torchetti. “You just can’t be a fighter and that’s why they drafted him and they’re excited about his development so far … He’s just got to continue his improvement.”

He was drafted by the Minnesota Wild in the third round (No. 81 overall) of the 2013 NHL Entry Draft and played eight games last season posting two goals and two assists. So far this year he has 10 points (six goals, four assists).

In the month of February, the Wild have signed five new players to PTOs and all five of them played during the three-game weekend. Forwards Greg Wolfe, and Joe Perry and defensemen Collin Bowman, Joel Chouinard, and Joe Stejskal were signed to PTOs by the Wild this month.

Torchetti said there were a few breakdowns with the newcomers, especially in Friday night’s game and that they should have had a better result in that game, but he still said that he thought they have done well.

“They’ve worked hard, they competed, I like their game, I like their level of intensity and now you’ve got to see if they can keep their consistency with the intensity because everyone can play their first three games because they’ve got a lot of juice and energy and they’re focused,” said Torchetti. “To make the jump to the next level, from the East Coast League to the American League is to be a consistent player.”

Bowman had an assist on Iowa’s goal of the game on Friday against Texas, which was the first goal of the season for forward Olivier Archambault with 54 seconds to go. Archambault was not recently signed to a PTO, but was recalled from the Alaska Aces on Feb. 5.

Gabriel said that he “can’t say enough” about the recent additions to the team.

“Every guy coming up has been totally great in the room, they do their job,” said Gabriel. “They’re great guys. I’m buddies with all of them. They work hard, they’ve earned their opportunity up here and there’s jobs to be had like Torch says, so I think a lot of them are making the most of it.”