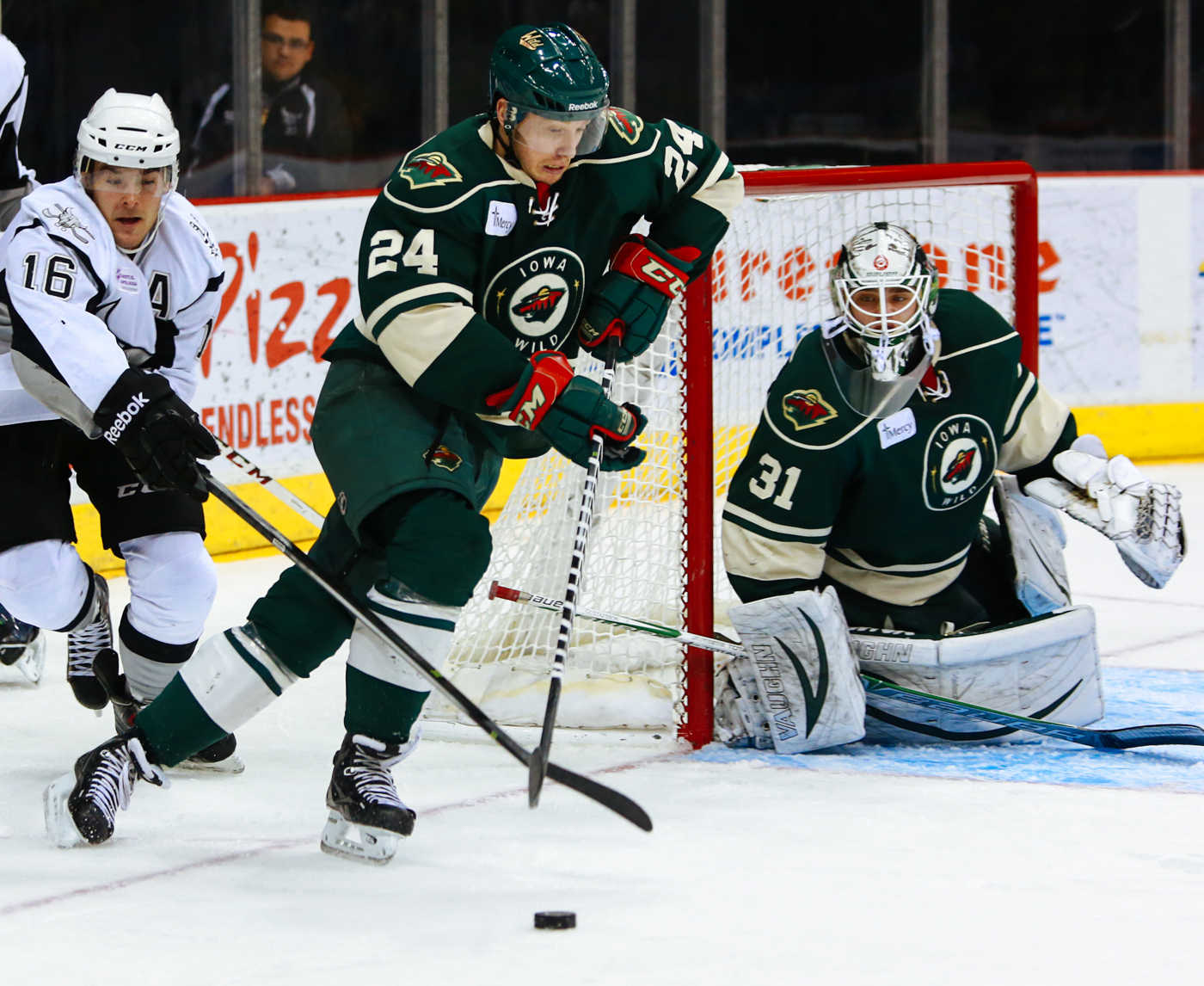 Featured Image:
Jonathon Blum, shown in a game against the San Antonio Rampage on Jan. 24, has been recalled and reassigned multiple times in January.
(Photo: Josh Huskin, San Antonio Ramapge)

Iowa Wild strive for synchronicity despite a roster in constant flux …

The Minnesota Wild have been plagued with injuries so far in the 2013-14 season. With players like forward and captain Mikko Koivu, goaltender Josh Harding and defenseman Jared Spurgeon currently out with injuries and many more having injury troubles at one time or another this season the Wild have been forced to fill their roster spots with players from their AHL affiliate in Des Moines, Iowa.

When this happens, the Iowa Wild must also find a way to fill roster spots and compete in the AHL. So far in January the Iowa Wild have signed seven players to professional try-out (PTO) contracts and have called up two players from the Orlando Solar Bears of the ECHL.

Iowa Wild coach Kurt Kleinendorst talked about getting a team of new faces in sync.

“You have to understand who’s not here, where are they, who we replaced them with and where did they come from,” Kleinendorst said. “When Chuck (Fletcher) or Jim (Mill) calls they’re not asking me for my fourth-line players. They’re taking the very best of what we have and then we’re doing the same thing down in the ECHL … We can’t replace those guys, we can’t expect to replace those guys. What we have to do is find a way to make it work with the guys (we have), and we will.”

The Wild have found success with the players they’ve had to call up but they have struggled at times. After a 4-3 overtime loss to the Toronto Marlies in Des Moines back on Jan. 15, a game that the Wild led 3-2 with 5:56 to go in the third period, forward Carson MacMillan said that they try not to use new faces as an excuse.

“Every player that’s come up has given their heart out and there’s lots of ice time up for grabs,” MacMillan said. “Guys need to step up and we all just need to give a little extra more.”

Players that have been signed to PTOs this month from Orlando include forwards Tyler Murovich, Justin Mercier, Jim McKenzie, Mike Ullrich, Broc Little, Mickey Lang and defenseman Nicholas Rioux. Little and Rioux have since been release from their PTOs and returned to Orlando.

The Iowa Wild have been without two of their biggest scoring threats in Jason Zucker and Erik Haula as well as their No. 1 goaltender Darcy Kuemper for most of the month of January so far. Defenseman Jonathon Blum has been recalled by Minnesota and reassigned to Iowa twice so far in January.

While the Wild have compiled a 6-2-1-3 record in the month of January, Kleinendorst said that it takes time to get a team with so many new faces in sync.

He went on to say that they are “very close” to getting into a rhythm.

“I’m impressed with how far they’ve come in such a short period of time, but we’re going to have some moments where we’re not quite perfect yet,” Kleinendorst said.

John Curry has been called upon a couple of times this season in the absence of Kuemper and has done well for the Wild. So far this season he has a .944 save percentage with a 4-2-1 record in seven appearances. He had a 45-save, shutout performance in a 1-0 win against the Lake Erie Monsters in Des Moines on Jan. 18.

The Wild just finished a road trip to Texas going 2-0-0-1 in three games. On Wednesday, Jan. 22, they fell at the hands of the Texas Stars 5-4 in a shootout in Cedar Park, Texas but bounced back and beat the San Antonio Rampage on Friday, Jan. 24 5-4 in a shootout and 2-1 in overtime the next night. Curry got the start in Saturday’s game and stopped 25 of 26 Rampage shots.

The Wild continue their season on Friday at home against the Milwaukee Admirals and then travel to take on the Chicago Wolves in Rosemont, Ill. on Saturday.