UMD-Gophers doubleheader could be annual highlight 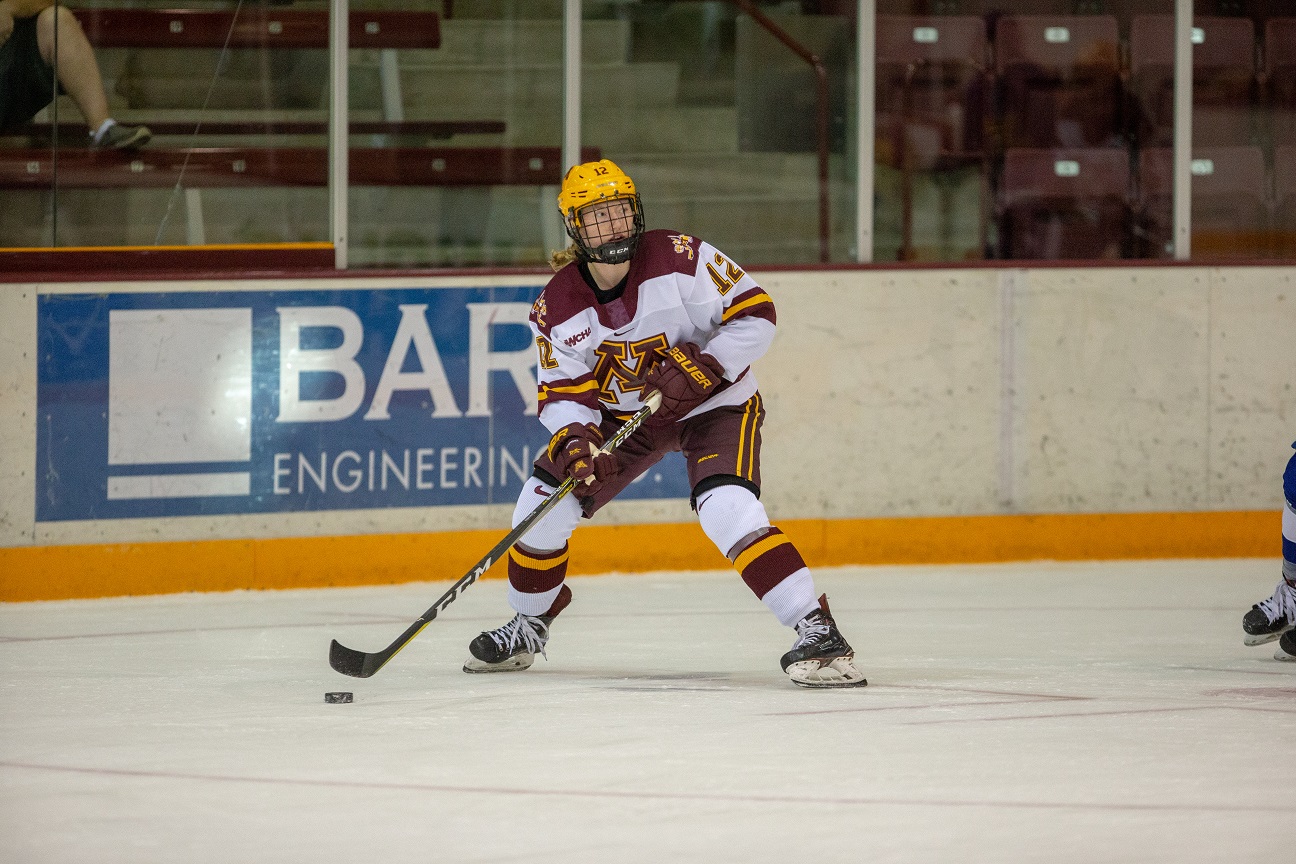 One of the neatest stories during the transition year from the U.S. women’s hockey gold medal in South Korea was that center Kelly Pannek and goaltender Maddie Rooney became close friends as roommates on Team USA. Both were outstanding as Team USA beat Canada in the gold medal final, thanks to Rooney’s dramatic saves in the shootout after the teams tied.

The games are now history, and the players have returned to their teams — including Pannek, back as top-line or senior center for Minnesota and Rooney as junior goaltender for UMD. The fact that they’ve continued to heckle each other about whether Pannek could score on Rooney, or Rooney could stop Pannek’s best shot, continued in a good-natured vein when their teams met for a WCHA season-opening series at Duluth’s AMSOIL Arena.

Favored Minnesota beat UMD 5-2 in the first game, spotting the Bulldogs a 1-0 lead when freshman Gabbie Hughes scored after only 1:07, then the Gophers scored four straight goals in a 4-2 first period en route to a 5-2 victory. Rooney said later she was a bit off her game, and while all five goals came on rebounds, at least Pannek didn’t score any of them. 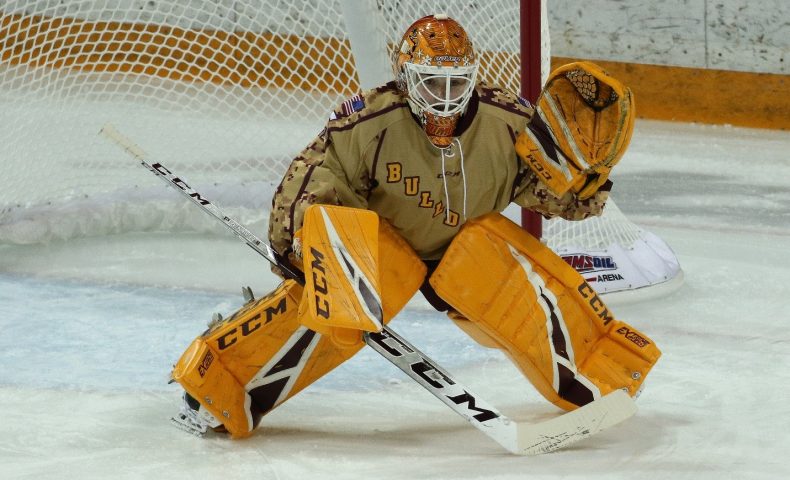 “She’s such a great goaltender that our strategy was to shoot low, through congestion, hoping to take her eyes away, and leave us some chances on rebounds,” said Gophers coach Brad Frost. “If you noticed she didn’t make many glove saves because we didn’t shoot high enough for her to catch any. She’s so good that if she can see it, she’ll stop it.”

The next day was Saturday, October 6, and if you love hockey, AMSOIL Arena was the place to be, because the Gophers and Bulldogs would stage their rematch at 3 p.m., followed by the season-opening battle between the Minnesota men and defending NCAA champion UMD.

After about six hours of hockey, both teams in both games played tenacious, tense hockey, and both games wound up in ties. Therein lies an interesting difference, because the women’s 2-2 tie had as dramatic a conclusion after an overtime as any storybook writer could concoct, while the men’s 1-1 tie left an announced 7,382 fans silently waiting for something more in an anticlimactic ending.

More on that later. First, we all know that the women play at a high level these days, but they’ve never generated the strong fan support of the men. Maybe now, in the “MeToo” era, with a new women’s pro hockey team, the Minnesota Whitecaps, playing their first season, things might improve. Especially if UMD can rise to its previous level and compete with the likes of Minnesota and Wisconsin.

The caliber of play between the two has been irregular in recent years, since UMD began hockey 20 years ago and won the first year of WCHA women’s hockey. The Bulldogs went on, under Shannon Miller, to capture the first three NCAA women’s tournament championships, and later added two more.

The Saturday game on the league’s opening weekend showed promise for both teams, although it was overshadowed by constant stories about the two roommates from the Olympics going head-to-head.

Freshman Gabbie Hughes from Centennial again scored the game’s first goal, on a second-period power play, and this time Anna Klein added another power play goal for a 2-0 UMD lead. Minnesota came back in the third, when Nicole Schammell knocked a rebound past Rooney at 6:09 of the third, and two minutes later, when the Gophers got a 5-minute major power play, Pannek seemed to mis-hit a shot from the right circle that found its way through congestion and into the left edge, tying the game 2-2.

It stayed 2-2 through the end of the third period, and through a scoreless 5-minute overtime. Next up, each team selected three players for a shootout to decide the game. UMD coach Maura Crowell, a quick-learner herself, sent Hughes out first and the freshman scored on Gopher goalie Sydney Scobee. Minnesota coach Brad Frost sent out Amy Potomak, the freshman half of the British Columbia first-line sisters with junior Sarah Potomak. Amy rushed in and was just about to make her move when Rooney, cat-quick, dived out and poke-checked the puck away from Potomak’s stick.

Next up was UMD’s Ryleigh Houston, and she also scored. That meant the Gophers No. 2 shooter would have to score or the shootout would be over and give UMD the extra point after the tie. The second Gopher shooter was none other than Kelly Pannek.

If they were still roommates, this one could have been for who would have to do the dishes or something. Instead, it was for that important WCHA point — and bragging rights between the two forever more.

Pannek skated in swiftly, made her move, and — as recollections of Rooney’s gold-medal-winning save against Canada were regenerated — Rooney came up with the save. The game is officially a tie in NCAA records, but UMD owns a 3-2 “unofficial” victory in WCHA points.

“Oh yeah, we had a little joust at the end,” said Rooney, flashing her trademark smile because she knows she’ll be running into her old roomie again this season. 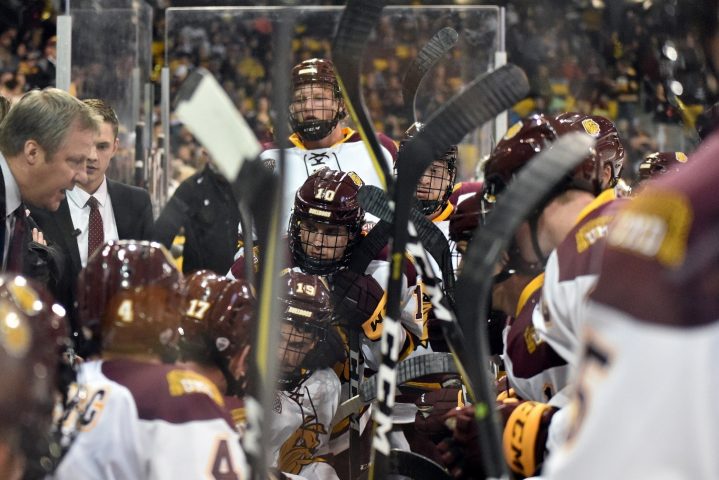 After a quick dinner break, the AMSOIL Arena ice was set up for the men’s game, which was preceded by the raising of the NCAA championship banner. It was also the first game as Gophers coach for Bob Motzko, who left after building St. Cloud State into an NCHC powerhouse to take the Minnesota job. It was a fast, tense game, with scoring chances at a premium.

Sampo Ranta, a Gophers freshman from Finland, scored with a quick shot off a pass to the slot by Tommy Novak at 12:07 of the first period. The Gophers held the Bulldogs off the scoreboard through the second period, and early in the third, Kobe Roth shot off a great pass across the slot from Riley Tufte, and when Mat Robson blocked it, Peter Krieger was there to score on a quick rebound.

The two teams finished the third period 1-1, and went into their 5-minute overtime. Now, while the WCHA has a rule for a 5-minute overtime and then a shootout to decide remaining ties, the Big Ten has followed the NCHC’s lead to use a 5-minute 5-on-5 overtime, then a 5-minute 3-on-3 overtime, and then a shootout, if necessary. But nobody in the building, except the coaches, officials, and maybe a few media types up in the sports-information-filled press box had a clue what would happen in a nonconference game between NCHC and Big Ten teams.

Both the Gophers and UMD had their chances as they raced up and down through the 5 minutes, but it remained 1-1. There followed a very interesting pause, as the fans sat there, silently, then rose and stood at their seats, still in silence. It wasn’t until the teams started to troop off the ice that the fans realized it was over. No second overtime, no shootout, no winner or loser even if only to satisfy the everlasting fans urge to see an outcome.

Which was more dramatic? No question. The women ruled.

NCHC commissioner Josh Fenton said, “The best thing would be if we could get all leagues to use our rule, with 5-on-5, 3-on-3, and then the shootout.”

We have indeed established Minnesota as the Wild’s “State of Hockey,” and if so, what could be better than to see the five Division 1 hockey schools in Minnesota win three different league championships?

Most all hockey fans are still perturbed that the Gophers split off from the WCHA to help start the Big Ten, and then state teams at UMD and St. Cloud State left to start the NCHC, leaving Minnesota State-Mankato and Bemidji State in the WCHA.

Now, if the Gophers can rise up to challenge Notre Dame for the Big Ten title, the State of Hockey would be paid off with more rich evidence of the excellence here.

That opening night at AMSOIL led to an interesting idea, incidentally. Since any games the Gophers play against in-state rivals are nonconference games, why not stage an annual season-opening extravaganza between the Gophers and Bulldogs men and women? The women would play at one site at 3 p.m. and the men at 7, then the teams would all head to the other city for the next night’s rematches. It was a great show in Duluth this season, so why can’t we make it an annual happening?