Glad To Be Back 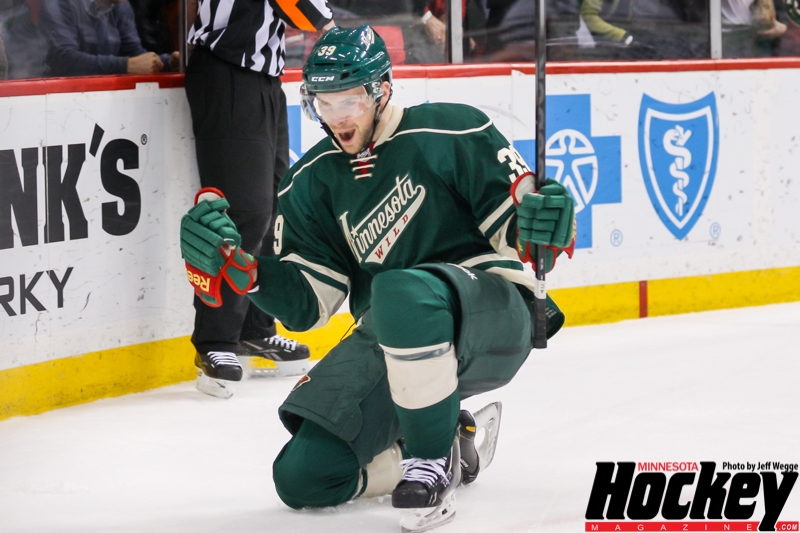 Nate Prosser celebrates his winning goal in overtime of the Wild’s 3-2 Hockey Day Minnesota win over the Dallas Stars on Jan. 18, 2014 at Xcel Energy Center (Photo by Jeff Wegge).

St. Paul – Although Nate Prosser was not selected as one of the three stars of the game, he must have felt like one.

Reporters surrounded Prosser in the Wild dressing room Saturday after the newest member of the team played more than 17 minutes, blocked a game-high three shots, recorded at least one big hit and forced one turnover.

He also had one giveaway, which Wild coach Bruce Boudreau slyly noted might have been because, only three days earlier, Prosser was a member of the opposition St. Louis Blues.

Boudreau gave the overall play of Prosser a thumbs-up — especially his nearly five minutes on the penalty kill.

“Nate did what we knew he does; he plays just a solid, safe game,” the coach said following Minnesota’s 2-1 overtime win over the Blues.

Prosser, 31, a native of Elk River, was signed away from the Wild by St. Louis in 2014, then waived and picked up again at the beginning of that season by Minnesota.

This season, same again — except the change came after 25 games with the Blues.

And Prosser’s smile was ear to ear following his team’s win over his former team. 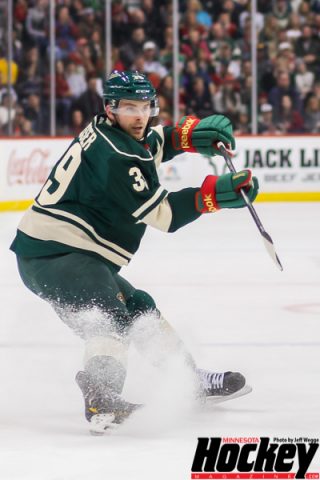 “This is crazy, what happened,” Prosser said. “To be back for my third time is pretty bizarre, but this group can take me in. It’s a good group of guys and I’ve a lot of good relationships in here, so it’s a pretty seamless transition for me.”

Prosser was mostly a watcher during his time with the potent Blues, playing only one game before he was waived. He arrived in Minnesota in time for one practice with the Wild on Friday, then jumped straight into the lineup.

It was a stunning development for him: He left the first-place Blues but landed on his feet and was able to silently absorb a bucketful of kidding before and during the game from his old mates.

It was all the spirit of friendship.

“I was able to form a good bond with a lot of guys,” he said. “Even though I wasn’t in the lineup a lot, I still met a lot of good guys down there. They took me in pretty well.

“I was sad to leave, but getting the opportunity to come here and put on this sweater tonight was a dream.”

Prosser was not alone in standing tall against the Blues, who brought a 17-8-1 record to the Xcel Energy Center. Devan Dubnyk made 41 saves as St. Louis outshot the Wild 42-25, and Matt Dumba banged in a loose puck that slithered off Charlie Coyle’s stick 39 seconds into overtime for the winning goal.

It enabled the Wild to sneak away with two points — they were outshot 14-9 in the second period and 16-8 in the third as they took four penalties over those 40 minutes.

Prosser was a key factor all game and especially on the PK, where he put himself in shooting lanes, used his 6-foot-2 frame to shove guys out of the crease area and typically cause problems for the Blues.

Unlike defenseman Kyle Quincy, who the Wild placed on waivers before picking up Prosser, he demonstrated exactly how to do what is necessary in front of his goaltender for success.

“I think ‘Pross’ might have made more saves than me when we were in the zone, there,” Dubnyk said.