Stauber’s Goalcrease producing champions of all ages and gender.
Annual Goalie Show Saturday, May 3, from 10 a.m. to 3 p.m. 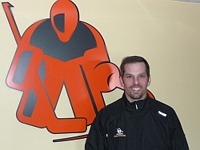 As the first goaltender to win the coveted Hobey Baker Award, given annually to the nation’s best collegiate men’s hockey player, Robb Stauber knows what it takes to be an elite player

Behind a tremendous work ethic and dedication to his craft, Stauber maximized his God-given talent to reach the game’s highest level, playing behind Wayne Gretzky in goal for the Los Angeles Kings. Stauber’s best season was in 1992-93, the year he helped the Kings reach the Stanley Cup Finals before falling to the Montreal Canadiens, and Conn Smythe Award winner Patrick Roy, in five games.

With his playing days over, Stauber’s Goalcrease Inc. was established to create a one-of-a-kind training center allowing passionate coaches the opportunity to train dedicated goalies on their journey to becoming a complete and powerful goalie, one who understands the commitment to reach their potential in the game of hockey and life.

Now known for his coaching acumen, Stauber’s labor, and that of his staff, bears championships at all age levels. To get a glimpse of how these champions are produced, head out to Stauber’s Goalcrease this Saturday, May 3, from 10 a.m. to 3 p.m. for its annual Goalie Show. 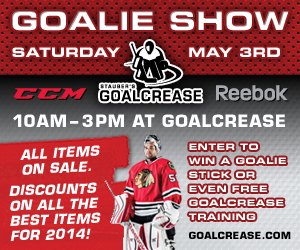 The Goalie Show not only includes an open house but also features a goalie equipment sale, equipment fitting and the opportunity to get on the ice to demo the latest products.  Drawings will be conducted for those in attendance to win a free CCM goalie stick as well as a training session with Goalcrease’s proven championship-producing staff.

This year, as he has done for the past nine in addition to running Goalcrease, Stauber coached the goalies for Team USA’s women’s hockey team in Sochi.

“I think the teams that win in the end are the ones that accept their roles — including the goalies,” said Stauber who is “King of the Goalie World” in the eyes of Team USA players. ”I see it as my responsibility to make sure that no matter who is called on, they are ready.”

One of the keys to coaching is knowing your players and working into their strengths. With Team USA for instance, Stauber said his three goalies all have different styles and different personalities: Vetter is unflappable, Schaus is analytical and McLaughlin is the most athletic.

“I view her as the perfect employee,” Stauber said of McLaughlin. “You make a suggestion to her, and her first words are, ‘I can do that.’”

“Last year at the world championships, she gave up a goal she did not want to give up,” Stauber said. “When I watched her, she was not doubting herself, she was collecting herself and when a goalie has that kind of demeanor, she seems to end up on the right end of a lot of games.”

Stauber takes that same mentality into his coaching at Goalcrease. The results continue to amaze as his Minnesota high school students rose to the top of the state of hockey, with most of the sectional winners having been Goalcrease-trained at some point.

The following is a list of the 15 Goalcrease students in 2014 who made it to the State tournament in Girls High School Hockey including:

On the boys side, the numbers were even higher, with 19 Goalcrease boy’s who made the trip to the High School state tourney including:

What is even more impressive is the list of players who won state titles at the youth level this year who trained with the Goalcrease staff.

Goalcrease goalies who took home a MN youth state championship in 2014 are:

Simply put, the proof is in the process, and the results in which they bear out. With so many champions, from so many different ages, it takes a special coach to be able to translate this message to such a variety of people.

Just like the greatest goalies in the world (ie. Tim Thomas, M-A Fleury, and Ryan Miller) all play differently-so do our finest students. The lists below reflect achievements made since 2002.