The competitive environment of youth sports too often has a way of bringing out the worst in its coaches, participants and spectators. Far too many are willing to go to great lengths to gain an edge in the name of winning. From coaches (and spectators) berating—or what they like to call “working”—the officials, to players utilizing aggressive tactics to “send a message” to an opponent, to spectator confrontations in the bleachers, it is all too common.

But every so often, likely far more frequently than is widely reported, something unexpected happens on the ice or field of play which warms the heart and restores one’s faith in the beauty and sanctity of youth athletics. Such was the case on a recent Saturday night in Fargo, ND in the midst of a tournament game between two bantam teams from Minnesota.

As rural Fergus Falls prepared for its third and final pool-play game to determine the tournament’s final-day seedings, Otters coach Devin Johnson could not have imagined how the rest of his night would unfold.

While his team was making its final preparations to head to the ice, Johnson turned to his goalie, Cole Mahler, to gauge how he was feeling. When Mahler, who was facing away from his coach, only faintly responded, Johnson gently turned his goaltender around only to reveal a face nearly as pale as the body-armor-concealing, home-white sweater he sported just inches below.

“As we were walking out the door for warm-ups, he ended up throwing up so we had to figure out what we were going to do from there,” Johnson said. 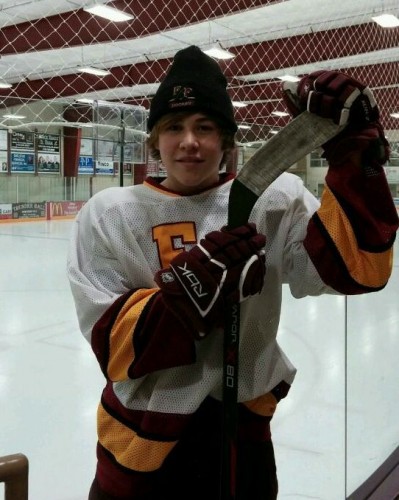 What Johnson, his staff and even his players did was turn to Bryce McGary, a defenseman who had donned goalie pads for the first time a week earlier when a cancelled game was converted into an open hockey session. McGary, who had tinkered with the position playing shinny hockey but had never officially suited up, took advantage of the opportunity to give the position a try.

“They all turned their heads and looked right at me,” McGary said. “I guess playing in one open hockey [session] can really help you.”

“He was really our only option,” Johnson said. “He said ‘I’ll do it’ so we found him equipment and went from there.”

It wasn’t exactly that easy, however. After the initial shock of his coach’s request wore off, McGary agreed to take one for the team under one non-negotiable condition.

“They were all telling me they were going to clean out his helmet and I told them I wasn’t going to do that,” McGary said. “So I told them to see if they could go get a helmet for me and I’m glad they did.”

Meanwhile the opposing locker room was empty as Chris LeClair, coach of suburban White Bear Lake, was on the bench watching his Bears warm up to play an opponent which had yet to arrive. Soon after, he was approached by Johnson, was informed of the situation and was asked for his help.

It was LeClair’s son Jacob’s turn to be the Bears’ backup goalie that day and Chris agreed to allow McGary to use Jacob’s helmet and extra stick while McGary provided his helmet to Jacob, allowing him to remain on the bench in compliance with USA Hockey rules.

After an approximately 15 minute delay, and with no chance to face a single warm-up shot, second-year bantam Bryce McGary, in what might be—barring a trip to district playoffs—the final tournament of his youth hockey career, stood alone in the blue paint for the very first time.

Though unnerved by his foreign surroundings, McGary said it was the reception he received as he entered the rink which occupied his mind.

“The only thought that was running through my head was White Bear Lake and how great their sportsmanship is and the parents supporting me,” McGary said. “Because as soon as I walked out of that locker room Jake was waiting for me … Their parents were cheering once I came out there and, I’m not sure if it was a White Bear parent or some other team, but they said good luck and opened the door for us.”

LeClair attempted to downplay the situation on his bench.

“We didn’t tell our boys that this was a replacement goalie for fear my kids would have stopped playing hockey,” Leclair said. “But they figured it out pretty quick; he had skater skates on and he wasn’t moving real well.”

After White Bear Lake surged to a 5-0 lead after one period, LeClair’s oldest son and assistant coach, Patrick, turned to his brother and suggested Jake go give McGary some pointers during the brief break. So Jake left the bench and anxiously made his way into “enemy” territory.

“I was actually kind of nervous that he would kind of reject me and tell me to go back to the bench,” Jake said, adding that Bryce, in fact, was eager for his help when he arrived. “I went over there and told him he was doing good for a person who has never been playing goalie before and just started making him mimic me, I guess, to see what he could do.”

“Really, I thought he was just going to see how his helmet was doing,” McGary said. “But he wanted to give me advice and show me how to slide and get up and slide; it really helped.

“It just surprised me that someone has the heart to do that, especially in a tournament.”

Jen Jones, mother of McGary’s teammate Damon Jones, captured the moment on video and shared it on Facebook.

The unsolicited gesture carried out by the LeClair brothers caught both benches off guard.

Said coach Johnson,“To see a game like hockey, how rough it is and how a lot of games end up getting chippy by the end of them, to see how he was willing to come over there and help him out, that was awesome.” 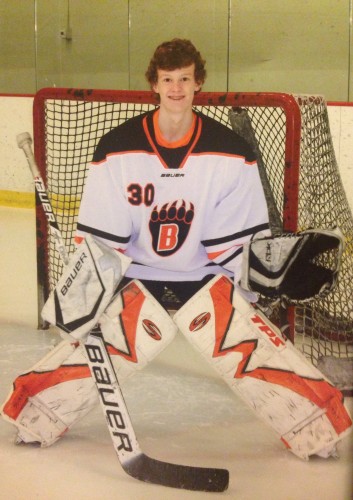 Jake, who also worried about Fergus Falls parent reaction before his first-intermission gesture, worked with Bryce again briefly during the lengthier second intermission and pointed out a couple of things he needed to work on. It did not go unnoticed in the bleachers above and that message was passed on to coach LeClair as his team made its way to the locker room for the second-intermission resurfacing.

“As we came off an older gentleman with a white beard was waiting for me at the door,” LeClair said. “He shook my hand with a tear in his eye and said it’s one of the nicest things he has ever seen and he really commended our whole team. We went into the locker room and I explained to the kids what that man said and it choked me up. My assistant coach who is kind of a tough guy, it brought a tear to his eye too.

“It was pretty inspiring. I’m a big hockey guy, I coach, I ref, I see a lot of stuff and it’s not often you see something like that.”

McGary’s mother, Anna, who spent the weekend shuttling between Fargo and Grand Forks where Bryce’s sister was playing in a tournament of her own, said this was the only game of the weekend she was unable to attend. However, she received no shortage of updates via text, picture and video messaging regarding the events unfolding just 80 miles south of her.

“What a classy team and what great sportsmanship to have that kid come over. As a mom, I teared up; I had goose bumps watching [the video] and watched it over and over. I shared it with everyone.”

“My favorite part is the knuckles,” mom added in reference to the boys engaging in a fist bump in the video prior to parting ways.

White Bear Lake ended up winning by a final score of 8-0, but McGary posted an .830 save percentage in his goaltending debut in turning aside a whopping 39 of 47 Bears’ shots aimed at him. More importantly, however, the Otters’ new backup goalie said he had fun.

“It wasn’t a close game by any means but everyone was having fun and people had a positive attitude,” coach Johnson said.

When the final horn sounded propelling White Bear Lake to the semifinals of a tournament they would eventually win, the obligatory post-game handshakes took on an added air of sincerity as players and coaches congratulated each other on a job well done.

Jake and Bryce traded words of appreciation and support as they re-exchanged helmets before parting ways, while Jake’s teammates waited to give the now former Fergus Falls goalie an additional pat on the back on his way to the locker room.

“It made me feel really good,” McGary said. “They’re just nice, full of sportsmanship and play a real game of hockey.”

“I try to teach [my boys] humility but I have not been practicing that; I’m very proud of what my two boys did,” LeClair said. “As parents, obviously we’ve done something right and taught them some sportsmanship.

As the Bears and the Otters left the ice, they were saluted with an ovation of mutual admiration from the game’s formerly partisan audience. The adults now cheered in unison, not simply for the result of a game or a game well played, but to express gratitude to young men from different teams and distant towns who provided them an emotional reminder of just how good youth sports can be.