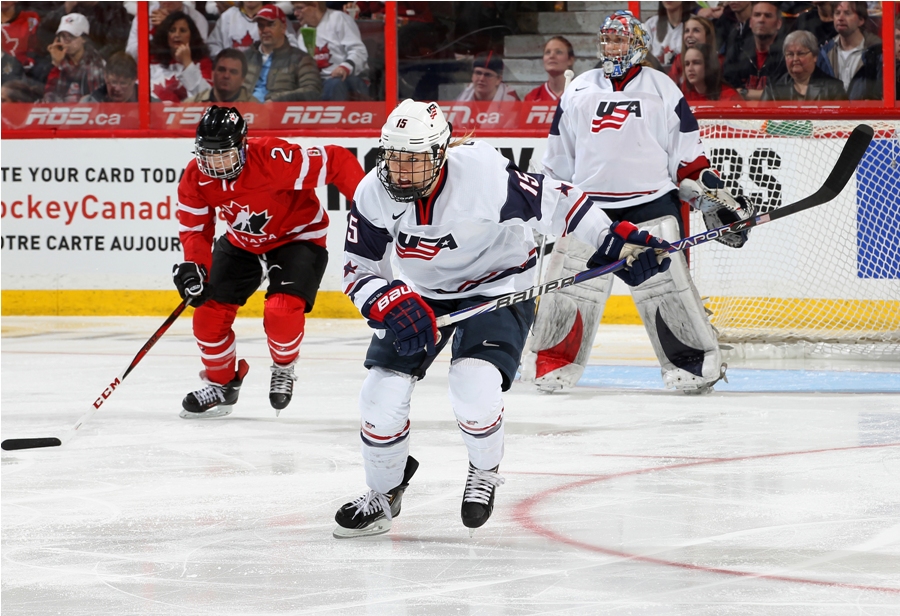 USA Hockey announced today that members of the Minnesota contingent of its Women’s Olympic Team have made a major equipment donation to some of the state’s youth hockey associations through the USA Hockey OneGoal program. Each designated association will receive 12 full sets of gear on behalf of current and former Gopher players prepping for their gold-medal pursuit in Sochi, Russia next month.

The players and their chosen associations are:

The donations are among 300 total sets of OneGoal starter equipment Team USA contributed to youth associations across the country. Former Gopher defenseman, and Illinois native, Megan Bozek made her donation to Chicago Blackhawks Youth Hockey.

“The Olympic dream began in many of these local hockey associations for our athletes and they never forget it,” said Dave Ogrean, executive director of USA Hockey in a release. “With the OneGoal program, they have an opportunity to help inspire a new generation of kids, while also saluting the people who helped them chase their Olympic dream.”

OneGoal is a nonprofit organization comprised of a coalition the National Hockey League (NHL), the NHL Players Association (NHLPA), the NHL Alumni Association, USA Hockey, Hockey Canada, rinks, Easton-Bell, Reebok-CCM, Bauer, retailers, and many others across North America who are involved with hockey.

The mission of OneGoal is to remove a barrier which prevents kids not only from trying hockey, but remaining in the game. The program was established to give as many kids as possible the chance to play by reducing the cost burden many parents face in equipping their children which factors highly in their decision to allow them to participate.

Schleper, who will be playing in her first Olympic Winter Games,  is happy to give back to the Dino Mights, an organization for which she has served as a volunteer.

“Every time I had the opportunity to volunteer there, I was immediately filled with laughter and joy,” she said. “I hope my donation becomes a great blessing to them and can help contribute to the wonderful standards they encourage every single day in their kids.

“Hockey gave me a way and a voice; all these kids need is an opportunity for the same.”

Scott Harman, executive director of the South Minneapolis-based Dino Mights, a physical, academic, social, and spiritual youth development program which utilizes hockey as an incentive for kids to succeed, said Schleper’s generosity will have a tremendous impact on his organization’s ability to promote hockey’s growth in the inner city.

“These are kids who come from families that don’t know about hockey, their parents didn’t play hockey and many of them are recent immigrants,” Harman said. “For us to be able to go visit those homes and say, ‘we’d like you to play hockey and guess what? Because of Anne Schleper, you get to have a brand new hockey bag, brand new shin guards and the whole deal,’ that’s just going to make it even better.”

“We’re really thankful and it makes us excited to cheer for Anne in the Olympics,” he added.

The kits come in two sizes—small and large—designed for players aged four to eight-years-old and include the following:

For those interested in purchasing and donating sets of gear to their own association or even another community where the need may be greater, visit OneGoal’s website. Time is limited, however, as the OneGoal program comes to an end Feb. 15 with equipment delivery taking place June/July 2014.